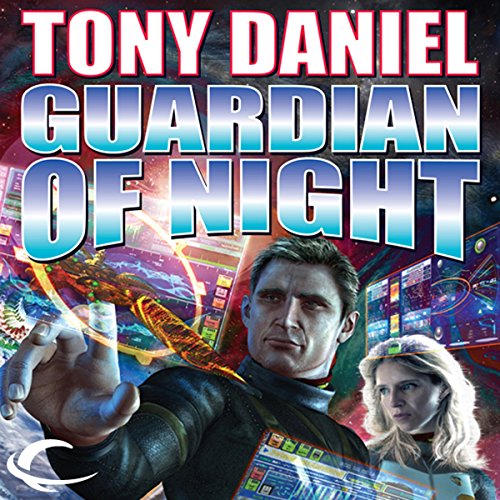 By: Tony Daniel
Narrated by: Victor Bevine
Try for $0.00

For alien Commander Arid Ricimer, there was no going home. His species was winning the war with Earth, but the civilization he had fought for was gone, destroyed from within by ideologues and bureaucrats. So he does the only thing that makes sense to a person of integrity—he attempts to defect to Earth with his officers and an entire spaceship, a vessel that mounts a superweapon of almost unimaginable power.

Hot on his heels is his former fleet, a force that has already devastated Earth once, and is poised to wipe humanity from existence forever, ready to do almost anything to deny Earth a chance.To the defenders of Earth he is an enigma—and potentially a Trojan horse. Yet after years of battling back from the brink of destruction, the U.S. space navy has the war-tested heroes to rise to the challenge Ricimer represents—and the danger that follows him—if only those in charge will listen.

The players are in motion and the greatest confrontation this sector of the galaxy has ever witnessed is at hand. Now all depends on the courage of an honorable alien warrior and the intelligence and daring of his human allies.

What listeners say about Guardian of Night

I had not read anything by Tony Daniel previously -- and have been unhappy with the last three books I've read. Too simple, or derivative. I keep looking for something like Dan Simmons' Hyperion series or Peter Hamilton's Commonweath/Void books. Something with a little "there" there. I also enjoy darker pieces like Alastair Renolds (Revelation Space) or Charles Stross' post-moderns (Halting State / Rule 34). I also like some good old fashioned military sci-fi like John Campbell's Lost Fleet, John Ringo's Aldenata Series (or his new Gate series).

This book was a breath of fresh air -- complex players, clever plotting, a hard science edge. It is a very good start to what I hope will develop into a great series. It is Military Sci-Fi (somewhere between Ringo and Campbell) but with a little complexity and darkness mixed in.

When I first started it, I thought: "Ok, bad aliens bomb earth. . ." But the characterization, clever (and well fleshed-out) aliens, and smart plot make this a cut well above the average. There is definately military sci-fi here -- and it is quick and intelligent. But there is also a well-laid foundation for broader thinking and deeper plots to come.

The conclusion builds well, and by the time you get there -- you are fully engaged in the action. This was a pleasure, and I hope that there will be more to come.

Hunt for Red October in space

I would. Tony Daniel is a great writer, even if the story is not incredibly original.

I liked the portrayal of the alien commander.

No; it was a little militaristic for my tastes. But it was very fun.

I wish they'd bring Tony Daniel's other books to Audible!! They're actually far better than this one!

While A little long winded and more then a little boring it grows on you as you get further in to it. By the end of the book it actually leaves you wanting more. My favorite part was when the dictatorship Toady finally got what was coming to him.

If you could sum up Guardian of Night in three words, what would they be?

I found the scene with Griff Leher, a quirky alien analyst, (my favorite character in the novel) when he found himself forced to step forward during the President’s war council if Earth would have any hope to survive the anticipated alien re-invasion to be the best in the novel. Captain Coalbridge stepping forward and offering bold support of Leher set the stage for the rest of the novel.

His pacing seemed on target.

What made the experience of listening to Guardian of Night the most enjoyable?

The narration was very well done as I find most of the books from Audible are.

The story takes place in an interesting universe and I was entertained by the technology that was developed and used. But I'd read this story / plot years ago in a book by Tom Clancy called

I found this very difficult to listen to. In fact, I have given up less than half way through, as I kept losing track, mainly through boredom. The narrator has rather a monotonous voice, which doesn't help matters. The premise is good, if somewhat hackneyed - Earth has been invaded, a plucky band of heroes is set on repelling the invaders, helped by a disaffected alien with his starship crew and Doomsday weapon, hotly pursued by his former colleagues. I love this kind of Space Opera normally, but for once, I just don't care whether it all ends happily, or Earth is blown up by the baddies after all. I've lost the will to listen to any more.