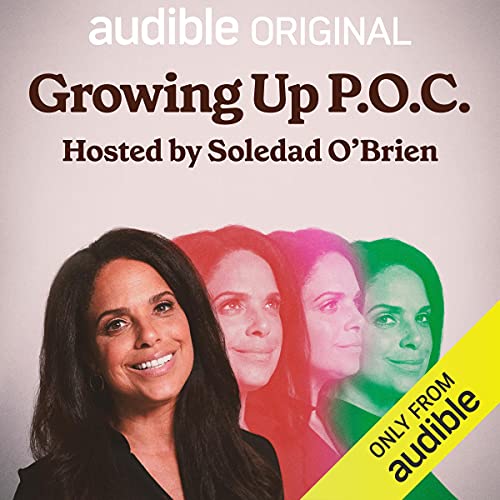 Soledad O'Brien on Growing Up P.O.C.

About the Creator and Host

Soledad O’Brien is an award-winning documentarian, journalist, speaker, author, philanthropist, and founder of Soledad O’Brien Productions, a multi-platform media production company dedicated to uncovering and producing empowering untold stories that look at race, class, wealth, opportunity, and poverty.
She anchors and produces the Hearst TV political magazine program Matter of Fact with Soledad O'Brien which reaches 95 percent of US households and has over 1 million viewers weekly, hosts the Quake Media podcast Very Opinionated with Soledad O’Brien, and is a correspondent for HBO’s Real Sports with Bryant Gumbel. Most recently, her company produced the series Disrupt and Dismantle for BET, Who Killed My Son? for Discovery+ and the documentaries Hungry to Learn and Outbreak: The First Response.
As a thought leader, O’Brien has over 1.3 million Twitter followers and is a frequent op-ed contributor to news outlets including The New York Times and The Huffington Post. Throughout her storied career, she has anchored news shows on CNN, MSNBC and NBC.
O’Brien’s work has been recognized with three Emmy awards, two George Foster Peabody Awards, three Gracie Awards, two Cine Awards and an Alfred I. DuPont Award. She is also the author of two books, her critically acclaimed memoir The Next Big Story and Latino in America.
In 2011, O’Brien and her husband, Brad, created the PowHERful Foundation to help young women get to and through college. The foundation hosts the PowHerful conferences that support hundreds of young women with mentoring programs, professional advice and other services.
Sunny Hostin
Alicia Garza
Tommy Orange
Marcus Samuelsson
Chad Sanders

Three-time Emmy Award-winner and New York Times best-selling author Sunny Hostin has co-hosted The View since 2016. Hostin previously served as a host and legal analyst at CNN. She is the author of I Am These Truths, a memoir, as well as the novel, Summer on the Bluffs. She began her career as an appellate law clerk and served as a federal prosecutor. A gifted storyteller, her depth of knowledge carries over to politics and the criminal justice system. Hostin resides in New York with her husband and two children.

Alicia Garza is a civil rights activist and co-creator of the Black Lives Matter Global Network. She currently serves as a senior advisor to the National Domestic Workers Alliance and is a principal at the Black Futures Lab. As a leading community organizer, she has worked in the service of health, student services, rights for domestic workers, ending police brutality and anti-racism. Garza’s editorial writing has appeared in The Guardian, The Nation, Rolling Stone, and Truthout.

Tommy Orange is an award-winning writer from Oakland, California. His first book There There received the 2019 American Book Award and was a finalist for the 2019 Pulitzer Prize. Orange is an enrolled member of the Cheyenne and Arapaho Tribes of Oklahoma. Orange resides in California with his wife and son. He is currently working on his second novel.

Marcus Samuelsson is the acclaimed chef and restaurateur behind an array of restaurants worldwide, including Red Rooster Harlem, MARCUS Montreal, Marcus B&P and Red Rooster Overtown. Samuelsson was born in Ethiopia and adopted by a family in Sweden, where he was raised. At 24, he became executive chef of Aquavit and went on to become the youngest chef to ever receive a three-star restaurant review from The New York Times. A frequent television presence, Samuelsson has appeared on Iron Chef, Chopped, and hosted The Inner Chef and urban Cuisine. He lives in Harlem with his wife and son.

Chad Sanders is a writer, director, actor, and musician. He is the author of Black Magic: What Black Leaders Learned from Trauma and Triumph. Sanders is currently a writer on Issa Rae’s forthcoming HBP Max series, Rap Sh!t. Sanders’ writing has also appeared in The New York Times and Time. As a screenwriter, he’s collaborated with Spike Lee, Morgan Freeman, and Will Packer. Sanders is a graduate of Morehouse College. He grew up in Silver Spring, Maryland and now resides in New York City.
ORIGINALS

Editor Michael loves nonfiction, memoirs, and feminist thought—and still can't decide what to listen to next.

We all connect with different listens at different stages of life. For new parents, explore the books that speak to you.

What listeners say about Growing Up P.O.C.

As a white guy who grew up in Wisconsin, it's great to hear the perspectives and lived experience of others. Too often some people think just because they didn't experience racism or hardship, that must mean that's how it is for everyone else. Stories like this reminds us to be more empathetic and understanding of each other.

Speaking truth to power! These are courageous conversations. I’m disappointed in the reviews above because the content & performance are engaging. Wish I’d been able to hear this when I was growing up.

Thanks for bringing us these stories. It's wonderful to hear from successful POC and their experiences.