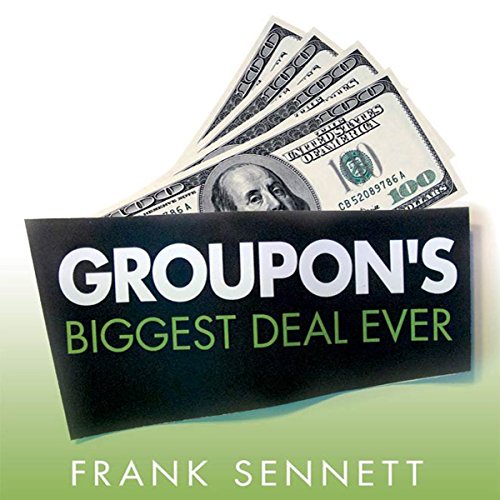 By: Frank Sennett
Narrated by: Bryan Kennedy
Try for $0.00

Groupon’s Biggest Deal Ever is the exclusive, behind-the-scenes account of the incredible rise of discount coupon giant Groupon and the compelling story of its offbeat founder, Andrew Mason, as he created a juggernaut of online commerce and ignited a consumer revolution that is disrupting how people shop all over the world.

Love him for saving you 50 percent on last night’s Indian dinner or hate him for cashing in big when he could be losing millions for merchants and investors alike, Mason - Groupon’s thirtysomething founder and CEO - made an incredible gamble when he turned down Google’s $6 billion buyout offer to go it alone. The experts thought he was insane. Groupon was little more than two years old and staffed from top to bottom with twentysomethings. The wild ride couldn’t last, but Mason thought otherwise, and with dreams of a potential IPO that could be massive, he liked his odds. But did he make the right decision, or did he blow a chance to continue to grow “the fastest growing company in history”? Is Mason an Internet genius, or is he sitting on another bubble that could burst at any moment? While everyone has an opinion on Groupon, Frank Sennett has written the only inside account. With exclusive access, interviews, and documents that no one outside of the company has seen or been able to report on, Groupon’s Biggest Deal Ever has every twist and turn from start-up to IPO and is the real story of Mason’s audacious gamble and the meteoric rise of Groupon from start-up to $16.7 billion online giant.

What listeners say about Groupon's Biggest Deal Ever

Seems I Read This Book a Week Too Early

A week after I read this book, the CEO was fired for performance. Surprise. While the book goes into some detail as to how Groupon found itself, it spent more time painting the CEO as child-coder who couldn't grow up and run a company...or get out of the way. So, the board did what he should have done...leave.

Overall, the narrator was fine, the story was ok, but with each chapter I found out less and less about Groupon and more about why Andrew Mason deserved what he got.