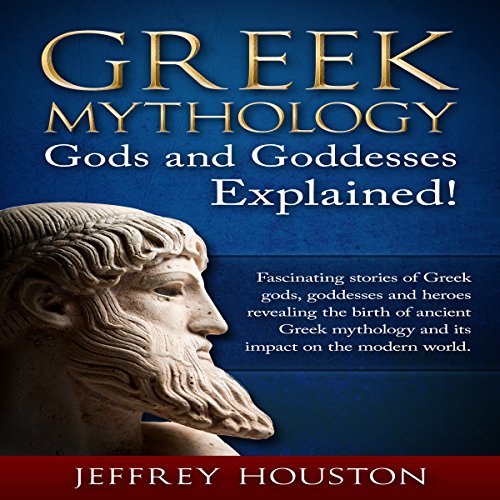 The subject of Greek mythology conjures up mythical stories of glorious and wonderful Greek gods, goddesses, and heroes with tales of war, love, and betrayal. Since ancient Greece was the birth place of philosophy, theater, and politics, it is understandable that such a great civilization would be capable of creating an elaborate belief system in which to help understand the world around them. Natural phenomena such as the sun, lightning, and earthquakes were explained in intriguing, engaging tales that formed the structure of ancient Greek understanding. It was this belief system that has been the fascination of many the world over.

Learn about Titans and the Olympians, the stories of their existence, and why they represented elements of the natural world.

Discover the most prominent Greek gods, why they were either titans or Olympians, and who the demigods and heroes really were. Hear enthralling stories of prominent gods are such as:

How are all these Greek mythology stories connected?

The study of these gods are both interesting and complex. In order to understand them it's necessary to understand how each story relates and the events that gave birth to further gods and their tales. This book delves a little deeper, highlighting the reason for the battles of the gods, the stories of their existence, and their relationship to natural phenomena.

Immerse yourself with in this wonderful ancient world and educate yourself with stories that will transport you into the mindset of this fascinating civilization!

There were too many inconsistencies in the stories and they were told with such a lack of depth and feeling they were hardly worth listening too.

Nothing new I did learn in Jr. High.

This like re- fresher coarse for what we studi rd in Jr. High. I didn't really glee any new from listening to this.

The audiobook Greek Mythology, Gods &amp; Goddesses Explained!: Fascinating Stories of Greek Gods, Goddesses &amp; Heroes Revealing the Birth of Ancient Greek Mythology &amp; Its Impact on the Modern World by Jeffrey Houston, Narrated by Mike Norgaard was one I have been looking forward to listening to for some time now. I have taught high school Spanish and English Lit and Composition for the past 18 years, which includes a marking period of Greek Mythology embedded in our Freshmen curriculum, through the teaching of The Illiad and The Odyssey. Let me start by saying that when I was in high school, I did NOT enjoy reading these two texts. I think it may have been because I had a difficult time understanding them. When I began teaching, I learned that not only would be revisiting the two texts I dreaded the most, but I also would be responsible for teaching them to teenagers who were in the position I once was. No! I vowed to do everything in my power to help them feel successful and enjoy themselves throughout this long unit of study. Through trial and error of many different strategies and techniques, I'm proud to say that our 9 week period on Greek Mythology is now a favorite among incoming high school students! Yay! I wanted to listen to this audiobook to see if there were any new ideas, stories, and/or information I could add to my lessons or bring back to the classroom.

This audiobook is just over an hour long. It is short, but it is filled with entertaining and informative stories of the gods. Some of the stories you may have heard before, and some may be completely new to you, but either way, they all have the same outcome. Through the stories, this outcome is revealed (how each god/goddess got to be the ruler of their domain) and why Greek Mythology is still relevant today. The main gods we are most familiar with are the ones who rule Mt. Olympus...the 12 Olympians. I understand why it is necessary to give background info on what came before them, but I would have liked to hear more about each of them, instead of so much on those we don't particularly put much focus on today. Though the stories of our favorite 12 gods were told, a short audiobook on each of the 12 Olympians would be awesome to listen to! My absolute favorite story is that of Persephone, Hades, and Demeter and how Persephone became Queen of the Underworld. It is also revealed in this story why we have seasons. I won't spoil it for you, but for those of you who know and love the story, it is toward the end of the book, so don't worry! Keep listening because it's coming! :-)

Narrator Mike Norgaard does an awesome job with this audiobook. His voice is inviting and perfect for storytelling. I was immediately engaged, and stayed so throughout! There are a couple names he pronounced differently than I do, but who really knows what's right? For all I know, I've been saying the name Circe (from The Odyssey) wrong for 18 years! But, because I listen on the Audible App, I was able to bookmark these places, and I can return to them anytime for further review . This is not the first time I have listened to a book narrated by Mr. Norgaard; I highly recommend his work. He has done a fantastic job in each of the books I have listened to and has quite a few of them! His performance is always professional, easy to listen to, and clear so that the listener never has to stop and say...&quot;Wait, what did he just say?&quot; Keep up the great work! If you keep narrating, I'll keep listening!

Although I do wish this book was made a little longer by elaborating on each of the 12 Olympians (and perhaps giving a little more focus to Athena), the information that was included was 5-star. It followed a chronological seqence and the stories told were among some of the most popular. It even tied in to The Illiad and The Odyssey. I recommend this book to those interested in a quick overview of Greek Mythology as a starting point, as well as to those who would just like to freshen up on the topic. It was an enjoyable listen. Thank you!

Thank you for reading my review. I hope it helped. :-)

Yes, but a little too short. Performance was pretty good, and well delivered. Not bad for a short walk thru Greek mythology.