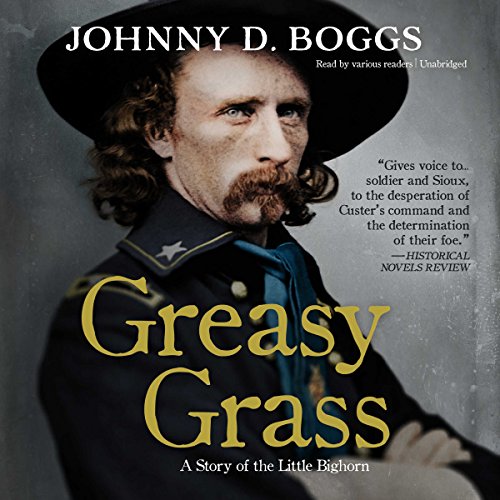 Johnny D. Boggs turns the battlefield itself into a character in this historical retelling of Custer's Last Stand, when George Custer led most of his command to annihilation at the Battle of the Little Bighorn in southern Montana in 1876.

More than 40 first-person narratives are used - Indian and white, military and civilian, men and women - to paint a panorama of the battle itself.

Boggs brings the events and personalities of the Battle of the Little Bighorn to life in a series of first-hand accounts.

What listeners say about Greasy Grass

This takes a whole different approach by weaving together the story of the Battle of the Little Big Horn by telling the story through different people that took part in the battle, both indian and white.

Best recreation of the Little Bighorn Battle that I have listened to or read. Understand why the author has been awarded prestigious western author distinction for 2020. Fantastic book!

The best book on The Little Big Horn I have read.

I have read a few books on The Little Big Horn battle and I thought this was by far the best one. I learn many things I had never heard before and was able to understand what happened with much more precision and clarity. I loved the first hand accounts.

I've only read a few books on The Little Bighorn but this one held my interest to the end. It was the way the author told the story in first person accounts, as if these long dead people suddenly came to life to tell what they knew. It was a sad story to be sure but I feel it was told as fairly as possible, not favoring any side. Even Reno didn't come out too badly. All in all it's my favorite book on the battle so far.