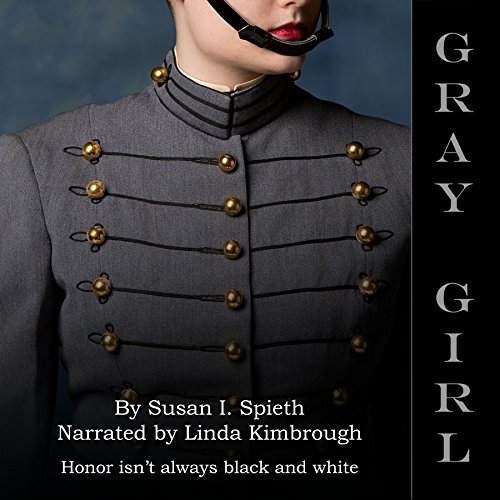 By: Susan I. Spieth
Narrated by: Linda Kimbrough
Free with a 30-day trial

2014 Eric Hoffer First Horizon Award Winner! 2014 Eric Hoffer e-book fiction Winner! Cadet Jan Wishart has been falsely accused of an honor violation at West Point. She believes her accuser is also a predator, guilty of a much more serious crime. At the honor trial, Jan must defend herself and try to reveal his guilt. Yet, two hundred years of fraternal brotherhood stand in the way.

The worst is yet to come when Jan and her roommate sneak out after Taps one night. Their discovery in an unauthorized area is more likely to get them kicked out—or killed. Jan realizes the grayness of West Point is not only in its buildings and uniforms. Even honor isn’t always black and white. Relying on her wits and a few friends in the hostile environment of the U.S. Military Academy, Jan discovers the value of friendship, the genuine marks of leadership and her own inner warrior.

What listeners say about Gray Girl

I got this from audiobook boom. This book was an exposition of what goes on in West Point. It shows that the gray wall extends past the uniform and the gray walls of the buildings. Even when they know that the guy is wrong they protect him. But you don't get into West Point if you don't have the right stuff and Jan proved that ingenuity, courage, common sense, and strategies would make her successful

Powerful book about the West Point experience from a female pov

This book brought back memories I tried hard to forget after almost 30 years. I felt like the author interviewed me and my roommates. Some of the stories happened almost exactly like she wrote. Other times I felt a kinship and somewhat relieved that I was not alone in how I perceived some/most of my experiences during plebe year. Thank you for writing this book. From one OG to another.

Entertaining weaving of intrigue and real life of cadet training. Fast moving and good interplay of past and present.

The plot line is intriguing and keeps the reader guessing until the end. I loved it and can't wait to read the next in this series.

“I was voluntarily provided this free review copy audiobook by the author, narrator, or publisher.

Such an AMAZING and enjoyable read. I thoroughly enjoyed it and can't wait for a sequel. Linda K. does a superb job at narrating and through her voice I was able to connect with each character in a way that made this story come alive. Great production to all involved! Bravo!

Would you consider the audio edition of Gray Girl to be better than the print version?

This audio version of Gray Girl truly brings out the story through Linda Kimbrough's beautiful pacing, vocal timbre, and timing. I can't imagine experiencing the book any other way.

Which character – as performed by Linda Kimbrough – was your favorite?

The main character of Jan as performed by Linda Kimbrough was very interesting to listen to. Her thoughts and dialogue propelled the story effectively and were relatable to listen along with.

As a whole, listening to this audiobook was a great experience. I would recommend this story to anyone who is looking for an empowering tale of a girl who fights against all odds.

Loved it. The story kept your attention, moved along well, yet had suspense and kept you guessing on a number of points. Really enjoyed this book.

Ms. Kimbrough is beautifully suited to narrate this story. Her velvety, textured voice is quite subtle, and she shows great facility in moving from character to character. If you are piqued by the topic and description of this story by Susan Spieth, you won't be disappointed by Ms. Kimbrough's vocal rendering of the text.

Great Listen, unless you went there, but still great

I was a plebe when Susan was a firstie, and was in her company. Was great to hear her tell the tale as someone I knew, but didn’t know yet. The story was great. The reader, didn’t get enough knowledge beforehand. She could have had a little coaching on some wording and pronunciation, but otherwise did a great job. Look forward to the entire series.

What an awesome story, I cannot wait to get onto the 2nd book! Great story of how women are/were treated in the armed services.