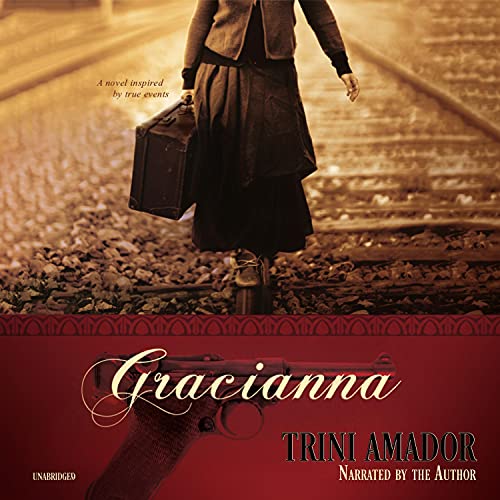 The gripping story of Gracianna - a French-Basque girl forced to make impossible decisions after being recruited into the French Resistance in Nazi-occupied Paris.

Gracianna is inspired by true events in the life of Trini Amador’s great-grandmother, Gracianna Lasaga. As an adult, Amador was haunted by the vivid memory of finding a loaded German Luger tucked away in a nightstand while wandering his great-grandmother’s home in Southern California. He was only four years old at the time, but the memory remained and he knew he had to explore the story behind the gun.

Decades later, Amador would delve into the remarkable odyssey of his Gracianna’s past, a road that led him to an incredible surprise. In Gracianna, Amador weaves fact and fiction to tell his great-grandmother’s story.

Gracianna bravely sets off to Paris in the early 1940s - on her way to America, she hopes - but is soon swept into the escalation of the war and the Nazi occupation of Paris. After chilling life-and-death struggles, she discovers that her missing sister has surfaced as a laborer in Auschwitz. When she finds an opportunity to fight back against the Nazis to try to free her sister, she takes it - even if it means using lethal force.

As Amador tells the imagined story of how his great-grandmother risked it all, he delivers richly drawn characters and a heart-wrenching pause-resister that listeners won’t soon forget.

What listeners say about Gracianna

Bravo to Trini for writing his family history down and sharing with the world. I regretted not picking up the book at the winery and so thankful to see on Amazon and even more to listen to the book read by Trini himself. What a treat! A gripping story of triumph and gratefulness. Thank you.

Wow. It’s rare that I listened to an audible and considered every sentence important

I would give it 10 stars if I could. Fascinating and informative. I’ve hardly heard of the Basque people cause I thought they were in Spain only but I looked at several maps to see it in France too. I also learned about the life of a sheep herder what a hard lonely life it appeared to be. The story seems so smooth and plausible and showed the nazis evil deeds when they occupied Paris. Much credit is due the resistance and those ‘nobodies” who bravely fought them. This is truly the greatest generation. Only problem with this audio is no time line. I didn’t know where they were in the war. When did book start? when did vital things in the book happen. I was lost and it mattered to me to have the timeline. But it doesn’t negate the fact that it was excellent. The author and narrator were some of best I’ve heard

Invisible heros surface from the depths of desperation. This tale of Basque resistance during World War II is richly detailed with vivid rendering.

This is a beautiful story narrated by the grandson of Gracianna. More than once, I was brought to tears. Very powerful, sometimes funny, but mainly a serious look at the life of someone I would have loved to have met.
Highly recommend. As a side note, I listened via Audible, but my husband read the book in record time. He loved it!