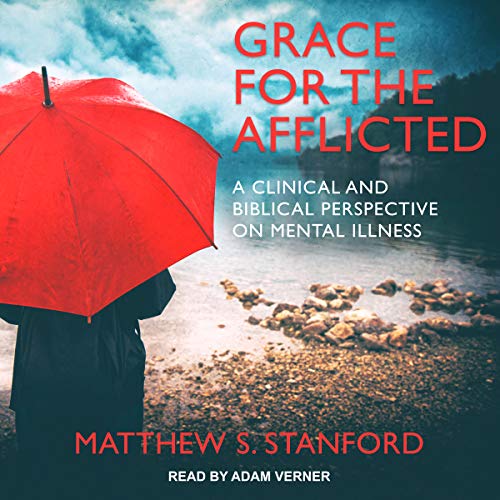 Grace for the Afflicted

By: Matthew S. Stanford
Narrated by: Adam Verner
Try for $0.00

Why has the church struggled in ministering to those with mental illnesses?

Each day men and women diagnosed with mental disorders are told they need to pray more and turn from their sin. Mental illness is equated with demonic possession, weak faith, and generational sin. As both a church leader and a professor of psychology and behavioral sciences, Michael S. Stanford has seen far too many mentally ill brothers and sisters damaged by well-meaning believers who respond to them out of fear or misinformation rather than grace.

Grace for the Afflicted educates Christians about mental illness from both biblical and scientific perspectives. Stanford presents insights into our physical and spiritual nature and discusses the appropriate role of psychology and psychiatry in the life of the believer. Describing common mental disorders, Stanford probes what science says and what the Bible says about each illness.

What listeners say about Grace for the Afflicted

The first chapter was great. Then went through the major mental disorders, just copy and pasting from the dsm which can be found on Wikipedia. The individual disorder chapters were not practical, nor did the go through the nuances of psychology and theology that I was hoping for. I would’ve liked it to dig deeper into those nuances I instead of describing the disorders. People with mental health issues already know the characteristics of their disorders.

In my search as a mom of a son with ADHD that has been struggling since his early teenage years with behavior, anger problems affecting school, family and pier selection. I realized that only discipline and consequences like typical parenting books were just not working. God humbled me to see that the problems were much deeper. ADHD can come with other disorders. I learned my sons behavior is not only executive function but a personality disorder. With this book I was able to look in depth of the various mental health issues and symptoms associated. God says seek wisdom, he answered my prayers. This book has both biblical and Medicine combined. I feel more educated and can
look for adequate team of experts to find the best care for my son. I learned that the sooner you start the better and that there is a future! Thank you!

Great Resource To share with our mental health culture

As someone who has been blessed with a mental illness and longing to help others in their journey by hosting a My 1st Mind Over Matter Mental Health and wellness on May 2, 2020, a Pastor relative recommended this great resource! I’m so thankful that he did and more grateful for having audible to read it to me!
Grace for the Afflicted is eye opening and fascinating sharing wonderful details of mental illness in the Bible as well as many current personal testimonies. Hearing stories of others struggles and what the the steps they took to overcome and successfully live with their mental illness has given me a new profound desire to get the word out that people with mental illness can rock!!! Thank you for such a wonderful, inspirational resource Mr. Stanford!

Insight into the human condition

This book gives a graceful insight into this human condtion which is overlooked. It pieces the heart of the hardhearted. Reveiling the silent suffering of the forgotton.

I bought this book looking for instructions on what Christians are expected to do in the face of mental illness. Thought this is covered, it’s only touched on in the final chapter, in brief and centred on American Resources. (I am not in America) however, it taught me a lot more than I expected to learn and is more useful in deconstructing the stigma around mental health. It would also be very informative for anyone who doesn’t know anything about a particular disorder. Eg. Schizophrenia- it’s saved you the google search time.

Samson was Bipolar or had a personality disorder?

I like that the author picks characters from the Bible to assess and match their symptoms with current mental medical diagnosis.
The voice is robotic I don’t like that but it is a great book. Every church should have this to end the stigma in the Christian Community.