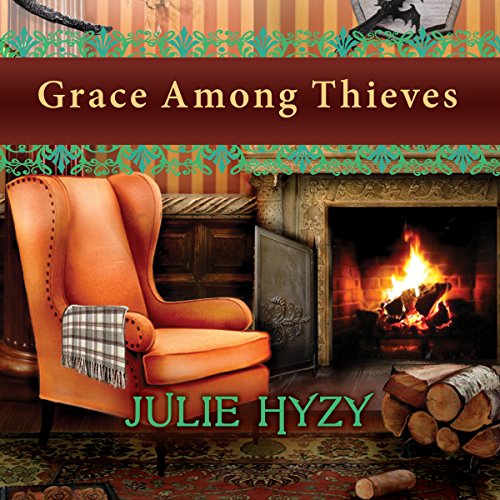 By: Julie Hyzy
Narrated by: Emily Durante
Try for $0.00

When Grace Wheaton's former professor calls to warn her that there have been a rash of thefts at various historical sites, Grace isn't surprised, because Marshfield Manor has been targeted, too. She wonders if it has something to do with the film crew roaming the grounds, digitally immortalizing the manor. But then she gets distracted by an incident much more dire: the shooting of one guest and the murder of another. Grace does her best not to go looking for trouble, but with a murderer on the loose, she can't seem to leave the dirty work to the cops - especially since the killer still seems to be lurking around town, waiting to finish the job of making Grace history.

"Hyzy's story is also well crafted with the many twists and turns that readers demand in a mystery, paired with an eccentric cast of characters." ( RT Book Reviews)

What listeners say about Grace Among Thieves

I loved the book, and the series. I just wish Audible would quit recommending series for which they don't have all the books.

I read the earlier books in this series and liked them. I was happy to discover they’re available on audible. The performance is really good.

Julie Hyzy writes another strong mystery set at Marshfield Manor, the giant estate where Grace Wheaton works as curator, in Grace among Thieves. Seeing a member of the public tour stray from the open area and get into a private closet, Grace and the security staff order that this woman not be allowed back onto the estate the next day unless she is accompanied at all times by someone else to keep her from entering restricted areas. The next day Grace gets a phone call from Nadia, a good friend who serves as curator of an estate in California similar to Marshfield Manor. Nadia's place has recently experienced a number of thefts that first began as minor and worked up to major thefts that took place during a distraction of the security guards. Nadia wants to warn Grace of the possibility of similar activity in Grace's North Carolina Emberstown.

Later that afternoon, Grace gets a radio message to rush to the red stairs. The woman who caused the disturbance the day before lies dead at the bottom of the stairs, with the member of her tour group who is acting as her escort having been shot in the arm. Suddenly realizing this could be a diversion, Grace orders an immediate inventory and discovers that a gold horn has been taken. Getting a glimpse of a man whom she is certain committed the murder, Grace begins to fear, especially as he makes appearances around her.

This book has a compelling, fast-moving plot with many layers of depth to the plot and the characters. Details that appear minor early in the book suddenly become significant. I also really enjoyed seeing the internal conflict of Grace as she tries to understand the nature of her relationship with Jack, who has hidden away from her and the rest of the world in the aftermath of the previous book. She then gets faced with a suitor in Mark Elroy, the man who was earlier shot. The book explores the nature of romance and coming to find in ourselves what we are looking for in a date. I also liked getting to see the attitude of Francis, Grace's secretary who at first viewed her with extreme hostility, change as she comes to recognize the strengths of Grace.

I enjoyed the audiobook performance of Emily Durante, who plays the part of Grace effectively in the book, as well as giving good voices for the other characters in the book as well. She does a particularly good job with the voice of Francis as well as Hillary, Bennett Marshfield's stepdaughter.

Grace among Thieves has a lot of strong details to the book, giving me a lot to appreciate. I like the way these books demonstrate that an excellent mystery does not have to have heavy gore, bad language, or graphic sex in order to be effective books. I liked this better than Grace Interrupted, though my favorite still has to be Grace under Pressure, the first book in the series. However, the high quality that the books exhibit would allow them to drop a lot in depth and still be excellent books. I give this book five stars.