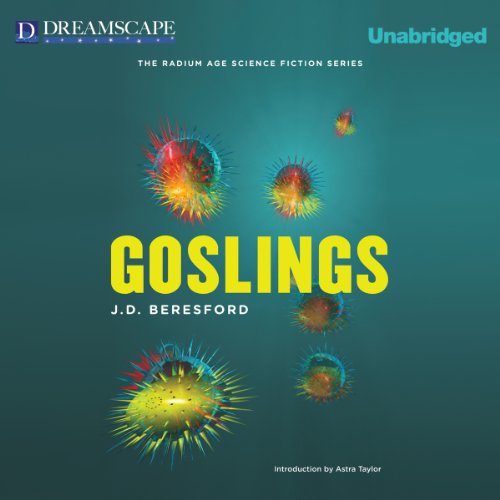 By: J.D. Beresford
Narrated by: Matthew Brenher
Try for $0.00

A global plague has decimated England's male population and the once-predictable Gosling family is now free to fulfill its long-frustrated desires. When Mr. Gosling leaves his family to peruse his sexual vices, the Gosling daughters, who lack experience and self-independence, find shelter in a matriarchal commune. However their new life is threatened by the community elders' views on free love.

What listeners say about Goslings

If you’ve listened to books by J.D. Beresford before, how does this one compare?

Have you listened to any of Matthew Brenher’s other performances before? How does this one compare?

Was Goslings worth the listening time?

Written in 1913, this odd novel long predates other British 'catastrophe' novels like 'The Day of the Triffids' and 'The Death of Grass'. Here a plague sweeps the world killing nearly all the men. How the few surviving men, and all the women, react makes for a very listenable (though quite frequent unintendedly hilarious) book. The lower middle class Gosling family in suburban London starts to starve amid the ensuing chaos and is torn apart - the father, a survivor, soon strikes out on his own & disappears from the book, taking up with a sturdy farmer's daughter who actually knows how to grow food and survive. His own wife and 2 daughters, all pretty useless cases, are forced to strike out on their own on an odyssey to find a community to take them in - this trip is very well done, on the whole. The proprieties of the day simply don't allow the author (or his characters) to explore the inevitable sexual consequences of the national situation; in particular, it seems not to occur to many of the women until a late stage that the most valuable commodity in the world is between the few surviving men's legs & that massive polyandry is the only option for survival. Despite all this, and despite the comical (to modern readers) sexual stereotyping, this is a splendid period piece, aided by the impressively gifted narrator, who can do all sorts of accents. It's a pity about the absurd 'deus ex machina' ending; one feels that Beresford simply ran out of steam.