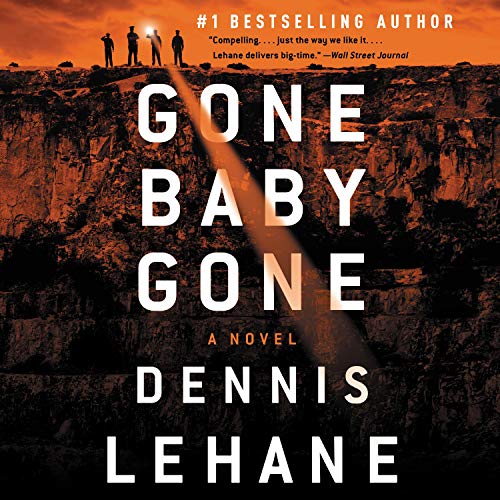 By: Dennis Lehane
Narrated by: Jonathan Davis
Try for $0.00

The tough neighborhood of Dorchester is no place for the innocent or the weak. A territory defined by hard heads and even harder luck, its streets are littered with the detritus of broken families, hearts, dreams. Now, one of its youngest is missing. Private investigators Patrick Kenzie and Angela Gennaro don't want the case. But after pleas from the child's aunt, they open an investigation that will ultimately risk everything - their relationship, their sanity, and even their lives - to find a little girl-lost.

I really liked this book and could not stop listening. Lehane writes genre fiction like fine literature (as does James Lee Burke, although their styles are completely different).Lehane's plots get complex and take some concentration in the last third, but they are always excellent. Great narrator as well.

but the subject matter and ending were depressing and dark.

The mystery was solved, but the end was depressing. The novel is about injustice, the poor, drug users, race and similar problems.

I love Lehane’s writing - the way he describes scenes, people, clothes, emotions, smells, - and his dialogue. I feel like I’m living it. It’s very full writing. I’d probably give it 5 stars if it had a more fulfilling ending.

Patrick and Angie investigate the kidnaping of a little girl with complications along the way. This is intricately plotted - twists and turns I didn’t expect. Bubba is my favorite character. I would have liked a larger role for him, but the story was about other things and was good.

The narrator Jonathan Davis was excellent.

I love Dennis and this story does not let me down

This is not a story to listen to when distracted, otherwise, you'll be going back to hear what you've missed several times. It can get intense. Otherwise, a very entertaining story and I loved it!

I am deeply ambivalent about Dennis Lehane.

Would you consider the audio edition of Gone, Baby, Gone to be better than the print version?

This is kind of a goofy question. I have almost stopped reading with my eyes, as I have discovered that the audiobook format is so much richer than just words on paper. Therefore, the audio version is always better than the print.

What was one of the most memorable moments of Gone, Baby, Gone?

I think that there is a very clear winner here. It is the scene(s) in the quarry where the massive force of the good guys is arrayed against the sneaky power of the bad guys. All are searching for Amanda, who has "gone missing." The setting is wonderful: the quarries are full of water, dark even in the daytime, very cold, full of mysterious channels, etc. Patrick and Angie have joined forces with the good guys, lawmen from all over Massachusetts, in a desperate attempt to trade the missing child for $200K. That is, if the missing child is even alive. The tension is heightened in a way that Mr. Lehane specializes in: anything can happen at any moment, and it frequently does. I will leave it to you to learn whether Amanda is dead or alive, found or kidnapped, etc. This is truly a marvelous mystery, written by a guy who knows his characters well, and who loves them. I am now glad that there is so much of Dennis Lehane to read, although my standing objection still rules: the full-size novels are too long by half. Hard to argue with serious success, though.

Jonathan Davis is truly marvelous, in many ways. The stock answer to this question is probably Patrick and Angie, who have a relationship which has held my interest through several novels. There are a whole bunch of ancillary characters whom Mr. Davis does in a masterly way: the repulsive Cheese Oleman, the slimy Chris Mullen (not the basketball player), the absolutely marvelous Bubba...I could go on. Mr. Davis's talents as a narrator are almost limitless. I would be disappointed to find another Dennis Lehane book that was not narrated by Jonathan Davis.

There are quite a number of scenes in which Patrick and Angie's relationship lifts up off the pages and soars. These two are trying very hard to live sane, sensible lives, but they are surrounded by the worst of Boston thuggery, at every level. Each case draws them into the mesh of those lives, and the palpable tension between wanting to leave to have a simple life versus staying in the Boston they know: they just can't decide.

I am now a confirmed Dennis Lehane fan. It has taken me a few books to fully appreciate the partnership between him and Jonathan Davis, but I do believe I have it now. I hope they keep doing this for a very long time.

Grabs you and won't let go.

If you could sum up Gone, Baby, Gone in three words, what would they be?

What was one of the most memorable moments of Gone, Baby, Gone?

Yes, but I didn't want it to end. So I savored it.

I have listened to 3 Dennis Lehane books. Love this authors stories. Have another one waiting. Don't know what Im going to do when I run out of credits/stories.

I love Dennis Lehane, I listen to almost all his books. Gone, baby, gone, was harder to listen than the other books from this series. The story is about child abductions and abuses. I found myself crying so hard at the cruelty of some man and women against children. The problem from this fictional book, is that it's not fictional at all.

I've waited for this for a long time!

I had a friend recommend Dennis Lehane, so I read The Given Day. It was an amazing account of post-WWI Boston. I loved his writing style. But I wanted to read one of his contemporary mysteries.

The author, Michael Koryta, said that he had read Gone, Baby, Gone, and it inspired him to become a writer. When I saw that this was finally available on Audible, I snapped it up. I was NOT disappointed.

The story was amazing. Just when it seemed that everything was falling into place the rug was pulled out from under me. I couldn't stop listening. It takes a great writer to make the sympathetic characters unlikable and still keep the reader engaged.

But for me, the best part was the elegant imagery. What could have been throw-away descriptives were anything but. Had I been reading this in book form, I would have been underlining and writing comments in the margins.

I look forward to reading more of Dennis Lehane. And I owe my friend a great big Thank You for the recommendation.

This book was a great disappointment. A large cast of characters to keep track of; way too much violence and all in all, truly depressing.
Nothing redeeming that I could find at all.

Bubba, is that really you?

This story is populated by people from working class Boston neighborhoods, but only a couple of them have any trace of the accent, and that inconsistently. The main characters sound like they grew up in the midwest, and even Bubba -- dear gawd, Bubba -- sounds off. He's got almost a southern tinge. Massachusetts in general and working class Boston in particular stand out for allegiance to the regional language features. I don't know if this was the producer's call or if the narrator made the decisions, but either way, the performance was severely compromised for me. I know the story well, have read the book multiple times, so this was a very big disappointment.

The story itself is very dark, but in a way that encourages thought about difficult subjects.

These characters should sound like they were born and raised in Boston. Consistently.

When Amanda's uncle finally realizes there's no more hope, and comes clean over a double Scotch.

The people who produce audiobooks should have a linguist or two on staff -- a sociolinguist (which yes, I am a trained academic linguist specializing in sociocultural language issues) could set them straight when they go off course like this. It happens far too often, and needn't happen at all.

Lehane has done it again...nice.

I became a "fan" of Lehane (Idk, do writers have "fans" OR, do their books actually have the fans by definition? like I said, Idk.) after Mystic River(the film) but I didn't know it yet, didn't know Lehane existed. Then The Wire(premium cable TV show) and then Gone Baby Gone(the film), Shutter Island(film), Boardwalk Empire (prem. cbl. TV show) and The Drop(film). Then I discovered Lehane here on audible(ty btw) with a book called Live By Night, unbeknownst to me there was a new gangster flick coming out w/the same name. So as I was reading/listening to it the film released and so I went to see it and loved it but NOWHERE NEAR as much as I loved the book. So I decided to find out which if any other novels of his became films, because that tells me if I like any of them I know I LOVE the books. I was floored by how many of my all time favorite movies and shows were Lehane novels first, or directly written by him. This is yet ANOTHER in a long list of great Lehane Novels turned films. Now I get to go explore the lives of the protagonists by reading the rest of the books in this series I have also found on Audible, it's THAT good!