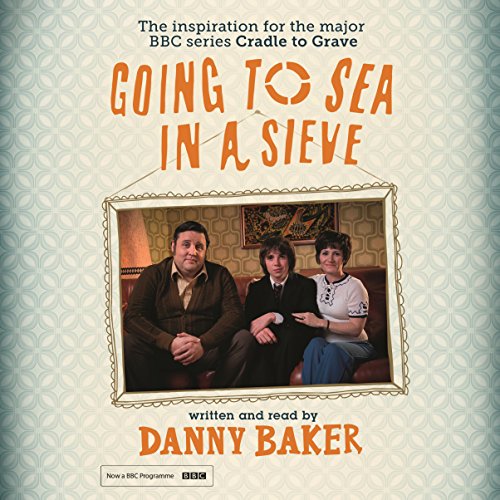 Going to Sea in a Sieve

Born in 1957 in Deptford, south London, Danny's first job after dropping out of school at the age of 15 was in One Stop Records, a small record shop in London's West End, frequented by Elton John and Mick Jagger, a store rather like the one in High Fidelity. His career in print journalism began in 1976 when he co-founded the fanzine Sniffin' Glue leading to an offer from the New Musical Express, where his first job was as a receptionist. Soon after, Baker was contributing regular astute articles, reviews and later interviews to the publication. Danny then began making 30-minute documentaries at LWT for the cult series 20th Century Box, and appeared in two television commercials: Daz washing powder and Mars bar chocolate. His stellar career on the radio began on BBC GLR in 1989, then moved to BBC Radio 5 where he presented sports shows including the ground-breaking 6-0-6, which still influences the media's approach to criticism of players, managers and referees.

He also worked on BBC Radio 1, back to BBC GLR, Talk Radio and later on Virgin Radio. On his return to BBC last May, Danny won 'Sony Radio Personality of the Year' and appeared on Desert Island Discs last July. Six months earlier he had gone public on his cancer and chemotherapy treatment, and thankfully all seems well.

Danny Baker currently presents a weekday show at BBC London 94.9, which features phone-ins and discussions with his on-air team regarding music and entertainment of the 1960s and 1970s, and a Saturday morning show on BBC Radio 5.This book charts Danny's showbiz career, the highs and lows, and everything in between, including the accusation that he killed Bob Marley...Read by Danny Baker.

What listeners say about Going to Sea in a Sieve

Danny Baker is such an engaging storyteller. If he read the phone book, he could it interesting.

The story about the shirt that Mark Bolan gave to him was priceless. And any time he quote his father.

Both laughed and cried...but mainly laughted, a lot!!

I really enjoyed this audio book and I can only hope that he will do one for his second book "Going Off Alarming".

Mouth of a docker life of a rocker

This is definitely better than the print version as hearing Danny Baker read it adds the full force of his personality to the book.

What other book might you compare Going to Sea in a Sieve to and why?

This is similar to 'Cider with Roadies' by Stuart Maconie. Not sure how either of these will play with a US audience as these are both UK-centric personalities but I would give both a go.

I like the way he managed to evoke growing up in London without rose-tinted spectacles or a Vaseline covered lens. This is no misery memoir just a celebration of a time when there were few TV channels and journalists used typewriters.

Mouth of a docker life of a rocker

Highlights include Danny Baker's recollections of working in One-Stop records and dealing with celebrities like Mark Bolan and Elton John and tales of owning the most intelligent dog in the world. Can't wait for the next volume

Great insight into living through the 60s and 70s.

A great cultural reference of life as a young person in the 60s and 70s. A selection of witty stories that celebrate the fun and innocence of growing up in a simpler time. Some really interesting tales of well known 70s superstars pre stardom and a great argument for the security developments that have since reduced the potential fiddles that a cash business has historically suffered. A good read!

The best one I have heard so far

Often very funny as you would expect, but also thought-provoking and nostalgic with just the right attention to detail. I have been a member of audible for quite a while now and I get through lots of audiobooks. This one is the best so far, by a long distance. If you enjoy his radio shows I would be very surprised if you didn't enjoy this. And this is one where I am absolutely certain that the audiobook version is preferable to the paper version, because it is narrated by Danny Baker himself. Very highly recommended.

Expected a lot after watching Cradle to the Grave and it delivered. Can't wait for the next installment.

Like A Night In The Pub With A Mate!

What did you like most about Going to Sea in a Sieve?

Danny Baker's narration. Its fab, he imbues the reading of his memoir with a real gusto! Danny and his family of chancer's seem to leap from the page. A really good, easy listen!

Any of his anecdotes would bring a smile to a statue's face but his recollection of his visit to the hippy musical, Hair, is hilarious!

A sense of immediacy, Danny is there telling you his anecdotes personally, just like a night in the boozer with an old mate.

A few but I don't want to ruin the book for other readers.

Danny Baker's love of life oozes through in this brilliant reading. He know's that he is a jammy sod for being in the right place at the right time but he seem's genuinely grateful for all the opportunities life has given him!

As Funny As Expected

Definitely, because it is read by the author and Danny is a consummate broadcaster

The very first paragraph .... had me laughing out loud and knew this was going to be a great book

Which character – as performed by Danny Baker – was your favourite?

Would recommend this to anyone, especially Brits in the late 40s to early 60s

What a fantastic autobiography and so well read by Danny. Wonderfully written with great wit and warmth without being at all over sentimental. His insight into the whole punk movement was extremely eye-opening and dispels many of the inaccuracies that are now so called "punk history".

Danny's father is portrayed extremely well. It is obvious that Danny and his father were extremely close and much loved.

I think this book could only be read by Danny himself, I don't think many other people could read it at the speed that he talks !

Made me laugh many, many times. His passage describing taking his Dad to the hospital was extremely poignant as well and made me cry.

Can't wait for Danny's next book. Maybe the likes of Jack Whitehall should take a leaf out of Dannys book and actually experience life and learn how to write before embarking on publishing.

I was aware of Danny Baker and remember him on the 6 O Clock show as a child, but was never a great fan. I only listened to the book because of a recommendation from a friend.

It is fantastic. Great raconteur, very well read and a torrent of laugh out loud moments.

What a great book

If you could sum up Going to Sea in a Sieve in three words, what would they be?

Such an interesting life

Did you know he gave Sting his first contract

No airs, no graces, just a cracking story.

Laying quietly by the pool then periodically laughing out loud or attempting to stifle out and out belly laughs. Do not listen to this in the quiet coach of a train.

It does not disappoint

If you could sum up Going to Sea in a Sieve in three words, what would they be?

Danny missing out on the Sex Pistols A&M release as he could get more tomorrow! He could not and they're now worth a fortune.

I most enjoyed the record shop scenes. I was buying records at this time and in these shops. I recognise the scenes and may have even bought a record off of Danny.

Some books have good stories but are narrated badly, some bad books are narrated well. This was a great story told as if in conversation with a mate. I could not stop listening and I was sorry when it ended. GET WRITING AGAIN DANNY!

Danny Baker is amazing! A true force of nature and his stories are brilliant. and compelling always.

absolutely the best audio book ever!

This is absolutely the best autobiographical audio book I have ever heard! Best Value ever!