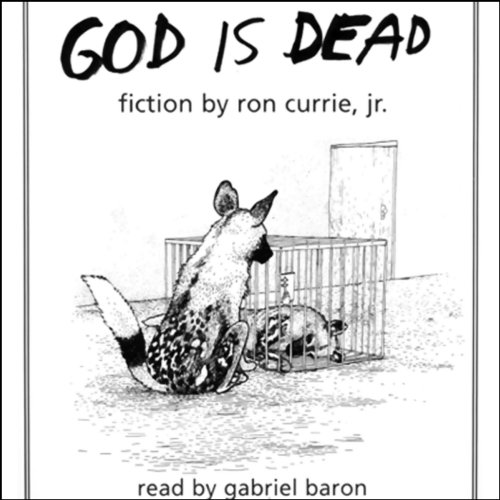 When God descends to earth as a Dinka woman from Sudan and subsequently dies in the Darfur desert, the result is a world bizarrely new yet eerily familiar.

In Ron Currie's provocative, wise, and emotionally resonant novel, we meet God himself, as well as the Dinka woman whose mortality He must suffer when He inhabits her body; people all over the world coping with the devastating news of God's demise; a group of young men who, fearing the end of the world, take fate into their own hands; mental patients who insist that a god still exists; armies taking up the eternal war between fate and free will; and parents who, in the absence of a deity and the "lack of anything to do on Sundays", worship their children.

On the surface, this is a world utterly transformed, yet certain things remain unchanged: protective parents clash with willful, idealistic teenagers; idols are exalted; small-town rumor mills run unabated; and children often don't realize how to forgive their parents until it's too late.

In God Is Dead, Currie brings together a prescient satirical gift worthy of Jonathan Swift, the raw appeal of Chuck Palahniuk's blackest comedy, and the thought-provoking ethical questions of Kurt Vonnegut, all with a light touch, empathy, and wisdom that make for an exhilarating experience. Offbeat yet accessible, God Is Dead is an exciting debut from a fresh new voice in contemporary fiction.

the narrator even changes his voice as he plays God, teenage boys, girls, women and young men. the voice meshed perfectly with the story and the psychology of the characters. fun read, especially the first chapter with God and Powell.

Although I realize that many a writer uses the ploy of not telling you all of the details, so you could fill in the blanks, imagine & use your own way of thinking as what might have happened or what is going to happen in the story as a way to present their art form, it does not work here very well with this book…I loved the title, I liked the idea of what the book was trying to say…I just feel the writer needed to say more, fill in more of the details…specially those that he mentions but never explains…the book feels somehow unfinished to me…perhaps there is a second or a series on the way…not sure…but the idea gets the cross just fine…I know what the writer feels, I feel most of it myself, I see it, we all do even though we may not admit to it often or ever…I suppose wanting more from a writer could also mean they did a great job, left you wanting more, that is not the case here…this one just feels undone…

I always love when you get to hear a truly refreshing story a unique perspective on this world. This story delivers! Very much enjoyed the voice of the story as well.

A bit short and the ending felt a little forced, but I enjoyed it all the same.

To be fair, I love Ron Currie, and the story was wonderfully interesting until the end. There were so many places that he could have taken the book and when it was over, all I could think was

What could Ron Currie have done to make this a more enjoyable book for you?

What does Gabriel Baron bring to the story that you wouldn’t experience if you just read the book?

He did a fine job, but I'm not sure that he added a considerable value to the story.

If you could play editor, what scene or scenes would you have cut from God Is Dead?

I would have cut the whole dog eating dinka woman/God thing out because it didn't go anywhere - it was a storyline that seemed like it was relevant, but ended up being a useless section. I kept hoping that the dogs would make an appearance later in the story and humanity would be able to recapture the Creator through that character.

The narration is good, but not amazing. I would still highly recommend listening to this book. Ron Currie Jr. is an amazing writer, and I have thoroughly enjoyed this book as well his other "Everything Matters". Fans of Kurt Vonnegut should give Ron Currie Jr a try.

I have thought about reading this book for months now, every time I see it. I find the idea very interesting and the book started well, looking at some of the crazy things people might do if they KNEW there was not God. But it bogged down in the end and I found the last few chapters did not do justice to the beginning.

This book started out OK but trailed off in the end.. sending one in too many directions and leaving us hanging.