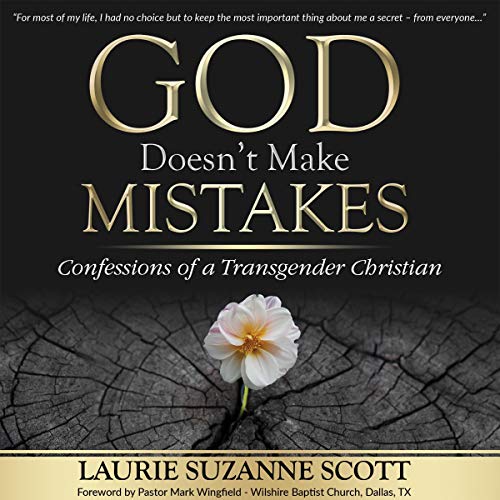 By: Laurie Suzanne Scott
Narrated by: Jodi Stapler
Try for $0.00

What do you do if you are an evangelical Christian, politically conservative, and transgender?

There is a struggle going on in our culture that produces more victims than champions - we all seem to agree on that. The growing divide between the political, ideological left vs. right and religious vs. secularist is so sharp that even attempting to bridge the gap is a perilous endeavor.

But what happens to the people who are scorned by both sides? Shut out by the left for their conservative views. Rejected by Christians for being transgender.

Meet Laurie Suzanne Scott. She is, indeed, both an evangelical Christian and transgender. Raised in a devoutly Christian home, she endured the unbelievably difficult and complicated odyssey of finding her identity as a woman...without losing her identity in Christ. A journey she barely survived.

In God Doesn't Make Mistakes: Confessions of a Transgender Christian, Laurie tells her story of growing up playing a role as unnatural to her as the body with which she was born. She was a living, breathing dichotomy...and there was no one who could understand. She had no choice but to keep up the pretense and keep it a secret.

She became a good son. A good Christian. And eventually, even a good husband. She knew if her true identity became known, she would lose everything. Everything. So she kept her secret from everyone. But she knew there was no keeping it from God.

Raised with a doctrine she believed condemned her, she decided the only way out of her constant misery was to end her life.

"Who would even want to stop me?" "Wouldn't it be easier for everyone this way?" It was at that desperate crossroad she heard the voice of God simply say, "You're okay."

Since that day, God has led her on a path to heal her deep wounds of rejection by family as well as other Christians and make peace with the way she was created.

Now, Laurie reaches out to Christians who are transgender, who are still struggling to believe God loves them for who they are...just as they are. It's a difficult and often emotionally exhausting ministry. Equally important are the efforts to help the Church see their Christian brothers and sisters who are transgender as simply their Christian brothers and sisters. Nothing more and nothing less.

Finally, she shares the much-needed message that God doesn't make mistakes and that it is possible to be a conservative, a Christian, and transgender.

The Power of God's Grace shines through this book!

I'm not sure where to start. This book hits so many important points for the Christian Community to examine more closely.

Jesus said, "As I have loved you, so you must love one another". Jesus loves us unconditionally. Even in our brokenness. He doesn't turn away from us. Why do we do that to one another?

This book taught me that a mismatched identity is no more a choice than spina bifida, left-handedness or a sanguine personality. It's just a reality that not every baby is knit together according to the original blueprint. It's easy to assume it's about sin or morality ...until you hear Laurie's story. Insisting transgender people conform to our idea of God's Plan is akin to insisting a person confined to a wheelchair get up and walk.

The experience of being Christian and Transgender

Our popular media would have us believe that all transgender people are liberal activists who demand acceptance from all corners of society. Nothing could be farther from the truth. Most transgender people want to live peaceful, quiet lives. For the transgender Christian, who is theologically and socially conservative and accepts the Word of God as the Word of God, simply living a quiet, peaceful life is very difficult. They do not want to “demand” acceptance, nor be a disruption in their congregation.

There’s an old saying which says, “The Christian army is the only army that shoots its wounded”. Instead of trying to provide spiritual first aid to a hurting brother or sister, many conservative Christians wound them further, or kill them. To be fair, these well-meaning Christians may feel that, based on their understanding and interpretation of Scripture, they are administering “tough love” to the wounded saint. The reality is that they drive a spike through the heart of the wounded saint and drive them from the Church. They seem to bar the door to the church to those who aren’t like them or whom they disapprove of, ignoring the words of Jesus, when He says, “Come to me, all who labor and are heavy laden, and I will give you rest.”

Laurie Scott tells her heart-wrenching story of her desire to serve the Lord, serve His Church and be in communion with a community of Believers. What she found was almost a “bait and switch” environment, where she was initially accepted, then wounded with cut after cut after cut, until she was compelled to flee from the communion of saints.

Many Christians are quick to recite the Scripture passage in John 3:16, where our Lord says, “For God so loved the world, that he gave his only Son, that whoever believes in him should not perish but have eternal life.” They should go to the next verse and memorize the rest of what Jesus of Nazareth said: “For God did not send his Son into the world to condemn the world, but in order that the world might be saved through him.”

Be prepared with a box of tissue paper close at hand when you start hearing Laurie’s passionate and gripping story.

Loved traveling with Laurie through her experiences from a transgender child to a transgender adult and the big transition into a woman- through the pain and rejection, she never lost her faith in God! It's amazing and inspiring!

I absolutely loved this book!

I really loved this book., As a Christian mother of 3 beautiful LGBTQ+ children this most definitely broadened my understanding of the struggles they may face as adults.

This book is so inspiring. As a transgender Christian, I a familiar with some of the struggles Laurie shares with us. God had already revealed to me that he supports me, but it is such a relief to learn I am not alone. Regardless if they are cis-gendered or transgendered all Christians who want to know about God's will for trans people should check this book out.

Just speechless! Our Lord is awesome! Inspirational!! And yet the masterpiece is not finished!!! Thank you very much for being a spiritual leader!!! Encouraged hope!!!

This book was simply “AMAZING.” Thank you Laurie for sharing. As a newly transitioned woman and clergy, this book was inspirational and encouraging.

This was an amazing story of honesty and vulnerability allowing the reader insight into her life. Thank you Laurie!

Want courage to live out your calling? Read this book and be inspired!!

As a conservative Christian I always try to avoid hitting the ground with a closed mental parachute -which can cause much damage to myself or others! Instead I decided to listen firstly with the eyes of love and an open heart & then evaluate with my mind. It is with this approach I encourage your read or listen to this book. While I find it did not answer ‘all’ of my questions, it was truly helpful and Laurie’s honorable candor and humility was very refreshing. Similar to ‘The Big Leap’ by G. Hendricks the story in ‘God Doesn’t Make Mistakes" will inspire you to be courageous in living the life you deep down know you were created to live -regardless of what that is.

Profound, Courageous, and very much needed

Laurie S. Scott wrote her story so powerfully. I'm confident that it will touch the hearts of anyone willing to open it. During a time when transgender people are demonized by the media and the majority of the christian community, it's hard to feel like a part of Christ's church as a transgender individual. Laurie stands as a beacon of hope for me and many others. I am so thankful for the opportunity to know her story.

This book has been written with honesty and sensitivity and tells of the challenges which the writer has had to face throughout her life. What I found sad was that those who should have shown love understanding and pastoral care and support were ignorant of her situation and were not there for her when she needed it most. I was so pleased that in the end Laurie seems to have found a church where she is clearly loved and welcomed into the congregation where she rightly belongs. Being transgender myself I was reduced to tears on several occasions. A must read xxx