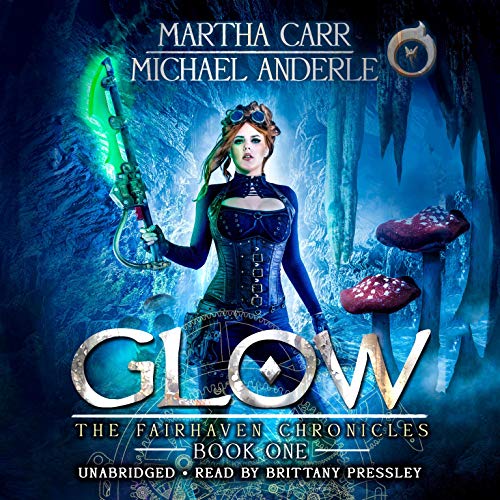 Glow: The Revelations of Oriceran

By: Michael Anderle,Martha Carr
Narrated by: Brittany Pressley
Try for $0.00

Everything you know is about to change.

Victoria Brie is getting her life together. She may be just a cashier, but she has big dreams and high hopes for what comes next. In the meantime, she has everything that matters: her family and her best friend.

If only life were that simple.

When she comes home to find her parents murdered by an elf — yeah, an elf — she’s thrust into a world of magic, mystery, and a madman who wants her dead. The question is… why? Merged with a powerful artifact created by an evil mastermind, Victoria is hunted, stabbed, burned, shot, and attacked in the street… but she’s a survivor, damn it, and no one’s taking her out. She falls in love with the magical underground city of Fairhaven, and when the elf who assassinated her parents comes after her new home, she not taking any prisoners.

This series is an enchanting urban fantasy saga with sarcastic ogres, wise-cracking wizards, and a brutally addictive full-contact sport called Berserk. Your only regret will be not starting it sooner.

WARNING! This story contains cursing because these eighteen-year-olds are honorable rebels. If cursing offends you, you might not like this book.

What listeners say about Glow: The Revelations of Oriceran

The main characters are two air-headed teen girls who never say a smart thing. The dialog is boring and uninspired. The plot, such as it is, seems incidental to the book. The idea that there is a hidden world full of magic right nearby is intriguing, but it isn't very well developed. It never feels real.

I get the feeling the authors got paid by the swear word.

Oh...I love the magic & characters in this town!

Glow: The Revelations of Oriceran
The Fairhaven Chronicles, Book 1
By: S. M. Boyce, Michael Anderle, Martha Carr
Narrated by: Brittany Pressley
This is a story of friendship, family, magic, and power. It's also a book about belonging. Two gals who have been friends forever must find a fantasy town and a wizard that lives there. I love this town! Great imagination! I would want to live here! Great plot, action, and it is just a lot of fun!
The narration is terrific too!

This story was a nice change. Having a simple human cursed with a dark artifact, yet able to use the power for good, was an incredible twist. Luac is a perfect asshole. Bertha is like the sweet old mother that loves her extended family. And Audrey is a character that has depth and a lot of possibilities.
Awesome job

Won’t listen to the next one

Missed the humor and robust storyline of Martha Carr’s first novels. The storyline is convoluted and slow. Victoria is an irritating character. Teenage angst with mourning & gnashing of teeth. The high pitched, ear splitting teenage narration is agonizingly, destructively, soul destroying. A disappointing YA novel from Martha Carr. I expected so much more. This book can’t compare on any level with her Leira Chronicles.

I found myself rather enjoying this story, Luak however has absolutely no redeeming qualities about him. Fairhaven is a rather intriguing place.

Another great addition to the universe. I love the new characters and location, I haven't read a bad book yet
The narrator Brittany Pressley was brilliant looking forward to the next one.