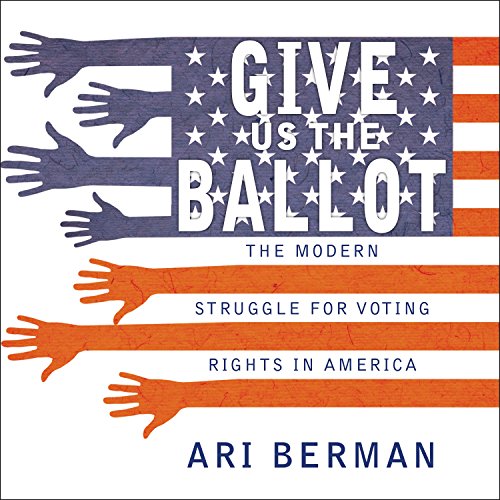 Give Us the Ballot

By: Ari Berman
Narrated by: Tom Zingarelli
Try for $0.00

The adoption of the landmark Voting Rights Act in 1965 enfranchised millions of Americans and is widely regarded as the crowning achievement of the civil rights movement. Yet fifty years later, we are still fighting heated battles over race, representation, and political power - over the right to vote, the central pillar of our democracy.

A groundbreaking narrative history of voting rights since 1965, Give Us the Ballot tells the story of what happened after the act was passed. Through meticulous archival research, fresh interviews with the leading participants in the ongoing struggle, and incisive on-the-ground reporting, Ari Berman chronicles the transformative impact the act had on American democracy and investigates how the fight over the right to vote has continued in the decades since. From new strategies to keep minorities out of the voting booth to cynical efforts to limit political representation by gerrymandering electoral districts to the Supreme Court's recent stunning decision that declared a key part of the Voting Rights Act itself unconstitutional, Berman tells the dramatic story of the pitched contest over the very heart of our democracy. At this important historical moment, Give Us the Ballot brings new insight to one of the most vital political and civil rights issues of our time.

"Not just a compelling history, but a cry for help in the recurring struggle to gain what is supposed to be an inalienable right." ( Kirkus, starred review)

What listeners say about Give Us the Ballot

I wanted so much to enjoy this book because the topic is very near and dear to me. With the current state of our nation, many rights of minorities and persons of color are being challenged daily, so it is important to understand the foundation of the voting rights act and all the history behind it. That said, this book is probably better read than listened to. There are too many historical dates, people, and places crammed into it and way too fast-paced to follow it well. Furthermore, it seems to skip around without following a past to present time line which may have worked better. The narration isn't bad, just moves way to fast and skips around. Sadly, this is the first audio book I wasn't able to finish.

This is definitely a worthwhile listen that covers Enfranchisement to Disenfranchisement to Enfranchisement again (to current possible Disenfranchisement). It starts with LBJ and the Voters Rights Act's beginning and lists every single struggle and slap in the face Blacks, the poor, the invisible have faced along the way to now.
There are heroes and most certainly villains, boos and cheers, and it's absolutely extraordinary that here, in what we'd like to believe is the World's Greatest Democracy, gross handling and mishandling of the law exists. We're supposed to be better than what this history chronicles. But obviously, we're not.
While most certainly a good book, "Give Us the Ballot" could've used some editing. I mean, truly, this is a book dedicated to the details of the horrific. At just over 12 hours, you get EVERYthing.
Still, it's an eye-opener, and it'll make you more motivated to be engaged in conversations being had by those in power. Because what they've done, whether it be gerrymandering to blatant voter suppression laws, makes you think of Big Brother states.
Wait a second. "They've"? Perhaps more like, "We've". After all, we've let them get away with it for a long, long time...

Must read for all Adults

I became a voter when I was 26. Not because I was not registered but because I never realized how important it was. After this book I now know how important it truly is to vote in every election. 20 years have gone by since my first vote. I never realized how much I took for granted such a simple gesture. How many worked so hard for that right and how it is slowly being taken away for so many. I plan on sharing this book with all my friends. No longer about an identification but limiting who they want to vote.

Berman gives an informative and engaging narrative of the struggle for voting rights in the US. This is a well researched account of the people, policies and politics that have promoted and threatened access to this fundamental right of every citizen.

Should be required reading.

Should be required reading for all citizens. Voting is a civic duty and should not be limited or prevented.

The author weaves a coherent narrative from chaotic events. I now see the peril posed by the voting impediments newly adopted or proposed and the relentless attacks on the Voting Rights Act. Ari made me an activist for the right to cast a vote that has a meaningful chance of impacting the outcome of an election. I am grateful Ari wrote this book and that I read it now.

Berman says that the 1965 Voting Rights Amendment spawned an equally committed group of counterrevolutionaries. Since the V.R.A.’s passage, they have waged a decades-long campaign to restrict voting right. Berman argues that these counterrevolutionaries have in recent years controlled a majority on the Supreme Court and have set their sights on undoing the accomplishment of the 1960s Civil Rights movement.

Berman explores how the debate over voting rights for the past 50 years has been a debate between two competing visions: Should the Voting Rights Act “simply provide access to the ballot,” as conservatives claim, or should it “police a much broader scope of the election system, which includes encouraging greater representation for African-American and other minority groups”? Every time the VRA comes up for renewal, from 1969 to 2006 the broader interpretation is endorsed by the Congress. The Supreme Court repeatedly responded by imposing the narrower interpretation by judicial fiat. Berman goes into great detail citing Supreme Court actions during this timeframe up to and including the Roberts’ Court to date.

Berman shows how various Republican Presidents chose to do nothing that would affect their standing with black votes except for the gradual redistricting to create majority white or black districts.

In 2013 the Supreme Court by a 5-4 vote struck down the formula Congress had adopted in 1965 and renewed for identifying jurisdictions subject to federal oversight. Chief Justice Roberts held that it violated the Constitution. In her blistering dissent Justice Ruth Bader Ginsburg said Congress, not the Court, had the constitutional authority to define progress in Voting Rights.

In 2014 fourteen States adopted voting restrictions. The numbers of voters potentially affected by new barriers to the ballot box exceeded the margin of victory in close races for Senate and Governors in North Carolina, Kansas, Virginia and Florida.
Berman provides a narrative history rather than constitutional analysis. He just documents what has happened to the V.R.A. and documented the shift from Congress to the Court of the V.R.A. The book contains so much information that I just provided you with some brief highlights to help you decide to read the book. This is a must read book for every voter in this country. Tom Zingarelli narrated the book.

Brilliant book on an essential subject

Ari Berman's history of the VRA's passage and the ballot wars that have subsequently ensued is complete, fascinating and fills one with desperate concern over ongoing attempts to undermine voting rights. Excellent. Must-read.

surprised at the low quality of this AB. sometimes skips back or forward in the text, and the break between parts 1 and 2 cut off a chapter (or more, not able to know). Going to seek a refund, and do not recommend you get this!

The Myth of democracy in 21st Century America

Shame on us all for allowing this to happen in the good old USA.. .