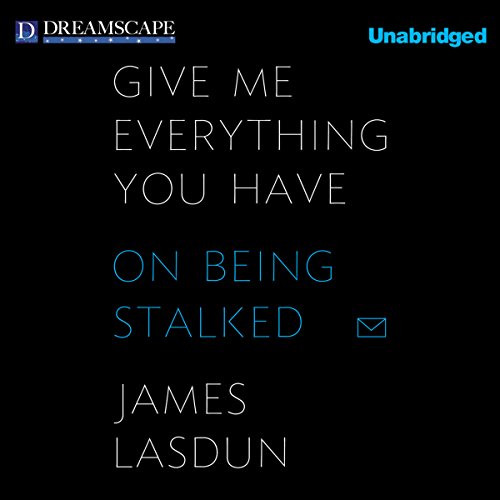 Give Me Everything You Have

By: James Lasdun
Narrated by: Robin Sachs
Try for $0.00

A true story of obsessive love turning to obsessive hate, Give Me Everything You Have chronicles the author's strange and harrowing ordeal at the hands of a former student, a self-styled "verbal terrorist", who began trying, in her words, to "ruin him". Hate mail, online postings, and public accusations of plagiarism and sexual misconduct were her weapons of choice, and as with more conventional terrorist weapons, proved remarkably difficult to combat.

James Lasdun's account, while terrifying, is told with compassion and humor, and brilliantly succeeds in turning a highly personal story into a profound meditation on subjects as varied as madness, race, Middle East politics, and the meaning of honor and reputation in the Internet age.

"This subtle, compassionate take on the subject is rife with insights into the current cyberculture's cult of anonymity, as well as the power, failure, and magic of writing." ( Publishers Weekly)
"A horrifying cautionary tale that reveals the vast dimensions of our vulnerability in the cyber age." ( Kirkus Reviews)
" Give Me Everything You Have is a reminder, as if any were needed, of how easily, since the arrival of the Internet, our peace can be troubled and our good name besmirched." (J. M. Coetzee, Nobel Prize-winning author of Diary of a Bad Year)

What listeners say about Give Me Everything You Have

Between the story, ramblings, and monotonous voice of the reader, I was put to sleep.

I read this to understand how a stalking situation develops. As I thought, the stalker doesn't wake up and decide to become a stalker; and no one thinks they are the bad person. The first part, which explained the development of the stalking mindset, was the best part for me. I enjoyed 90% of the book, though.

There were about 10 chapters (what, 2-5 minutes each) that I just skipped through because they weren't related to the stalking. They were nice and well written though, the pieces of them I heard.

I don't think rating a book the way you think it deserves makes you a "weird-o" and I gave it 5 stars. That was a silly reason for a reviewer to give it 3 stars. Who is on here judging that person anyway? That is weird. Maybe it's the stalker.

I think the author could have changed his email address. I think he fed her emotionally by replying. If he had stopped completely, after some number of years she probably would have stopped. How exciting to have someone write a book about you; she won.

Nothing every happened with the stalker. She is still out there. So many people die every day in car wrecks - why not her?

The narration was very good, too.

how do you rate a book like this? really...i mean. i can't say 5 stars it was awesome! it's about someone being cyber-stalked. that would make me a weird-o.

obviously, the story of Lasdun being terrorized by his former student is really horrible. at one point he talks about not being able to do anything (play with his kids, watch the news, writing a book) without his thoughts drifting to this cyber-abuse. i imagine that he became obsessed with this stalker, as she was obsessed with him. that is, i think, the scariest part of this entire tale.

there was a lot (A LOT) of this story that had nothing at all to do with his being stalked. it told the story of Lasdun's life...what types of books he liked, what fellow authors he respected, the relationship between him and his family. and if Lasdun wasn't an interesting fellow, or a good writer...these parts of the story would probably bore the reader who intended to learn solely of the stalking story. i found his writing very easy to absorb...i found him likeable and interesting....and so i cared about those parts as much as i cared about the stalking parts.

robin sachs did a great job narrating this book. played it straight, read it like it was.

i am glad that i listened to this. it definitely made me think about the world out there, and the insanity that some people have to deal with...it made me feel awfully sorry for Lasdun, his family and his colleagues.

This was an original approach to the experience of being stalked by an anti-semetic lunatic set on ruining him - via literary analysis.

Not to say I found Lasdun cold. I really felt his anxiety as it grew and how it wore him down. And he does well exposing the humiliation he felt as someone who was innocent but accused (of arranging a rape before he even met her, for example.)

There were times I caught myself rolling my eyes at the way that Lasdun tried to understand "Nasreen" (whose real identity has been outed on the Internet and is easily findable with a cursory google) through literature, starting with Gawain, the Green Knight, I kid you not. But Lasdun is a poet, so I guess Sylvia Plath, D.H. Lawrence and even ol' Gawain is where his thoughts naturally turn. (Patricia Highsmith too. I haven't thought of her in ages.) If he were a plumber, a more natural comparison might have occurred to him.

But still, worth the read.

I rather enjoyed hearing the parts that were about the stalking, but skipped other chapters

What disappointed you about Give Me Everything You Have?

THE BOOK WENT ON AND ON. THE AUTHOR WENT ON TANGENTS AND I FOUND MYSELF SKIPPING THRU PARTS OF THE BOOK THEY WERE SO BORING.

Has Give Me Everything You Have turned you off from other books in this genre?

WHAT GENRE? YOU MEAN BABBLING ABOUT NOTHING. I WAS EXPECTING A STORY NOT A LECTURE ON NOTHING.

Did Robin Sachs do a good job differentiating all the characters? How?

I DID NOT LIKE THIS READER. BUT MAYBE IT ISN'T HIS FAULT. HE IS ONLY TRYING TO READ A VERY BORING BOOK HE WAS JUST BORED LIKE I WAS.

YES IT WAS ONLY 7 HOURS. AND IN THE END I FELT I WASTED ALL OF THEM.

TELL A STORY. I DON'T WANT LECTURES. I WAS HOPING FOR A STORY ON STALKING WHERE THERE WAS DETECTIVE WORK AND THERE WAS AN ARREST. THIS BOOK WAS ONE OF THE WORST. I WILL ASK FOR MY MONEY BACK ON IT.