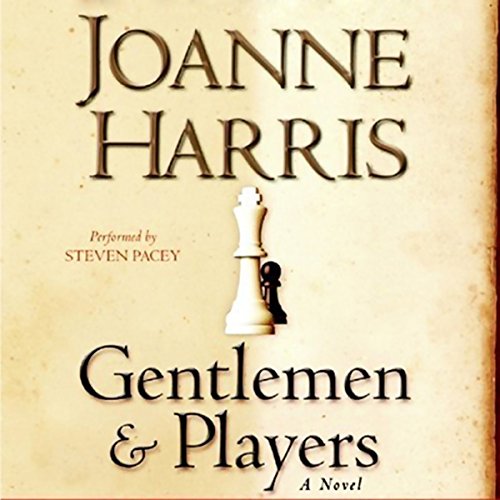 By: Joanne Harris
Narrated by: Steven Pacey
Try for $0.00

To dare, to strive, to conquer.

For generations, elite young men have attended St. Oswald's School for Boys, groomed for success by the likes of Roy Straitley, the eccentric classics teacher who has been a revered fixture for more than 30 years. But this year, things are different. Suits, paperwork, and Information Technology rule the world, and Straitley is reluctantly contemplating retirement. He is joined in this, his 99th, term by five new faculty members, including one who - unknown to Straitley and everyone else - holds intimate and dangerous knowledge of St. Ozzie's ways and secrets, it's comforts and conceits. Harboring dark ties to the school's past, this young teacher has arrived with one terrible goal: Destroy St. Oswald's.

As the new term gets underway, a number of incidents befall students and faculty alike. Beginning as small annoyances - a lost pen, a misplaced coffee mug - they soon escalate to the life threatening. With the school unraveling, only Straitley stands in the way of St. Ozzie's ruin. But the old man faces a formidable opponent - a master player with a strategy that has been meticulously planned to the final move.

"Best of all is a dazzling climactic twist...its last move is a winner." (The New York Times Book Review)
"Harris combines the conventions of the academic novel -its vicious politicking and rich dynamics - with the taut suspense of a thriller as she leaves tantalizing clues as to the perpetrator's identity....This is one hypnotic page-turner." (Booklist)

What listeners say about Gentlemen and Players

I could not put my ipod down. I shut my eyes and I was transported to a West End theatre where I was entertained by a cast of amazing characters. The reader was magnificent, the plot was top notch British--very dramatic, full of the intellectual.

I'm so glad I found this one. Fascinating villain, one worthy of association with Professor Moriarty and Hannibal Lector. Fabulous narration, really made the characters come alive. Fine story, most satisfying. In fact, before I listen to this one a second time, I'll definitely be exploring the other selections available by Joanne Harris, who's a happy new discovery for me. "Gentlemen and Players" is a darkly burnished psychological drama, gleaming like a sleek auto in the moonlight, purring to life when started, then accelerating thrillingly under its own power all the way to the end of the road. Don't miss the ride!

I really enjoyed this novel. In addition to being quite a good suspense story, it has all sorts of great little pieces of sly humor about educational bureaucracy and academic foibles. I loved it.

Four stars across the board

First Joanne Harris book..... I didn't think I would like it an hour or so in - But I slowly started to warm up to it. By the end - I was thinking I should listen to it again.

A fun and clever thriller set at St. Oswald's, a venerable exclusive private school for boys with a long history and a solid reputation. There are two narrators relating the story, the first being Roy Straitley, the Classics teacher with the heart of gold who is looking forward to his "century", i.e. his 100th term at the school, and the second being the now grown child of the school's former caretaker, who had developed an unhealthy fixation on the institution and one of it's students in pre-pubescence, and is now out to bring St. Oswald's down in a chaos of carefully orchestrated scandals and meticulously planned murders. We know from the very beginning that people will get killed, though we don't know who, why, how nor when, nor whether Straitley will end up as the hero who saves the day, or as one of the killer's victims... or possibly both?

Loved Steven Pacey's performance and will be on the lookout for more audiobooks narrated by him.

This is a revenge story in the extreme. Seeking payback for years of being invisible and irrelevant, "Snide", now reinvented as a novice instructor at St. Oswalds private school for boys, sets about manipulating teachers, students and administrators in an inticately planned plot to destroy the school. Half the story is told through Snide's eyes, including the childhood history that set current events in motion. The counterpoint is the narrative of Roy Straightly, classics professor and the one instructor who has the best chance of figuring out and stopping the plot.

This is not an action packed thriller, but a slowly paced, meticulouly detailed cat and mouse game in which the tension comes from knowing the POV of both the cat and the mouse. We don't know the current identity of Snide, so that becomes part of the guessing game. I actually did figure out who it must be about half way through, and from that point it was a matter of how to stop the cat from anihilating the mouse. Good twists, extremely well written and very well narrated. Small complaint that it got a bit talky at the point that Straightly confronts Snide - in the tradition of TV villians who give a monologue about why they have done what they've done. Wrapped up in an unconventional way that I'm not sure if I liked or not, but I do appreciate that the ending was not predictable.

At first, I thought I wasn't going to enjoy this, but after 30 minutes I became enthralled.

The writing was excellent! Vivid phrases and subtle sardonic humor permeate this book. There are several layers of mysteries which interlace nicely throughout the story. I suspected one, but was not sure until the end and was surprised by several twists!

The narrator was perfectly chosen. His voice and manor were perfectly suited to the witticisms and tongue in cheek humor. I found myself envisioning Rumpole. The book has 2 main characters both in 2 time-lines. I never had a problem distinguishing between them.

I am looking for books by this author and narrator! Yes, I recommend it!

I had to read G&P along with 3 other books for a sociology class I had and this audio book saved my life!