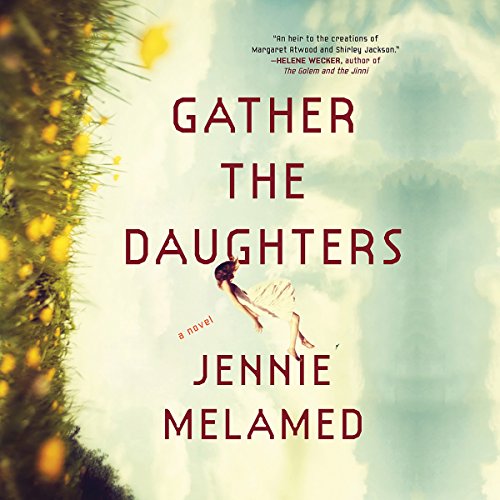 By: Jennie Melamed
Narrated by: Laurence Bouvard
Try for $0.00

Never Let Me Go meets The Giver in this haunting debut about a cult on an isolated island where nothing is as it seems.

Years ago, just before the country was incinerated to wasteland, 10 men and their families colonized an island off the coast. They built a radical society of ancestor worship, controlled breeding, and the strict rationing of knowledge and history. Only the Wanderers - chosen male descendants of the original 10 - are allowed to cross to the wastelands, where they scavenge for detritus among the still-smoldering fires.

The daughters of these men are wives-in-training. At the first sign of puberty, they face their Summer of Fruition, a ritualistic season that drags them from adolescence to matrimony. They have children, who have children, and when they are no longer useful, they take their final draught and die. But in the summer, the younger children reign supreme. With the adults indoors and the pubescent in Fruition, the children live wildly - they fight over food and shelter, free of their fathers' hands and their mothers' despair. And it is at the end of one summer that little Caitlin Jacob sees something so horrifying, so contradictory to the laws of the island, that she must share it with the others.

Born leader Janey Solomon steps up to seek the truth. At 17-years-old, Janey is so unwilling to become a woman, she is slowly starving herself to death. Trying urgently now to unravel the mysteries of the island and what lies beyond before her own demise, she attempts to lead an uprising of the girls that may be their undoing.

Gather the Daughters is a smoldering debut; dark and energetic, compulsively listenable, Melamed's novel announces her as an unforgettable new voice in fiction.

"Compulsive and suspenseful... This beautifully and carefully constructed work pulls no punches in its depiction of a bleak future; it will attract fans of Margaret Atwood's The Handmaid's Tale and readers who enjoy horror, suspense, and dystopian fiction." ( Library Journal )
"An intriguing, gorgeously realized and written novel which inexorably draws you into its dark heart." (Kate Hamer, author of The Girl in the Red Coat)
"Melamed is a masterful writer, and she establishes a hauntingly vivid atmosphere... This is a haunting work in the spirit of The Handmaid's Tale - but Melamed more than holds her own. Hopefully, her debut is a harbinger of more to come. Fearsome, vivid, and raw: Melamed's work describes a world of indoctrination and revolt." ( Kirkus )

What listeners say about Gather the Daughters

A gripping but disturbing read

One important thing about this book that wasn't obvious from the summary: Although the main characters are young teenage or prepubescent girls, it's definitely not a story for children and should not be read by someone who's sensitive to the subject of child abuse or sexual abuse.

That said, while the subject matter of this story was deeply disturbing, I felt it was done tastefully (at least as much as is possible) and the author stayed away from any graphic descriptions. Most of the horror comes not from the acts themselves but from how they're seen by members of the island's society as completely normal and mundane. It was well-written with compelling, fleshed out characters. The suspense was very well done to the point that I listened to most of the book in one go. I'll definitely be on the lookout for future books from Jennie Melamed.

My only criticism on the performance is that the dialogue for most of the girls was read in a very whiny, shrill voice that distracted me from the story. Janey was the worst offender, which is unfortunate since she has quite a bit of dialogue. Thankfully the narrator's normal voice isn't like that so most of it was fine.

I really did like the author's style but I wish she would cut off the last few chapters and keep working on it. This book had a lot of potential.

The premise is extremely disturbing. For a world this terrible I feel we are owed more feminist empowerment and revenge than was delivered. That being the case I wish I hadn't read it.

Narrator was very good except she chose a whiny voice for one of the main characters that didn't reflect her strength. Her normal voice was great as were many of her other choices.

Why write THIS story?

Every once in a while, I ask, “Why did the author feel the need to write THIS particular story?” I asked myself this question when I saw where the story was going. I read the author’s bio on Goodreads: “JENNIE MELAMED is a psychiatric nurse practitioner who specializes in working with traumatized children. During her doctoral work at the University of Washington, she investigated anthropological, biological, and cultural aspects of child abuse.” I think that answers the question.

SPOILERS AHEAD: So what we have is an apocalyptic event that took place maybe 50 or so years ago and some incestuous pedophile gathers some families on an island and isolates them from the “wastelands,” and creates his own religion. Other than the 10 wanderers (men) who go to the wastelands for various reasons, nobody knows a thing about what happened and what’s out there in the wasteland.

What they do know is that fathers have sex (rape) their daughters UNTIL their first period, at which point they are quickly married off to have two children. And if they have daughters, their husbands will have sex with the daughter. What they do know is men have all the power and women must submit to their husbands, get beaten up, and have to deal with hubby having sex with their own daughter.

While the subject was handled very well—nothing graphic—to CREATE a society with incest as one of the key tenants and then write an entire novel about it? It was just too much for me.

2 stars overall ONLY because the writing was so good, character’s had depth, excellent world building, etc.

Well-written, but not my preference

This book centered on a touchy subject and it's different. I wouldn't want to read it again, but if you aren't bothered by the underlying themes, then it's well-written.

Once you figure out the overall plot, it really just seems like an absurd venture into exploiting sexual abuse.

Initially the story had a lot of promise, but it left too many things unanswered. Mostly the incest, there was no real explanation for why that had to be included and came off as just a tool for shock value and like the author wanted to write a story rooted in incest. Again, could have been super interesting but just wasn’t throughly fleshed out. Also the narrator was terrible. She was fine when narrating the story but the voices the chose for the characters were awful. She made all the girls whiney and screechy so to the point where it was annoying and did not at all reflect the emotion they were trying to convey.

This book was a good read, very interesting but as I got deeper into the book the undertones were kind of disturbing. However, I did enjoy the story. The ending seemed somewhat abrupt and I felt like it needed to go on just a little longer.

had no idea this was about pedophilia

The summary does not indicate the actual gist of the story. I should have read the reviews.
Shame on me. I would not have purchased. Even knowing the author has dealt with childhood trauma victims does not help that this is an odd story and disappointing at best.

It was hard for me to finish this book. Nothing like Handmaid's Tale . Relationship with fathers and daughters were disturbing.

Set Up for a Series

It's an interesting if uncomfortable concept, and definitely engaging. I got into it very quickly. However, the real conflict of the story is never resolved and the big questions are never answered. Most likely slated for a sequel, as a stand alone book, this left me disappointed.