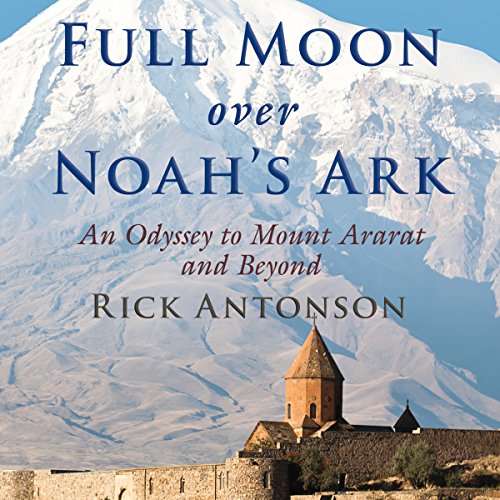 By: Rick Antonson
Narrated by: James Conlan
Try for $0.00

Mount Ararat is the most fabled mountain in the world. For millennia, this massif in eastern Turkey has been rumored as the resting place of Noah's Ark following the Great Flood. But it also plays a significant role in the longstanding conflict between Turkey and Armenia.

Author Rick Antonson joined a five-member expedition to the mountain's nearly 17,000-foot summit, trekking alongside a contingent of Armenians, for whom Mount Ararat is the stolen symbol of their country. Antonson weaves vivid historical anecdote with unexpected travel vignettes, whether tracing earlier mountaineering attempts on the peak, recounting the genocide of Armenians and its unresolved debate, or depicting the Kurds' ambitions for their own nation's borders, which some say should include Mount Ararat.

What unfolds in Full Moon Over Noah's Ark is one man's odyssey, a tale told through many stories. Starting with the flooding of the Black Sea in 5600 BCE, through to the Epic of Gilgamesh and the contrasting narratives of the Great Flood known to followers of the Judaic, Christian, and Islamic religions, Full Moon Over Noah's Ark takes listeners along with Antonson through the shadows and broad landscapes of Turkey, Iraq, Iran and Armenia, shedding light on a troubled but fascinating area of the world.

Skyhorse Publishing, as well as our Arcade imprint, are proud to publish a broad range of books for listeners interested in history - books about World War II, the Third Reich, Hitler and his henchmen, the JFK assassination, conspiracies, the American Civil War, the American Revolution, gladiators, Vikings, ancient Rome, medieval times, the old West, and much more. While not every title we publish becomes a New York Times best-seller or a national best-seller, we are committed to books on subjects that are sometimes overlooked and to authors whose work might not otherwise find a home.

“It’s not just about the journey, or standard travel writing. It’s about story-telling, and Rick takes us on a magical, almost mystical adventure to destinations once only shrouded in mythology.” (Peter Greenburg, travel editor, CBS News)

“A book filled with the enthusiasm of discovery, the delight in accomplishment, and the relief of return.” (Kirkus Reviews)

What listeners say about Full Moon over Noah's Ark

The story moves laboriously through the research and early planning, and even the early travel. I gave up. My time is more valuable than this book.