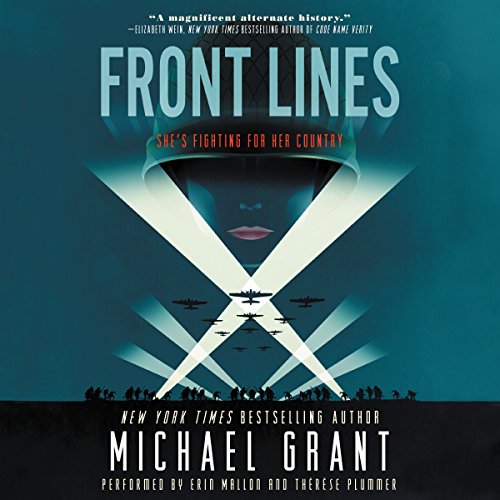 By: Michael Grant
Narrated by: Erin Mallon,Therese Plummer
Try for $0.00

World War II, 1942. A court decision makes women subject to the draft and eligible for service. The unproven American army is going up against the greatest fighting force ever assembled: the armed forces of Nazi Germany.

Three girls sign up to fight. Rio Richlin, Frangie Marr, and Rainy Schulterman are average girls, girls with dreams and aspirations, at the start of their lives, at the start of their loves. Each has her own reasons for volunteering: Rio fights to honor her sister; Frangie needs money for her family; Rainy wants to kill Germans. For the first time they leave behind their homes and families - to go to war.

These three daring young women will play their parts in the war to defeat evil and save the human race. As the fate of the world hangs in the balance, they will discover the roles that define them on the front lines. They will fight the greatest war the world has ever known.

What listeners say about Front Lines

Fantastic story. I listened long after I should have been sleeping because I was so caught up in the stories of these women. The narration was OK. Her range of voices is limited, so many of the characters sounds the same. A few times I felt her tone was off, too, especially during some of the boot camp scenes. Her voice didn't seem to match how it seemed the author intended for the character to sound. Would highly recommend the story, but be prepared to be underwhelmed by the performance.

I loved the gender bender going on here!! Please please release the other two books in this series. This is a gold trinity!! Therese Plummer is such a talented narrator. Huge fan of both author and narrator!!

this was a very good. I love books that show women who are strong. who are willing to be just as strong as men if given the chance.