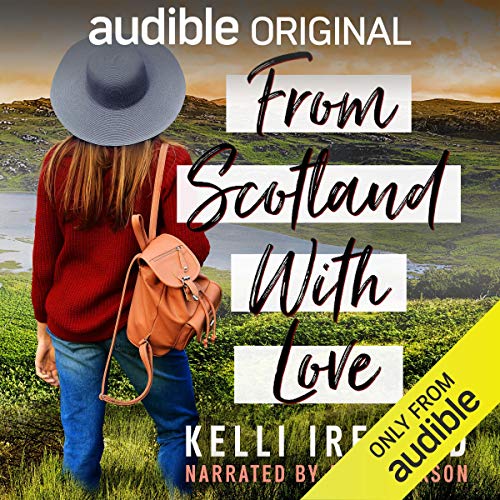 From Scotland with Love

By: Kelli Ireland
Narrated by: Ava Erickson
Try for $0.00

Escape to Scotland in this funny, heartfelt audio-first romance about reconnecting with an old love...and discovering new passion.

After her boyfriend runs off to a Buddhist monastery, Molly is stuck with an extra ticket for a bed-and-breakfast trip through the Scottish Highlands. Not wanting to waste the fare, she sells it in an online auction...where it's bought by a man from her past. Now she's stuck rooming with the guy who broke her heart - someone she's never been able to forget.

When Alex arrives in Scotland and discovers that he unknowingly purchased a romantic getaway with his ex-girlfriend, he knows he should walk away. Spending two weeks at a bed-and-breakfast in the Scottish Highlands with his beautiful, spirited ex is a terrible idea. He came to Scotland with one goal in mind - to win an elite photojournalism competition - and Molly is a distraction he can't afford.

But as the stunning Scottish Highlands weaves its magic, Alex's and Molly's hearts begin to open once again. Can they let go of their past for the second shot of a lifetime?

What listeners say about From Scotland with Love

Are you kidding me

Spoiler alert
Who leaves a country when there companion goes missing without calling the hospitals, or calling the police! She let him sit there all alone.

This book should be titled "Two American People Fall In Love." Besides the barely described setting, this book has very little to do with Scotland. The reader does an excellent drunk voice but can't do a Scottish accent AT ALL.
The book felt more like a random compliation of romance tropes than a real story. Characters lack background, depth and personality. And they love each other... just because they do? And are both really hot? And they fell in love offscreen so we should just believe it because they have history?
The 'twist' revealed at the end is obvious a few chapters in. It was agonizing to hear the author try to build suspense by prolonging what she clearly thought was going to be a huge shocker for the audience.
I'm honestly very forgiving when it comes to romance novels but this one was just such a dud.

I can't help but feel this was written by a very young woman for very young women. If you are about 16-24, it should hold your interest. Simple, sweet plot--young love. Not enough complexity or life experience in these two characters for me.

A Lot of Sweet - A Little Heat

From Scotland With Love starts off with Molly, our heroine, coming home to an empty apartment - as in devoid of any stuff. When she finds her boyfriend he tells her that he is leaving and needed to sell her things to pay for his trip to Tibet where he is finding himself and becoming a monk, after all renting a Sherpa is not cheap. Molly who is about to leave for a trip to Scotland for a journalism contest now has an extra ticket and auctions it off online. She gets more than she bargained for when it’s bought by Alex, her photographer ex boyfriend who’s entering the same contest for his own reasons.

I love Ava Erickson as a narrator. I always love her performances, in this book she does not quite get the accent right and though it may bother some overall I didn’t think it detracted too much from the book. I gave her 5 stars though because she took a book that had I been reading would have fallen flat for me - she added depth and personality to an otherwise fluffy book.

From Scotland With Love by Kelli Ireland is a good example of the foundation of romance books. It has heart, heat, humor and emotional connection to readers/listeners. I gave it four stars overall because although it does have the foundation I felt more could have been built on it. It’s not going to change your world, but the book did have its moments. While it was not one of my favorite romance books it did make me smile. It’s an easy listen and entertaining. If you have the romance package it’s a good one to listen to.

Loved this book so much had to keep listening to it when I was home. The family couldn't understand why I was walking around with headphones!!!

had just enough Romance, humor and heartbreak. super easy to listen to and to follow. I would suggest it for anyone looking for a good book to warm the soul.

Just LOVED this story, it's clear the author wrote it from heart. Brilliant, just brilliant

How is this even popular??

I’m surprised I made it past the first chapter. I listened to 70% of the book because I thought maybe it will get better.. NOPE. The main characters never really connected and their stories just too odd. She was painfully annoying and weak. I think part of that was the narrator reading like a whiny child. I also hated that she went from disliking him to instant sex at hearing that his nephew was sick. Like all of a sudden that made him a better person. I was also fed up with someone constantly getting hurt. This author needs to work on her storylines.

From Scotland with Love

This was a wonderful read. Puts your faith in forever. The players are real and human