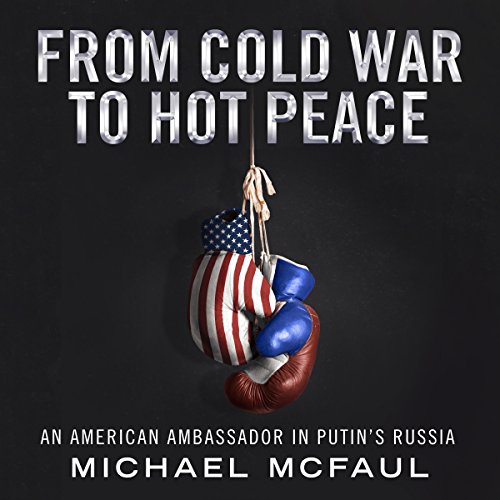 From Cold War to Hot Peace

In 2008, when Michael McFaul was asked to leave his perch at Stanford and join an unlikely presidential campaign, he had no idea that he would find himself at the beating heart of one of today's most contentious and consequential international relationships. As President Barack Obama's adviser on Russian affairs, McFaul helped craft the United States' policy known as "reset" that fostered new and unprecedented collaboration between the two countries. And then, as US ambassador to Russia from 2012 to 2014, he had a front-row seat when this fleeting, hopeful moment crumbled with Vladimir Putin's return to the presidency. This riveting inside account combines history and memoir to tell the full story of US-Russia relations from the fall of the Soviet Union to the new rise of the hostile, paranoid Russian president. From the first days of McFaul's ambassadorship, the Kremlin actively sought to discredit and undermine him, hassling him with tactics that included dispatching protesters to his front gates, slandering him on state media, and tightly surveilling him, his staff, and his family.

From Cold War to Hot Peace is an essential account of the most consequential global confrontation of our time.

“This is an indispensable book for understanding the threat our country faces from Vladimir Putin’s Russia. McFaul is a candid and insightful guide to the history, personalities, and politics that continue to shape one of America’s most consequential relationships.” (Hillary Rodham Clinton, former Secretary of State under Barack Obama (2009-2013))

"Mike McFaul has lived history. In this terrific book, he recounts a pivotal time in U.S.-Russian relations, bringing the perspective of a central participant and one of America's finest scholars of Russian politics. This book will be valued by students, experts, historians and diplomats for years to come. It is a good read and an invaluable contribution at a crucial time." (Condoleezza Rice, former Secretary of State under George W. Bush (2005-2009))

What listeners say about From Cold War to Hot Peace

recommend reading / listening for everyone

Helps to understand what went on while I was not engaged with world events. Thank you for such an inspiring book.

Excellent Tutorial on History and Diplomacy

VERY ENGAGING. The reading was wonderful. I am sure it made this very large book manageable. 10 days of commuting is all it took. When would I have found the time to actually read (paper/Kindle) almost 600 pages. My husband is trying, but his reading is selective via index topics.

From Russia With Love

From Cold War to Hot Peace, An American Ambassador in Putin’s Russia, written by Michael McFaul, and read by L. J. Ganser. This is a wonderful and complete retelling of international foreign policy during the Obama presidency. You learn how issues become the focus of an administration, at least those issues in which Professor McFaul was involved, how the problems are defined, and how those delineations depend more on the prior learning or experience of the president and his experts rather than some mathematical formula. Hint: Learn the meaning of the word gestalt before you take on this read.

Now, my recommendation is not to purchase and read (listen) to the book unless you are a learned and avid political scientist or international historian with an interest in inter-nation dealings. This is not a titillating book in and of itself. This is though, a truly learned outlay of what happened, why, what worked, and what did not.

The subject matters covered were, Prof. McFaul’s education and early professorial years, the Russian Reset at the beginning of the Obama presidency, the Arab Spring, the Libya conflict, Prof. McFaul’s return to Russia as Ambassador, Russian civic unrest, Putin’s return to the Russian Federacy presidency, the taking of Crimea and the unrest in the Ukrainian, in almost all those reviews, not only do we get a readout on Obama’s actions and thoughts, but we also get a readout on Putin’s position, and a deep set of suppositions as to what might have been Putin’s thoughts and perspective; as well as his objectives. I found particularly interesting, how Putin filled the Russian people, with venality with which Putin poisons the Russian people with hatred for others. Something like our present presidency here in the U.S., but in Putin’s case he controls all forms of information to his people. Fascinating. Oh yes, and there is a long discussion on Professor McFaul’s use of social media, including Twitter, a never before used diplomatic tool was a kick.

I came to this book having great respect for the analysis of Professor McFaul. After the read, my appreciation of his gift of political analysis has only increased. He put the book together as a story, which does not read like a novel, but rather a history of his interchange with Russia and its beloved people. It is an analysis of what happened and perhaps why.

At the end of the book, a little over one hour of reading, Professor McFaul provides a wrap up of what is the status of U.S. Russian affairs, how we got here, what should we do from here. Those of you that have followed the Professor will be surprised at his new-found perspective. The book is worth reading (if you are a political science nerd). Its last hour plus is essential if you want to know where we go from here in U.S. vs. Russia. Nevertheless, I still intend to re-read all my Dostoyevsky.

Informative about US/Russia relations, but I found the presentation belligerent, giving McFaul a mantel of self-centeredness.

This book reminds us, Vladimir Putin has and never will be our friend. And even more important we must never allow Russians ie. Vladimir Putin the outrageous request to interrogate ANY American! He is a thug who kills anyone who speak against him. He even kills in other countries!
They can have Trump!

This book is an informative and insightful first hand history of the relationship between the USA and Russia, starting at the end of the last century. Ambassador McFaul is an engaging and credible author, and he writes with a non academic style, despite his academic achievement. I found the early chapters, that detail his experiences as a college student in Russia, to be just a bit dry, but that section of the book lays down a nice context for the rest of the book. I for one, did not know that Russia had such energy in that era around the establishment of democracy. With Russia continually occupying our news feeds this book provides valuable information to allow one to judge current events with a degree of rationalism.

it offers a unique perspective on our complex relationship with Russia. A very important work.

For someone that has worked in Russia and studied the language, history and culture this is a fascinating insight into the start of democracy in Russia and the Obama era policy and engagement. Then of course the decline in the relations when Putin come back into power. Incredible life and experiences McFaul had on the front line of it all.

McFall’s book is an important mile post in characterizing and chronicling the history of what took place between Russia and the United States since the 1985. Putin has clearly influenced this relationship and no one can document it more clearly and better than a first-hand observer and policymaker who has been involved with Russia for over 30 years. As an academic, statesman, diplomat, and intelligent thinker on the subject, MM presents a long, and comprehensive treatment of the relationship with Russia and its decline in the last 15 years since Putney has been its leader; de facto and otherwise. This is an important book that every American should read.

A lot to listen to. Time of detail laid out in chronological order so it takes closer listening to follow it all. Enjoyed this book.