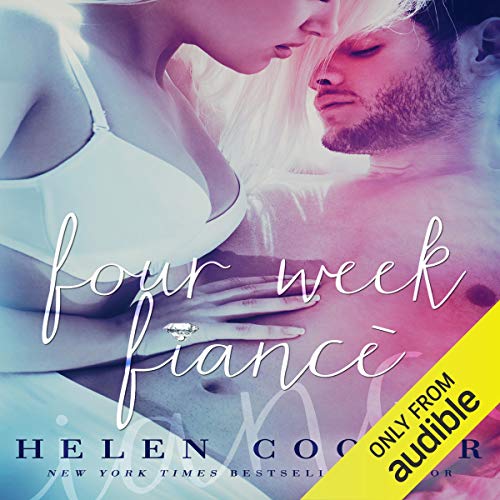 What would you do if the hottest man on Earth made you an offer you couldn't refuse?

What if it was the offer of a lifetime? The sort of offer that would make you blush as he offered you whatever you wanted to make you accept. What if the offers were so spicy, so naughty, and so scandalous that you wouldn't even want to tell your best friend?

If you were me, you would say yes.

There are three things you should know: His name is TJ Walker. He's 28, hot as can be, and he's my brother's best friend.

TJ asked me to be his fiancé for four weeks. I'm hoping to make the engagement real.

Most of the book surrounded around a weekend at the lake with no point to it whatsoever and the four week fiancé part didn’t start until there was about an hour and a half left of the book. Very high schoolish, kind of want my time back.

Boo! How old are these idiots?

This was a waste of time, the main character was supposed to be a 22 year old college graduate and should have developed some maturity but she behaved like a 15 year old there is too much inner conversations. The dialogue was very juvenile which made it hard to finish, and when I did, I thought "that's time I can't get back"

To slow and drawn out and lead to nothing

This was written for a teenager.....The flow of the story to slow...weekend took several chapters. ...finally when relationship to next step book was over...good idea for a story. ...but written very poorly.

I love all of JS Coopers book BUT this one. It's so slow and too high school for romance.

Don’t waste your time with this one.

I almost stopped listening before the book was finished. The characters were childish and the book was cheesy.

I would of given it 0 stars if I had the option. The story was pointless.

There Are Light, Laugh Out Loud Moments, Spicy Scenes, And Wickedly Suspenseful Twists In This Brother’s Best Friend Romance!


This is the first book in the Four Week Fiancé series. It is TJ and Mila’s story; it ends in a cliffhanger. Their story continues in Four Week Fiancé 2. The final book of the series follows Cody and Sally, their best friends.

Mila Brookstone, twenty-two, is an enigma. She is both a realist and a dreamer. A recent college grad, she worked her way up from secretary to an assistant job in the buying department of her family’s business. The new job was not accompanied with a pay increase and she is frustrated that she isn’t allowed to make actual decisions. She wants more responsibility, but her father is concerned about being accused of nepotism. She spends too much for her meager earnings and is messy, very unlike her organized best friend Sally. They’ve been friends since kindergarten and share everything, but they won’t attempt living together again. It hadn’t worked out well when they tried it in college. Sally happens to be in love with Cody, Mila’s older brother. Cody, however, is too busy with his playboy lifestyle to pay her any attention. Mila has had a crush of her own for years. Her brother’s best friend makes her want to hit him and kiss him at the same time. Each fall her family spends a weekend at their lake house. Mila’s best memories have happened there, in part due to the fact that her brother’s best friend normally attends, too. She is a woman now, a working college grad, but she knows it is up to her to make the first move so this year she has a plan to seduce him. Finding Mila’s enthusiasm infectious, Sally has ideas of her own.

TJ Walker, twenty-eight, is a millionaire in his own right thanks to an inheritance from his grandparents. But he lives in the shadow of his billionaire father. The nonchalant playboy smiles for the cameras, but TJ knows it is all a façade; underneath his father’s public persona is a cold and calculating man. Both TJ and his father’s wealth has caused more than few to try to latch on to TJ, and he shudders when anyone wants to talk about his famous father. He has been best friends with Cody for twenty years, though, and their friendship is tried and true. They both enjoy a playboy lifestyle while working for their fathers . Cody does the accounting for his family business, which has hit hard times during the dip in the economy. TJ works for his father, too. He has plans for expansion and cost savings that will put the company in a strong position going forward, but his cheapskate father doesn’t have the foresight to see the value gained by a little up front investment. Instead, his father is pressuring him to do something that TJ knows is very wrong. He will do it, though. He has a plan, and he promises his father he will come through by the end of the weekend. But if the plan veers off course, TJ will be ruined.

TJ and Mila had played a game for years. Flirting and arguing, even a kiss once she had turned eighteen. But both enter the weekend with a plan to bring their relationship to the next step. Their plans go down the drain, however, because they get caught up in their games. Things get complicated when TJ invites Barbie along as his date. Then Mila’s fake boyfriend Troy suddenly materializes, adding to the chaos. Many hurt feelings occur during the course of the weekend, but somehow TJ and Mila manage to get some alone time together. Mila has dreamed of a romantic evening leading to losing her innocence to TJ. TJ has other ideas, though. He likes danger. He likes dark and dirty. He wants to show her who he really is, but isn’t sure she will stick around once she knows him. Their story ends in a cliffhanger.

TJ and Mila’s story begins here with a lot of romp and flirty banter. Mila is light and breezy – like a morning bird, according to TJ. She is also lonely, living too much in her head. Her lifelong obsession has been to marry TJ. TJ comes across as fairly normal, but he has a dark side. There are hints of a painful past and a lonely soul. He is poetic when inspired, and despite his aversion to romance, he seems quite capable when he puts his mind to it. Their story ends here with many questions outstanding. *Spoilers* Why does the length of time in the contact vary from the four weeks TJ asks for? Why does he require so much of her? What is the extent of his father’s involvement in his plan? How does Barbie factor into everything? Who was the second person TJ called? What are TJ’s true intentions? What happened at the business dinner? Why does Cody treat Sally so dismissively? What is behind Mila’s family company’s difficulties? Is Cody really so oblivious?

TJ and Mila’s banter and explosive chemistry is highly entertaining, and their angsty relationship will keep you guessing what secrets TJ is hiding. Their story in nicely written. The plot is complex. There are light, laugh out loud moments, spicy scenes, and wickedly suspenseful twists. The cast of characters keeps things fluid and uncertain. The story is written in first person. The POV alternates between TJ and Mila. I rate this book four stars.

As for the Audio: it is very well-performed!

I received an advance copy of this book and audiobook and am voluntarily leaving a review.

Will four weeks be enough????

Mila has loved TJ walker ever since she has been a kid. TJ is her brother Cody's best friend When TJ asked her to be his fiance for four weeks. What should she do? Would she would be crazy to turn down??? She has been in love with him for years. This is her chance. Maybe it will turn into more. Then wtf who is this Barbie chick TJ showed up with? where does she fit in with the story?? You will need to read the book to find out. I loved this book and I'm starting the next book in the series.

Just a waste of time for a story that has no end, and really makes no sense regardless.