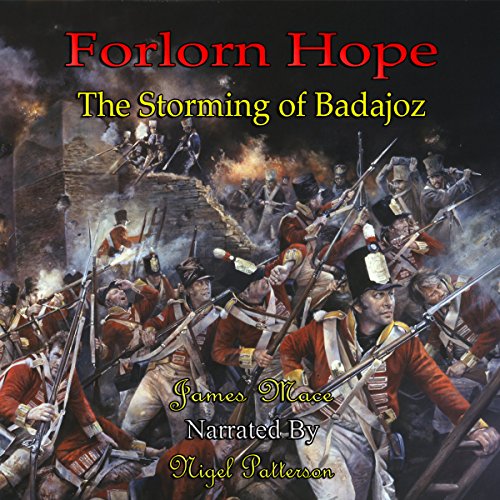 By: James Mace
Narrated by: Nigel Patterson
Try for $0.00

In the spring of 1812, the British army under Sir Arthur Wellesley, Earl of Wellington, has driven the French from Portugal. With Napoleon obsessed by the invasion of Russia, Wellington turns toward Spain. The way is barred by two fortresses, Ciudad Rodrigo and Badajoz. When Ciudad Rodrigo collapses after a short siege, Wellington prepares to break the fortress of Badajoz, the most formidable stronghold in Europe and commanded by the seasoned warrior, Baron Armand Philippon. Despite a shortage of engineers and equipment, Wellington must seize Badajoz if he is to have any chance of driving into Spain. When he learns that an army under Marshal Soult is en route to relieve Badajoz, Wellington risks being caught between Soult and Philippon and must execute the attack on Badajoz immediately. If he fails, the British will be trapped between two armies and lose everything for which they and their allies have fought for the past three years. Lieutenant James Webster is in mourning following the loss of his wife, and he volunteers to command the small group that will lead the assault. Second in command is Sergeant Thomas Davis; recently diagnosed with a fatal illness, he prefers a valiant death in battle. Breaches have been blown into the walls of the southern bastions, Trinidad and Santa Maria, and here Wellington will unleash the Fourth and Light Divisions, while launching diversionary assaults on the northern San Vincente bastion, as well as the Badajoz castle. Together with 100 volunteers, the Forlorn Hope, Webster and Davis will storm into the breach.

What listeners say about Forlorn Hope

The horrors of war

This book follows the fortune of a young Lieutenant under the command of Wellington at the battle of Badajoz. After learning of his wife's death in childbirth, he volunteers for a suicide mission in storming the breeches at Badajoz. The story expertly captures the horrors of war and the hopelessness of some who face certain death. The author does not shrink from detailing the glory and depravity of those who are placed in the hell of war. The narrator did a superb job in his voices. I have listened to Nigel Patterson before and consider him one of the finest English narrators reading today.

I received this audiobook free of charge by the author or narrator, and gladly offer my review.