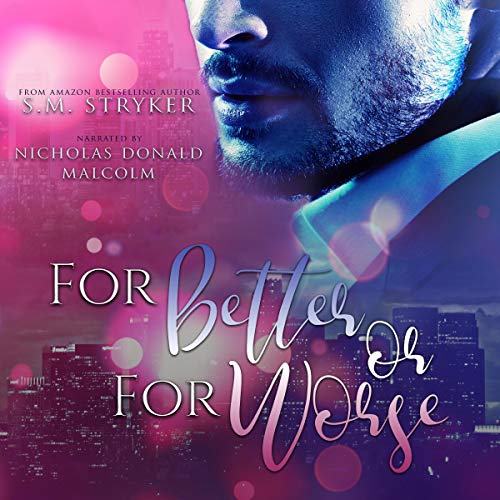 For Better or For Worse: Nash and Natasha's Story

By: SM Stryker
Narrated by: Nicholas Donald Malcolm
Try for $0.00

Natasha was only 16-years-old when she was stolen from us. Groomed to marry a man she doesn’t like, let alone love.

Alec Turner was my best friend and Natasha - Nat as we called her - his kid sister.

I had never told Alec the feelings I had for Nat. I was two years older than her, and Alec would have killed me and buried me in his backyard for even thinking, let alone mentioning, my attraction to her.

It’s been seven years since she was taken from me and Alec was just killed in Afghanistan, and the girl I fell in love with - the elegant, classy, prim and proper woman in the designer suit - well, she’s slinging handfuls of mud at his casket.

Little did she know, Louis, her betrothed, followed her, and he’ll stop at nothing to get her back. He needed her. No, he needed her birthright to take his place in the family.

My name is Connor Nash, and this is my story of lost loves and the second chances.

AUTHOR'S NOTE: For Better or For Worse is book three in the Then There Was You series. The books in this series, although each can be read as a stand-alone book, but each story, each character intertwine between books and continued to grow within each book. If you have picked up this book and have not read Whispers in the Wind and Then There Was You, I strongly suggest that you read them in order.

For a list of character in the series as well as other books, please visit SM Stryker’s website: www.smstryker.com

Whispers in the Wind - Book 1– Callie, Drayton, Maison, and Kai

Then There Was You - Book 2– Liam and Finn’s story

AUTHOR'S NOTE: Due to strong language, sexual content, and physical abuse, this book is not intended for readers under the age of 17 or have triggers with sexual abuse or physical abuse.

What listeners say about For Better or For Worse: Nash and Natasha's Story

I wasn’t sure what to expect with this story. It turned out to be action packed. Nash And Natalie go through hell and back. Is there love able to withstand this madness life has thrown?

So good I hated it to end

I love this series. There is so much emotion all through the stories. I know it as advertised as a standalone but I feel it is better if you have read/listened to the others as suggested by the author. The characters are somewhat carried into this story. I think this is like running side by side with the other stories but from different POV’s. Natasha is torn throughout her life….taken away from Alec and Connor, the mystery why she is committed to Louis, her relationship with Connor and his trying to protect her. This is so much about Connor’s life choices and how it affects them. Natasha, Connor and Alec’s lives are so connected that when things fall apart it is heartbreaking. When the author moves to the answers for Connor and Natasha’s story plus a little added to Alec’s story I was almost worn out. I do have to say I really am addicted to this author. Thank you for the Marco Polo game. It added a little laugh. Every book leaves me happy but sad to see it end. This is romance, mystery, second chance and so much more. I absolutely recommend this series. I think Nicholas Donald Malcolm did a fantastic job narrating the story. It made the listening so easy to follow and the characters so real. I asked for a free copy of the audio and this review is completely voluntary.

I asked to receive this free review Audible book and wrote this unbiased review. SM Stryker is a very talented author that immediately draws you into the the story. Having just listened to the first two stories this book seemed to take too much time repeating the events of the first two books. These events did directly affect Nash and Natasha's relationship, but I wanted more about this couple. If you didn't read the first two books, this information would have been very relevant. This story has action mystery, angst, a few surprises, love, and a landslide of events. Nash is a FBI agent that has seen too many horrors on this assignment and these have caused him to make a heart-wrenching decision. Natasha has loved Nash since she was a child. She has experienced so much heartache in her life. The author's character and plot development makes this story come to life.

The narrator does an amazing job of portraying the emotions and personalities of these characters. His performance is a stage production of this book. I recommend this Audible book.

I didn't like all the flashback scenes because while informative they are highly distracting going back and forth. Not a fan of flashbacks. Tell the backstories and go to present instead of making me dizzy. When we meet Nat she's cursing snd swinging fists, and darn if she isn't doing it at the end too. Smh. Loves violence and laying her hands on others. She's impulsive and over reacts frequently. This was dark with darker twists, and I do consider this human trafficking- selling someone as a child goes beyond arranged marriage especially if people are killed to make it happen. The narrator was good. I voluntarily listened to a free copy of this and am giving an honest review.

It took me a little while to get my head around the time jumps at first as wasn't expecting it but soon got into it and felt lost in Connor and Nat's world.

Connor infuriated me with what he did, feeling he was doing the right thing... Gahhh My heart was heavy at that thought... So many years lost...

But... My god did the story come together brilliantly in the end... I did wander at the beginning how Nat's betrothed was going to manifest ... A nice way of tying it all together in a perfect bow ..

Narration was spot in. A good narrator will always transform what's on paper to a superb play in the mind!

For Better or For Worse is a beautifully written love story and a fantastic addition to the Then There Was You series. Connor Nash and Natasha are captivating characters, multi-faceted with genuine depth. Their journey is emotionally charged, paved with obstacles, uncertainties, and heartache.

Nicholas Donald Malcolm did an incredible job with the narration, breathing life into the characters. I absolutely loved everything about this audiobook, and strongly recommend it.