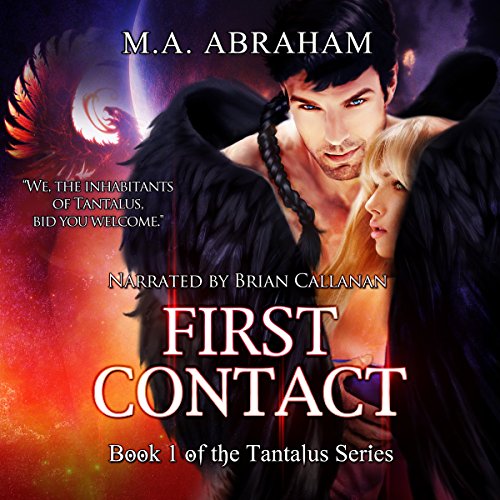 Twenty ships have left the gravitational field of the Earth with the intention of colonizing Mars. Each is independent of the other and set to become domed cities upon landing. The mission is simple: go forth to develop the new planet, make it an extension of our home. Well, it sounded simple.

No one expected life on Mars to be easy, they are pioneers and that is a type of life that comes with dangers. What they didn't expect was for the settings of one of the ships to be off enough to miss their landing, to miss the very planet they were meant to settle.

Even more astounding was to find another planet within a three-week travel period that lies in the shadow of the red planet. It is where they will land, where their ship will unfold to become a domed city. Where life is dangerous in a hostile land and they find unexpected help. The indigenous winged people of the planet don't live on the surface of the planet, they live in cities in the clouds, but they are willing to extend a welcoming hand to those who have come to their land, as well as teach them what they can to survive. Their relationship begins with three words.

Great Characters, great story. I was captivated and pulled in by the not only the story but the narration. Great job!

There is discord ahead

This series has me intrigued. It’s a fresh look at humans encountering alien life. These other “people” are intelligent, have a well ordered society and good values. Oh, and they have wings! One of them telepathically warns the humans traveling on a Colony ship that they are going to miss their intended destination- Mars. We learn there is a connection between the two species and I look forward to reading more about this development.
I enjoyed that the people who live on Tantalus are so welcoming to the newcomers. The humans bring old prejudices long though overcome. The people on Tantalus are not free from their own discord. What will happen as the two species attempt to share this world?
The book ends with a definite lead up to the next book.

I have listened to Brian read the series “The Adventures of Jason Lex” and he again puts forth an excellent narration here. He brings the correct amount of expression to the story, portrays males and females well, and brings out their personalities. I would happily listen to another story read by him.

I have not read/ listened to a book by this author before, but would gladly do so again.

First Contact, the first book in the Tantalus series is a sci-fi romance with a rich plot and captivating characters. The storyline is refreshing, takes a different approach to the introduction of humans to an alien society, advanced winged humanoids with good morals and values. M.A. Abraham is an exceptional sci-fi romance author, with the talent to build a sophisticated and advanced alien culture.

A colonizing human ship heading to Mars inadvertently veers off to the path towards an unknown planet, Tantalus. The two species will now have to learn to share a world. The question is, will old prejudices and discord allow for a peaceful co-existence?

The characters are well developed with depth to make them unique and interesting. The romance element of the story is very well written, tastefully-done, sensual, and engaging. The storyline and the characters are fascinating, and the worldbuilding is phenomenally done.

Brian Callahan's performance is utterly marvelous. He literally sucks you in and wholly absorbs you in the story. His inflections are perfectly timed, and with the ability to perform a wide range of tones, he is able to portray various characters and personalities. He is a genuine voice artist, and I absolutely relish his performances.

Overall, First Contact is a compelling story with wonderful characters, both violence and profanity are also limited. This was an enjoyable audiobook, and I highly recommend it.

A fantastic first in a part

This is book 1 in the series. It’s a Sci Fi story.
This is about ships leaving Earth trying to land on Mars.
Somehow the ship with Cara and her children is Mars . They don’t know what to do , where are they going to land . Cara picks up a signal (her psychic abilities have progressed hers and her children ) where there is another plant , not far from Mars. . When the earth people land they see others that look like earth people but they don’t life on the plant. They life in the clouds

This story has it all fantasy, $ex fantasy and imagination .

Brian Callanan was great as a narrator. He’s voice knew no bounds . He know how to do many characters

I loved the ebook and I love the audio. Brian Callanan was just fabulous at bringing M.A. Abraham characters to life. It was like I never read it before. Listening to First Contact was like I was brand new to the book.

Complex and very well developed world and characters. Intriguing storyline. Amazing narrator as well. I received a free review copy of this audiobook at my request and I have voluntarily left this review.

I bought this book as an ebook originally and lived the story as I read it then. I was so pleasantly surprised to discover that listening to it as an audiobook was like hearing the story for the first time only better!! The narrator brings the whole experience to a new level and brings the characters to life like my imagination never could. I was so sad when it ended. I can't wait for the next audiobook in this series!! Definitely would recommend!! I

The story by M.A.Abraham and performed by Brian Callanan is very captivating. The space exploration, and the suspense of unknown attacking within the ship are compounded by the appearance of the unknown, an alien race with beautiful men and women. Love scenes, of course materialize. The psychic abilities that are revealed add more to the great work. A good listen.

This was a very enjoyable book, well worth the time spent. Different than a lot of the first contact story’s you read, there is only one villain and everyone else wants to get along.there are moments that I was saying to myself “that’s pretty far fetched” but it’s not very often so I just moved on. I will be buying the next book and I don’t do that a lot, so yes I really liked the book. One thing to note, the book talks about sex quite a bit but it is pertinent to the story.
"I was given this free review copy audiobook at my request and have voluntarily left this review."

First Contact
Tantalus, Book 1
By: M.A. Abraham
Narrated by: Brian Callanan
This is an audible book I requested and the review is voluntary.
I really enjoyed this book! It has two stories going on at one time. One story is of the ship and occupants traveling to Mars, but they end up missing Mars and find a planet that is hidden somehow magically behind Mars. There is murders and intrigue going on during the trip on the ship. The other story is on the Planet Tantalus where the ship is heading to. There is just as much trouble is happening there. Great suspense, fantasy, science fiction, romance, mystery, well developed characters, and world building. Loved the plot development and how the two stories weave together.
The narrator was wonderful at building emotions, suspense, romance, and perfect for all kinds of voices. Enjoyed it as if I was watching a movie! Loved it! Can't wait to follow up with book 2!

I was given a free copy of this book and I'm leaving an honest and voluntary review.

This is a very unique and intriguing story of humanity's survival. The story itself is brilliant, a vast amount of depth and detailing. There is plenty of mystery and suspense woven in, the world building of the new planet is great, as are the alien characters, though its not without its own problems and intriguing. The main characters are very well suited, with their own personality.
The narration is spot on, a faultless performance.
I'd definitely recommend this book to anyone who like sifi

I loved this book. The story was hard to put down. The background to the alien race was very well written and I couldn't wait for ta human ship to land on their planet! There were a few tense and exciting scenes along with a couple of romantic storylines. Very addictive! Looking forward to the next book in the series.

First Contact is a foundation book for the other books in this series. It's the book that introduces readers to the Tantalarians and the key players in the human world. It also introduces us to the witch hunters, who are evil. The story moved along slowly, but the author was able to keep me interested because of all the intrigue. The narration was good, but I didn't think it enhanced the story in any way.

An interesting new series with lots of potential

I like the premise of us expanding to the stars and also that we find somewhere that we were not aware of. The Alien race (although we will be the aliens as we are going to another planet) were also really interesting. I like the hints of a much older expansion amongst the stars.
The two story lines coming together is a really great way of getting the background for future books and was really interesting.
I really enjoyed it.

This book was given to me free at my request and I provided this voluntary review.

This book is a good story with plenty of character development and progression. You feel connected and involved with the characters.
The story moves along well without any slow sections. Even has a few twists you don't expect.

The narration is immersive and well defined with each character being unique enough that you can always distinguish between them.

However in my opinion it has heavy romance/passion that is integral to the story. This neither detracts from the story nor the experience however it was a little more than I was expecting.

Overall a good story but for me it was more romance than science fiction. I am sure that the series will be as well developed and executed as the first book.