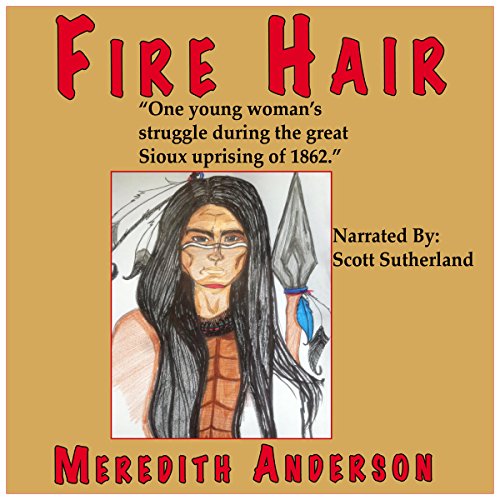 By: Meredith I. Anderson
Narrated by: Scott Sutherland
Try for $0.00

During the 1860's, there was more going on than the Civil War. This is a true story that has been fictionalized to improve entertainment value.

Hearing the hoofbeats of 20 horses entering the yard at the front of her house, Mattea pulled the lead rope, releasing the cow she was milking and ran into the house to find five Sioux braves wearing war paint sitting at her table, smoking her husband's tobacco from the humidor on the mantle.

Mattea repressed her anger and shock. 'Cinder Horse, why have you come to my home? And coming in without being invited.'

'Fire Hair' he responded, blowing out a large smoke ring as he stood beside the table, 'we are here to give you your life. A war has started and today, this land is going to be washed clean with the blood of the whites, and they will be swept away by the people.'

He prodded her with the tip of his war lance. 'Go! Go to your mother!'

In the days that followed, 677 unsuspecting settlers and 77 army troops were killed in western Minnesota during the Sioux uprising of 1862.

What listeners say about Fire Hair

If you are in the mood for a shorter book, but still want adventure, then this is the book for you. A fictional story based on a true story that depicts the life of a young woman caught in the chaos of the Sioux uprising.
I enjoyed listening to this book. My only draw back was the voice of the young Mattea in the first part of book was little irritating to me, but that is a personal preference.

The Indian Massacre of 1865

Would you consider the audio edition of Fire Hair to be better than the print version?

I enjoyed listening to this story on my commute. It made the time pass quickly as I got caught up in the drama of the story.

What does Scott Sutherland bring to the story that you wouldn’t experience if you just read the book?

He had a village of voices at his disposal making each character unique. I always knew who was speaking and identified with every character. I could visualize the story in my head like I was watching a movie.

It brought the plight of the native Indians to the forefront and showed how they were treated so poorly as the white man stole their land and way of life. Such a sad state of affairs in the history of America.

Indians on the war path

This book moved pretty fast, from peaceful Indians with the white man, to a full fledge war. It was sad when Mattea lost her husband of only 4 years when the Indians scalped him and their dear friend Moses, a former slave. Mattea was a very brave young woman living in an untamed land.