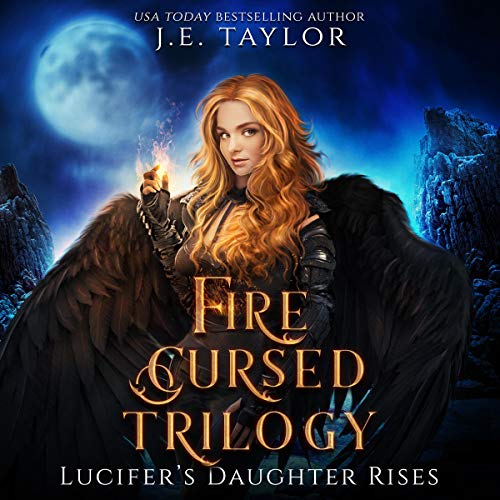 The Fire Cursed Trilogy includes Fire Cursed, Homecoming, and Judgement Day. It follows the story of Faith Kennedy after she discovers who her father is, revealed by her mother at her deathbed. Follow her adventures as she makes tough choices and faces challenges along the way.

Faith Kennedy’s quiet life off the grid ends when her mother dies of cancer. Before her mother succumbs to the disease, she tells Faith who her father is. The revelation terrifies Faith more than the thought of the state foster care system.

When Tom and Bridget Ryan step into the state home for girls, the course of Faith’s life changes yet again. With a new, less frightening future offered, Faith jumps at the chance to live in the light despite her newly found talents.

However, word that the devil’s daughter lives brings out dark supernatural entities, and each and every one of them either wants to control her or kill her.

Being supercharged doesn’t mean you can stop the inevitable.

Faith Kennedy has no control over her own powers, never mind what Tom Ryan bequeathed to her. She must learn to control her natural fire abilities while harnessing all her new supernatural gifts without harming those she cares about most.

When Faith partners with Kylee Paradox, an ancient bounty hunter, to close rifts she created across the globe, her worst fear comes to fruition. Half a world away, Alex Ryan goes missing.

Faith must hunt down the devil before he can claim Alex as his own. If she fails, she may have to kill her one true soulmate.

Nothing is easy. Especially when your only choice is between death and never existing at all.

Faith Kennedy faces the toughest challenge of her young life. She must hunt Lucifer and put him down at all costs, otherwise, the world will burn.

But if she succeeds, she may wipe herself - and everyone she loves - out of existence.

I am a little in-between when it comes to this book...The Narration was average, I would say, there was times were i felt like things were being said too fast not allowing an audience to be captured

then the story line was almost a knock off to Bianca scadoni --- The marked series--- which is my ultimate favorite paranormal series thus far.
the book is average or maybe to some it would be a little over average, its just i have read better in this line before...