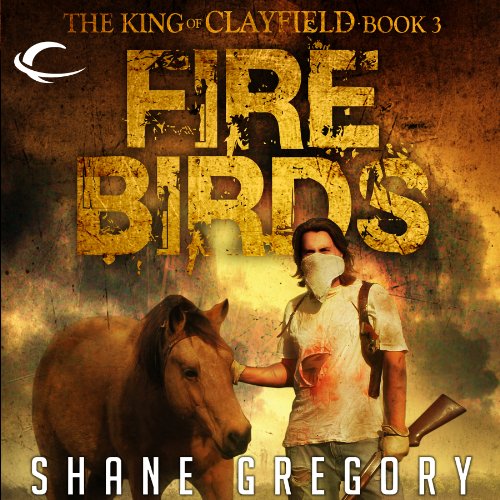 By: Shane Gregory
Narrated by: Scott Aiello
Try for $0.00

For weeks, the town’s museum director has fought the undead and has believed that he was Clayfield’s sole survivor. But when odd things begin to happen, it becomes clear that other healthy people are around. A friend shows up unexpectedly full of trouble and secrets, and they are not alone. Another group of survivors brings even more secrets and conflict. And then there’s Bruce, the new guy in Clayfield. Bruce likes the zombie apocalypse just fine. He gets to be the person he could not be before the outbreak. He is in Clayfield looking for fun, but his brand of fun could destroy the town. Enemies must tolerate each other out of necessity, and friendships are tested. One person in the group of survivors knows something that the others do not: The rumors are true; something bad is definitely coming to Clayfield, and there could be no way to stop it and nowhere to hide.

What listeners say about Fire Birds

This is part three in a series - you must read the first two before this one. I just like this author and characters. It's a little slower than the books I usually like but if you are a zombie lover this one is worth the credit. It's a very accurate portrayal of what you think would happen in small town USA after the zombie apocalypse. Solid story, characters, and narrator.

Hope there is more to come!

Would you listen to Fire Birds again? Why?

Have you listened to any of Scott Aiello’s other performances before? How does this one compare?

Don't want to give anything away, but when I heard the description of what was being used as a hood ornament on the Firebird I felt depressed the rest of the day.

This series ends on a good note. I really enjoyed this series. The plot was good, the characters were very realistic and relatable, and there was a good dose of humor. And even though there are some unique aspects to living in the zombie world portrayed, it followed a general zombie novel format. I mean that in a good way.

This series is one of my guilty pleasures. The narrator brings the world to life with his folksy swagger that is not overdone which greatly adds to the Kentucky small town vibe.

If you like the TV series the walking dead you'll love these three books. Nice twists and turns. Thumbs up!

threw me for an emotional loop

The twist tipped me off my seat and was never able to help me emotionally regain. good ending to the story but felt rushed. all in all good series just rushed.

I couldn't believe what I was reading!

Seriously? The story went like that? How could you do that Shane! Again?!
I can hardly say anything about the story without giving anything away. So I wont. I'll just yell at the author again. I'm knocking off stars for you, Shane! Don't do that again! I don't like stories turning out like that! Waited all this time for this and that to happen but you make that and this happen...man...

Still, gotta keep following this awkward, weird and crazy story, but you pull that stunt one more time and I'll...