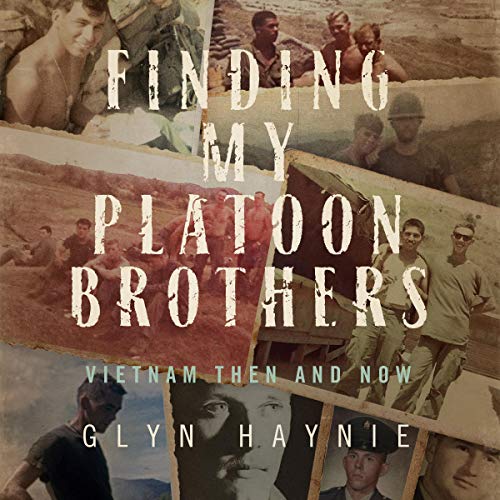 Finding My Platoon Brothers: Vietnam Then and Now

By: Glyn Haynie
Narrated by: Chris Monteiro
Try for $0.00

Glyn Haynie carries the names of 13 brothers forever engraved on his heart. They are the names of brothers killed in combat during the War in Vietnam. The bonds formed in battle are unique and not understood by anyone who has not served in the military. The men in their foxholes do not fight for lofty ideals or principles; they fight to protect the man standing on either side of them. For these Vietnam veterans, there is an additional element included within this bond of brotherhood. That is the disrespect and abuse these soldiers received when they returned from Vietnam.

This newest audiobook by author Glyn Haynie, Finding My Platoon Brothers, Vietnam Then and Now, describes his efforts to find and reconnect with his brothers of First Platoon. These men, with whom he served during the War in Vietnam, are a real part of his family.

Join the family reunion as these veterans get together and share their experiences, rekindle past friendships, and reforge their bonds of brotherhood. Travel back to Vietnam with the author as he visits old battlefields and former Fire Support Bases and reconnects with, and comes to peace with, the memories of brothers who died in battle.

This incredible story of honor, healing, and redemption will touch the hearts of listeners in a great many ways. This story is a fantastic narrative that all Americans should listen to.

What listeners say about Finding My Platoon Brothers: Vietnam Then and Now

The bonds formed in war cannot ever be broken. That's the message of this most intriguing book. Once a platoon brother, always a platoon brother, no matter how many years pass. And in reunion and a trip back to Vietnam, the memories shared amongst the platoon brothers are still as raw as they were decades before. Chris Monteiro's narration is superb. It's always so exciting to find a narrator you've never listened to before, and thoroughly enjoy. His pacing and ability is on par with the most seasoned. This is overall a most excellent read!!

I was given a free copy of this audiobook at my request and have voluntarily left this review.

The Bonds of War

The bonds formed when people go through harrowing events are often lifelong. This book lays that out in great detail. What I liked most about it was the bonds were so tight amongst these guys that having not been in touch with each other for 20 plus years that once they were reunited it was as they hadn't missed a day. Although the circumstances they endured together were terrible they subsequently formed friendships that will last forever.