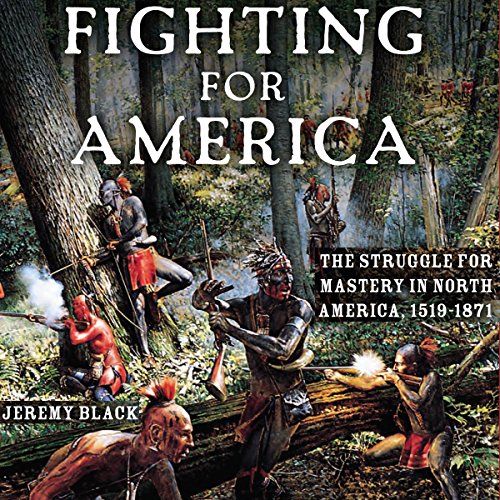 Prize-winning author Jeremy Black traces the competition for control of North America from the landing of Spanish troops under Hernán Cortés in modern Mexico in 1519 to 1871 when, with the Treaty of Washington and the withdrawal of most British garrisons, Britain accepted American mastery in North America. In this wide-ranging narrative, Black makes clear that the process by which America gained supremacy was far from inevitable. The story Black tells is one of conflict, diplomacy, geopolitics, and politics. The eventual result was the creation of a United States of America that stretched from Atlantic to Pacific and dominated North America. The gradual withdrawal of France and Spain, the British accommodation to the expanding US reality, the impact of the American Civil War, and the subjugation of Native peoples, are all carefully drawn out. Black emphasizes contingency not Manifest Destiny, and reconceptualizes American exceptionalism to take note of the pressures and impact of international competition.

"American (and Canadian) readers will learn a lot of new things and be led into new ways of viewing old ones. An important contribution." (Walter Nugent, author of Into the West: The Story of Its People)
"This fascinating book describes the 300-plus year history of North America, from the landing of the first Spanish explorers until 1871." ( Military Heritage)

This is a worthwhile listen... with qualifications

I can't see why anyone would pillory this book. It is well-written, but you have to approach it with some understanding.

First, I had to slow the speed down on this one. It listens like a speed-through, as if I was cramming for a history exam. If it is slowed down to .5, it is much more in the realm of a narration, and you can take in what is being said rather than focus on each word to make sure you get it.

Second, the book is written (I assume, since I don't have the book) more as a doctoral dissertation than a popular text. It was published by a university press, which by definition means it is going have an academic tone. This is by comparison with the work of an author like David McCullogh or David Hackett Fischer, who bring the personal experience of participants into the narrative. Their books are more toward an account of what happened and less of an analysis, although they do some of that as well.

Th advantage of the academic approach is that an author is able to deliver a lot more perspective as a more distant view of the history. For example, in a very concise segment of the chapter on 1775-1783, Black explains a view of the revolution from Europe, which was constantly in turmoil at that time. Why didn't Britain ally with other European countries to distract France from aiding the North American revolutionaries? This approach to the fight for North American is used throughout, so I learned many, many things that were not known to me previously.

Admittedly, I do love history, so I enjoy this approach. I rarely read fiction at all. So, someone who reads (or listens to) only an occasional historical narrative should probably stay away from this.

I did not know you could use the word geopolitical so many time in every sentence. This is not a book I determined I wanted to read after listening for about an hour!! Time to do my library a favor and send this book to the great cyber garbage truck in the sky!!!!!!!!!!!!

What made the experience of listening to Fighting for America the most enjoyable?

I haven't completely finished this but I found the subject very interesting.

I like the subject; I haven't found very much on early immigrants in North America.

What does Jeffrey Whittle bring to the story that you wouldn’t experience if you just read the book?

The performance is fine; it didn't make me want to stop listening.

I would have liked to; I haven't finished it yet.

Looking forward to listening till the end

not a military history as the title implies. a dull political and social history written in the language of a sociologist author struggles to make tenuous connections between past events and modernity that only detract from the story. the narrator assaults the ear like a jackhammer I hated this book