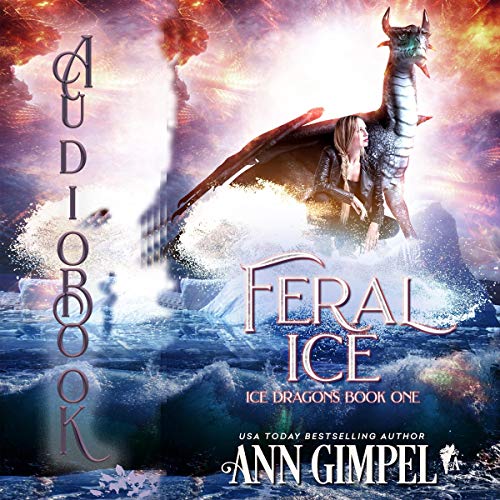 Scientists don’t believe in dragons. Dragons never think much about humans at all. Maybe it’s time for their worlds to collide amidst the dangerous beauty of Antarctica.

Doctor and biochemist Erin signed up for six months aboard an Antarctic research ship to escape her stifling surgery practice. Jerked from her cozy cabin, she’s dumped in an ice cave by men who assume she’s dead.

Konstantin and Katya, twins and dragon shifters, have lived miles beneath the polar ice cap for hundreds of years. Other dragons left, but they stuck it out. When several humans - all but two of them dead - end up not far from their lair, the opportunity is too good to pass up.

If the lore is to be believed, humans can become dragon shifters. Delighted by a simple solution to their enforced isolation, the dragons lure the humans to their home. Surely, they’ll be thrilled by the prospect of becoming magical.

Too bad no one shared the script with the humans. Science be damned, they’re horror-struck in the face of fire-breathing dragons. All they want is to escape, but home is thousands of miles away.

What listeners say about Feral Ice

This author and narrator were both new to me.

I found the story interesting and not very predictable. I've only read one other dragon-shifter author, so I didn't know what to expect. I could easily envision the world Ann Gimpel was creating. I found the pace of the narrator, Gregory Salinas, a little slow to my liking but eventually I became accustomed to it.

I knew that this was the first book in a series of three. I don't know why other reviewers stated that this could be read as a standalone. The book ended with a bit of a cliff-hanger, leaving me disappointed. That being said I am looking forward to the next in the series to see what happens next.

Note: I received this book in exchange for my review.

What a fantastic audio dragon love

Book 1 in the series. Wow what a start to the series. Ann Gimpel the author knows how to write a story that will grab you attention and you won’t want to put it down till the last word.
This story takes place in Antarctica. The words describing the land and the dragons are awesome.
This story has the last 2 dragon shifters in the world hero is Konstantin and his twin sister Katya.
Both Konstantin and Katya are getting frustrated that humans are getting closer to their home . And they don’t want to be the last of their kind , Konstantin has an idea and he’s wondering if it will work . Also Katya admins to Konstantin that she can’t see the future, it’s cloudy and even worse her dragon has deserted her . Konstantin is wondering if he can bring her dragon back to her with an idea he has . Konstantin idea is to mate with humans , mix the genes to make more dragon shifters.
The humans in Antarctica are Dr. Erin Ryan, and Johan Petris. They are the only ones left after some Russians murdered their mates , who they use to work with. Both humans think there is no way they are going to die either when they are frozen or by injuries. That’s when both our Dragons Konstantin and Katya decide to save them but unseen. There is another threat waiting for our four and they will need to join forces to defeat the creatures . Grab it and see are they mates and new dragons shifters are born .

Gregory Salinas performance was out of this world . His voice brings the story to life , his tone for the characters and emotions are great . His voice is steady , strong and smooth

I guarantee those who love stories of dragon shifters finding their fated mates and saving the world will love the Ice Dragon series. Ms. Gimpel has the unique ability to write dialogue and situations that are immensely entertaining…case in point is the interaction between Erin and Konstantin depicted in this first book…as we have the main story of an alpha dragon and a modern-day woman who is stubborn, opinionated, and stand-offish. The narration by Gregory Salinas is very good as I had no problems differentiating the various characters in his narration. I absolutely can’t wait to listen to the next book in this entrancing series!!! I received this audiobook at my request and I provided this voluntary review.

loved it! storyline was well-written and characters were well-developed. narration was great and was easy to listen to.