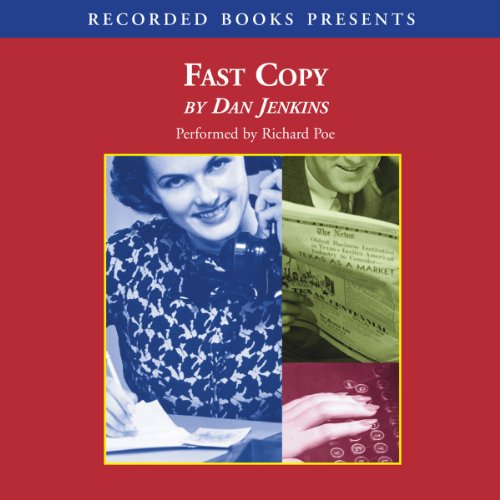 By: Dan Jenkins
Narrated by: Richard Poe
Free with a 30-day trial

In 1935 Betsy Throckmorton’s father lures her from a New York job with Time magazine back to Claybelle, Texas, with the promise that she can be the editor of his Claybelle Standard-Times. Betsy brings along her husband, Ted Winton, an easterner and Yale graduate to whom she is constantly explaining Texas. Ted will run Ben Throckmorton’s radio station, KVAT, where Booty and Them Others sing in rivalry with the better known WBAP Light Crust Doughboys.

In Texas, it’s the middle of the Depression and the Drought. And Prohibition is barely over, liquor still a controversy. Every city has its hobo camp, and Claybelle has the Star of Hope Mission. But it is also the time of new oil money, high living, infidelity, and tangled love triangles. Betsy and Ted chain-smoke and drink often and long, they wouldn’t miss a Paschal High School or TCU football game, they party at the Casino on Jacksboro Highway, and dine at Claybelle’s Shadylawn Country Club.

Betsy is a serious journalist though, and she sets out to change the paper, clashing with the managing editor when she claims international not state news belongs on page one. She clashes with the columnists when she tries to sharpen their leads.

The Texas Murder Machine becomes her big story, when she suspects that Texas Rangers may be killing innocent young men to collect rewards offered by the Texas Bankers Association. Betsy’s journalistic determination leads to a personal tragedy that changes her life forever - and makes her a determined, relentless newswoman.

What listeners say about Fast Copy