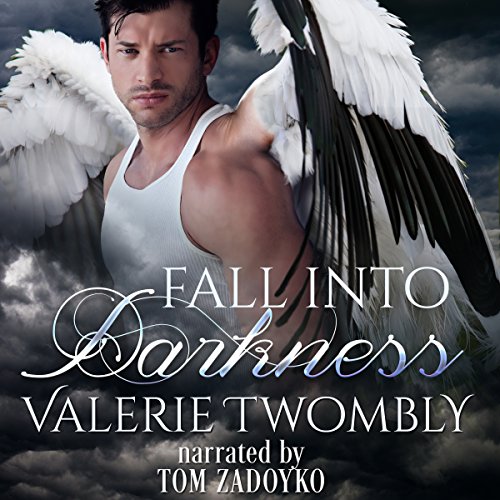 By: Valerie Twombly
Narrated by: Tom Zadoyko
Try for $0.00

An angel cast out of heaven.

Warrior angel Eli lives by his own rules and bows to no one, even as he is summoned before the Tribunal Seven. But when the powerful council deem the hunter has lost his humanity, they sentence him to earth with one mission - learn compassion or be condemned to Hell.

A woman trapped in a lonely hell.

Ashley is a freak. With one glance into a person's eyes, she foresees their death - so she tries not to look. She's even willing to move to the wilds of Alaska to get away from civilization. But when an attack brings a handsome stranger to her rescue, she can't help but be drawn to his steel-blue gaze...no matter what she'll see there. But the scars on his back...he didn't get those protecting her. Who, or what, is he?

Can they save each other?

Eli is drawn by the darkness that has consumed too many of his fellow hunters, but Ashley tempts him even more. Just one problem - by giving into their desire, they begin the mating process. He must save her from whoever is dooming angels to Hell, long enough for her to come into her own - then let her go. Ashley longs for Eli's touch. In his arms, she is stronger than anyone knows. Can her love convince him that together, they have a chance against the evil plaguing them all?

What listeners say about Fall into Darkness

Great book. but it ends in a cliff hanger, and no book 2 in site. I hate that.

Tom did a fine job at reading this me.


WARNING: If you don't like cliff hangers this book is not for you. As you will have to read book two in order to find out what happens!


I was voluntarily provided this free review copy audiobook by the author, narrator, or publisher.

Super sexy fallen Angel story, coupled with a great narrator, and you've got THIS story! Now, I need to know what happens next! You've got a tiny bit of angst (y'all know I can only stand so much), a huge hit of scorch, and a great storyline that's kept me eyeball-reading Twombly's stories, after personally switching my reading preference to audio. You see, I've read this book as an ebook, and have been happy to read all of her books, so far. But, when I found out that she'd decided to go to Audio??? I immediately one-clicked. Just as I will do with the rest, as they come out! The narrator did a great job with voices, and am looking forward to more from him as well.

I truly enjoyed the story. I didn’t expect the book to turn out that way. The narrator made it a pleasure to listen to

Absolutely!! It's a wonderfully written story that grabs you and doesn't let go until the end!!

Can't pinpoint just one, I loved them all.

I really enjoyed Tom's various voices for all the characters, including accents! He did a really awesome job telling this story! I will be looking for his narrations of other books...he does a wonderful job.

This is a great story which pulls you in from the first word spoken and doesn't let go until the last!! My first thought at the beginning of this story was that it is reminiscent of The Prophecy. I would suggest this to all my friends!

A well written story about an fallen angel and the woman who steals his heart. I loved this series!

This was a well written romance. There are angels, fallen angels plus a human that's just something a bit more. The want and need between the main characters feels so real. Each character trying to tame their need only intensifies the reality of these characters. \

I listened to this book in one sitting. I NEEDED to know what happened. The only downfall was that I wanted more at the end. I can't wait to listen to the next book when it is released!

Angels who at one pint turn to evil, killing humans and the angels that hunt them down. Eli hunts the turned angels down but is beginning to find it harder to stay away from the darker inclinations, until he is taught a lesson and meets his mate, Ashley. Ashley has no idea who she truly is...her life has been difficult and she has hidden herself away.. She and Eli learn their truths and Ashly makes a sacrifice for him...which may be her life....to be continued.
Full of twists and action...not my favorite type paranormal and yet anxious for the next book to see where it leaves.
Narrator was good and kept me interested in the story...this book isn’t for everyone..so can’t say it would be worth a credit..depends on what you like in paranormal

Wow, what a fun listen! When fallen angel Eli is sent back to Earth to find his humanity, he has no idea where to start. Humans have made such a mess of things than he has little compassion for them. That is, until he finds and rescues Ashley. Realizing that she is his mate, Eli will do anything to protect her from the evil forces that are wreaking havoc. But who will protect Eli? Ashley is much more than she knows but will it be enough to save them?

Fall Into Darkness was a sexy paranormal romance that I really enjoyed. It had a great story with a host of interesting characters that held my attention. I sympathized with Ashley's lonely existence and couldn't imagine what it would be like to see death in everyone's eyes. Tom Zadoyko did an excellent job with the narration and the characters were easily distinguishable. My only criticism would be the cliffhanger - I hate those! Despite that, Fall Into Darkness: Eternally Mated, Book 1 was a great listening experience and I would recommend it.

What does it take to make an Angel fall?

I loved this story, I'm already itching to get my hands on the second book!

Poor Ashley! Can you imagine seeing the death of everyone who's eyes you meet, it would be awful. I couldn't help but feel for her, and then for other characters as they story progressed. The characters shown in this book are fascinating and relate-able, and the story, my goodness, just fabulous!

I spent the whole time I was listening to it on the edge of my seat desperate for what was going to happen next.

Tom's narration is well done, good character voices and a delivery that help me become absorbed in the story.

I received this book free from the narrator/publisher/author in exchange for an honest review.

I really enjoyed this super sexy paranormal romance. Interesting story and well developed characters brought together with fantastic narration. Only complaint is that cliffhanger. It's hard to review a story that's not complete but I do look forward to book 2 so I do recommend this audio book!