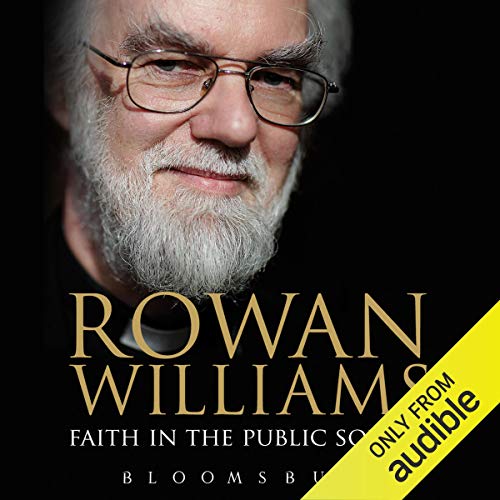 Faith in the Public Square

By: Rowan Williams
Narrated by: David George
Try for $0.00

Archbishop Rowan Williams is the most gifted Anglican priest of his generation. His views are consistent and orthodox and yet he has been consistently misunderstood - especially in relation to his views on contemporary society, public morality, and the common good.

In this, the final published work of his Archepiscopate, Dr Williams has assembled a series of chapters on matters of immediate public concern and the relationship of Christianity to these issues. Among his topics are "Has Secularism Failed?: Europe, Faith and Culture", "Human Rights and Religious Faith", "Changing the Myths We Live By", "Housekeeping: The Economic Challenge", "The Gifts Reserved for Age: Perceptions of the Elderly", and "Analysing Atheism".

What listeners say about Faith in the Public Square

Some authors are more aural in their writing style. They write in a method where reading it out loud is the best method. Neil Gaiman, Eugene Peterson, Rob Bell all are authors that I immediately go to the audiobook first. And then maybe later re-read their books in a print format.

Rowan Williams I have decided is the opposite. I do like his writing, but he writes in a style that has lots of asides and subtle nuance that makes audiobooks difficult. I am always assuming that there is a footnote or some other feature from the print book that would help make sense of the context that is unavailable to the audiobook listener. (Although some of these essays were originally lectures and those are much easier to hear and understand.) And that is unfortunate for me, both because for some reason almost all of Williams books are cheaper on audiobook than in print and because I tend to listen to more audiobooks these days.

Faith in the Public Square was published just before Rowan Williams left office as Archbishop of Canterbury. As the most visible public voice in the church in the UK, he has a unique place to discuss how faith should work in the public realm. As a brilliant academic, he has the philosophical chops to actually discuss the religious and philosophical grounding of that interaction. And after 10 years of serving in the position with a number of public controversies, he has the background on the actual areas where problems occur.

Faith in the Public Square is made up of essays, sometimes talks, that were meant to address specific issues. Those specific issues are occasionally grounded in UK specific current event or legal issues or longer history. But even when I knew I wasn’t getting the full nuance of the discussion, I was mostly able to follow along with the argument.

The essays are groups into seven sections, secularism, pluralism and the law, the environment, economics, justice, religious diversity and ‘rediscovering religion’. Not everything has aged particularly well. He has a discussion on India as an example of successful religious pluralism, but in the six years since publication, India has moved almost uniformly in a direction against religious pluralism. But for the most part, I think getting the ideas of someone that is outside of our US context for a discussion of religion and the public life helps to break down some of the particular cultural issues that are focused on religious and political issues in the United States.

There is a fascinating discussion about human rights and how they have been previously grounded in religious understanding but are increasingly grounded in legal code divorced from religious or even philosophical moorings. Again, I think that because Williams was writing as the Archbishop of Canterbury there is a recognition of how legal and religious interactions matter, in slightly different ways than they matter in the US. An earlier essay discussed the problems of how we defined humanity (particularly the problems of grounding it in capacity.)

The overly simplistic summary of his argument around human rights is that they should be grounded in recognition of all people’s common humanity and not grounded in a shifting legal recognition of a particular list of rights. The list will always be inadequate to fully define another person’s humanity. But framing the legal recognition of wrongs against a person, or even better, against an identified group of people, as a lack of recognition of their full humanity better allows the flexibility of ways that minority groups are kept from being full members of society. His concern is that when rights are a list and the society is individualistic, then the legal weight is not on recognition of full humanity of all people, but on the exceptions.

For instance, in discussing the legal right to die for elderly or disabled individuals, Williams is concerned that the legal focus would shift from protection of the weakness of those that are sick, dying or aged against abuse, to the minority of people that seek out control of their deaths. Would the legal focus on the individual seeking death, necessarily shift the focus from prevention of abuse of a group enabling the rights of the individual, which may result in additional abuse of that group?

The sections on pluralism, economics and religious diversity were the strongest. The section on justice was mixed, with some excellent thoughts on what justice entails, but also some weaknesses when it comes to specific suggestions. The section on the environment was fairly uninspiring, but not bad. The first section on secularism, although with flashes of brilliance was the hardest to translate into audiobook because it was the densest writing. I would like to read that section again in print.

For the most part, Williams and his brilliance is on full display. In wide ranging essays like in this book many theologians stray outside of their areas of expertise into areas where they have legitimate theological or ethical concerns, but not a lot of specific background. Economics is one of the areas that many theologians like to comment on, because economics is theologically important. But it is also an area with its own academic content and economists almost always complain about the lack of actual economic understanding by theologians.

Williams tends to do a good job at looking at places where theology and ethics have roles within a field, say criminal justice reform or ecology or senior care, without straying into the academic discussions of the area itself. When he occasionally steps over the line into specific issues where I have some knowledge, he can show some weakness. But most of the time Williams is an example of how to bring the weight of his theological office and background into areas of secular vocation or politics without losing track of the point of the Christian reason for his comments.

I am not sure this is the best book I have read on the interaction of politics and faith. For one thing, it is a book of essays that was compiled, not a specific book on how faith and the public square interact. But it was worth looking at how someone that has a public voice can speak about their Christian faith into a secular culture and political world even if you may not always agree with where he ends up.

Long, but still so relevant

Rowan Williams sets out a strong argument for how faith can tackle inequality in society. It is long, and quite dry and intellectual in places for me, but his talk on empowering the voiceless is inspiring. It is read well too. I was privileged to meet him some years ago as a city Councilor, and he doesn't fail to challenge 6 years on.

the narration lets it down

I could tell this was well written, in the brief listen I could stand .
I wish with such a prominent UK figure as Rowan they had not chosen an american to narrate .
I thought the narration seemed not to flow with the content as it should .
I am going to return this one

I struggled with this book. It was really poorly read which made the big concepts hard to follow at times. But it was worth the effort though.