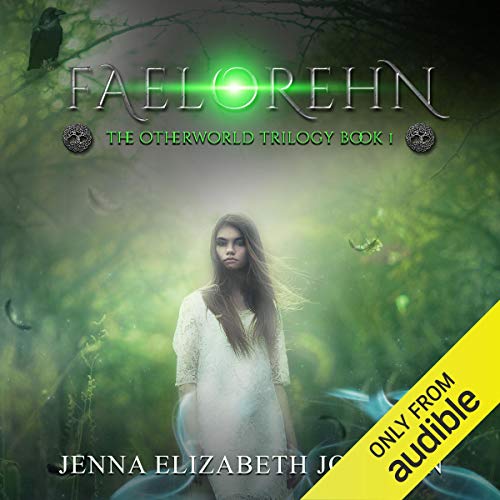 By: Jenna Elizabeth Johnson
Narrated by: Christine Papania
Try for $0.00

I never heard him come after me and even as I climbed the slope and stumbled onto our shaded back lawn, I didn't look back. It was like the day the gnomes chased me all over again, but this time I was not escaping some horrible little creatures, I was fleeing from an incredibly good-looking guy who could very well understand me completely. I was either saving myself from that serial killer I always imagined lived down in the swamp, or I had finally gone over the deep end....

Meghan Elam has been strange her entire life: Her eyes have this odd habit of changing color and she sees and hears things no one else does. When the visions and voices in her head start to get worse, she is convinced that her parents will want to drag her off to another psychiatrist. That is, until the mysterious Cade MacRoich shows up out of nowhere with an explanation of his own. Cade brings her news of another realm where goblins and gnomes are the norm, a place where whispering spirits exist in the very earth, and a world where Meghan just might find the answers she has always sought.

What listeners say about Faelorehn

An invitation to travel through the Dolmarehn

I discovered Faelorehn during an online reader event and having never read any of Jenna Elizabeth Johnson's work before I didn't know what to expect. I figured it didn't hurt to give it a try, after all the Kindle version was free on a sale at the time. I'm so grateful I participated because one never knows the treasures they'll find. I ended up getting the Audible audio book version as well.

The story is told in first person, which always takes a bit for me to get into as we are taken into the story from one perspective and without the luxury of others' thoughts. This is no reflection on the story just my reading habits.

Right away we're taken into a dream or is it a memory of teenage Meghan Elam, a mysterious adventure that is just a piece in the puzzle of her life. She feels very different, always has, from the way her eyes change color to odd visions and the uncanny way she hears trees sometimes...

As her day starts we're introduced to her family, including her mom, dad, and five younger brothers...including her special connection with Aiden who has Autism. Then we meet her friends...who she kinda annoyingly analyzes a bit as she explains them...but that's teenagers. Once we arrived at school I found myself kinda relating to her friend Robin, as I never tolerated bullying of anyone, let alone myself or friends and was hoping Meghan would stand up for herself. Well she does, it does just take longer than it should.

Before long she starts encountering all sorts of startling things; not least of all an over-sized Raven with red eyes who seems to be watching her, freaky gnomes in the swamp, and a white wolfhound who lures her into the night. Cue Cumorrig and a really tall and immensely strong stranger and yikes, what on Earth is going on.

Cade MacRoich says he has some answers for her, but she's not sure she wants to ask those questions... once she does it seems there's no turning back nor away. Then again, with stray Faelah creeping into her neighborhood she couldn't avoid them nor this Otherworld Hunter anyway. Of course, he talks like he's from an age gone by and his smile would melt butter on a frozen winter day....what were we talking about....oh but he keeps disappearing and seems to be keeping secrets from her...maybe some deadly secrets.

I'm sorry, am I annoyingly just giving you faint hints at the story without actually explaining it to you....good because I highly recommend you read this series yourself and be prepared to get caught up in the adventure and follow Meghan into the Dolmarehn to find out what happens!

I did. I started out with the Kindle version... which I stayed up far too late and left many tasks undone to finish reading. Then I moved to the Audible audio book version (audio my preferred method) and acquired the rest of the stories available. I took a road maybe a little less traveled and read Faelorehn then Dolmarehn which are both told from Meghan's point of view (Books 1 & 2). Then I couldn't resist and read/listened to Ghalien then Ehriad (Books 4 & 5) which are told from Cade's point of view...some of the events from the first two books from his perspective plus new adventures. Then I read Luathara, which is actually Book 3.

Be forewarned, though, it seems to start off slow... or rather starts off intriguing, gets a bit slow and gives just glimpses into adventure before taking off... this is just first person storytelling...we get the events as they happen and many of the thoughts in between.... and then it ends all too quickly it seems like just after we're getting to the good stuff....but don't worry you can snatch the sequel right away like I did.

The narrator, Christine Papania, does a good job, do not let the preview/sample deter you. It did hinder me for a while, seemingly almost a little monotone and different. I am so glad I bought it and gave it a chance, it was well worth it. The main narration/character do take a little getting used to, however she does voices for each character... an essential key ingredient to a great audio book. And her reading for Cade is pretty cool, they should have totally used that for the preview! She also reads Books 2 & 3, so sticking with the same narrator is nice as well.

I recommend all of these books. I own the Kindle and Audible versions of each and will be rereading/relistening to them again. This series will probably join my annual reread shelf of Tolkien, MacDonald, McKinley, Fenech, and more.

The story would be better if it wasn't so heavy handed with the teen mooning. My teen daughters were bored with it. The speech affectations of the narrator are irritating. She can say the T sound clearly but omits it in the middle of words like "impor - ant" for no discernible purpose. The ending is obviously made to lead into the next episode, but it is rather a thud.

One of my favorite fantasies

What made the experience of listening to Faelorehn the most enjoyable?

I loved hearing this book for the first time. I was already a fan.

Very drawn out, Lots of angst

The narrator was very good. She nailed the over anxious and over dramatic depressing teenager. The story however was depressing and had lots of anxiety. The poor girl was always down. Nothing good ever really happened to her. When some small thing did happen, there was always something happening to bring her back down. Then her anxiety hit the roof.

The author also took A LOT of time to get to the point, as if building to something spectacular, Then, when the moment came, nothing, or the hero would say, "oh, I can't tell you". Ugh! It was so frustrating! Not a good read/listen.

A better narrator might have kept this disaster from imploding so early. Christine Papania should stick to American accents. Her attempt at Irish (?) is truly dreadful. Unfortunately the male lead does not appear in the first five minutes so the sample does not reveal how dreadful the accents get once he appears. The silver lining is Audible still has a return policy!

A Fairy Tale for the skeptics

This book started out slow, but picked up after setting the stage in more detail than was needed. Finally you learn what the title means but not who Megan is. Then she makes a decision with potentially dire consequences. The first book in the trilogy leaves you hanging...so what comes next?

This was a surprising delight of Celtic mythology and story telling. The lilting voice of the reader adds a delicious gooey caramel coating that enhances the experience.

This reader thoroughly enjoyed emerging herself in the world Ms. Johnson has created. And onto the next...

although the story was decent, I thought there was a lot of building, only to be left hanging with no real ending. The narrator should be sued by the author for destroying the listeners ability to focus and enjoy the actual story line. she spoke in the same monotonous voice with the inflection of every sentence sounding EXACTLY the same. I found myself daydreaming and then suddenly realizing I had missed huge chunks of the story and had no idea what was happening, forcing me to rewind and struggle to pay better attention. if I could have rated the performance with 0 stars that still would have been more than it deserved. I will be very careful with future purchases not to buy anything read by Christine Papania. I want my money back. =[

So much unrealized potential...

Narrator terrible. She read every sentence like it ended with a question mark. Made main character sound even more desperate and pathetic than the poor writing made her out to be.