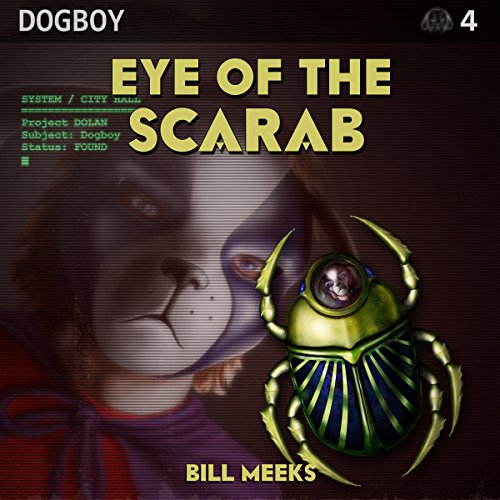 Eye of the Scarab

By: Bill Meeks
Narrated by: Nathan Beatty
Try for $0.00

It's the end of the world as he knows it. Colta City is a timeless old town, but time is catching up to it. Old friends and old enemies close in around Bronson Black, and an impossible choice hangs over him. As the modern world bleeds through, Dogboy considers the past. His decision could spell the end of his crime-fighting career! But maybe that's a good thing.

When the Colta City Shadows (including girl reporter Cindy McNeil) wake up in an underground arena, they face off against a group of extraordinary teens. Can the Shadows iterate through the Cycles, or will they become brainwashed soldiers in Mayor Lane's superpowered army?

What listeners say about Eye of the Scarab

Eye of the scarab

Another great DogBoy story. The action continues from the previous books in the series. Fast pacing, will Bronson and Cindy make up? Will Cindy tell Bronson the truth. Will Bronson and the others be able to stop the a Mayor . I am enjoying Dogboy.

Eye of the Scarab

I found this book,number 4 in the series,to be ok.It's kind of 'out there' for me.Dogboy is a fourteen year old superhero.He saves people and the city police don't seem to like that.He has a girlfriend and a fan base.Bill Meeks does a fine job with narration"I was provided this audiobook at no charge by the author, publisher and/or narrator in exchange for an unbiased review via AudiobookBlast or MalarHouse dot com"

This was my first introduction to the world of Dogboy. It was an interesting mashup of superhero and children's story. Dogboy is a 10 year old superhero in a Gotham-like dark and dangerous city full of double-faced politicians and dangerous or corrupt grownups. Initially, I thought this was a children's story due to the pre-teen age of the protagonists and the relative innocence of a superhero called "Dogboy", but the darkness and overall themes of the book make this a bit more of a YA-age bracket than middle grades. The themes for betrayal and solidarity and trust are universal, however. I liked that there was a lot of "grey" to the good guys, especially Cindy's actions - though it made me feel sorry for Bronson since she might end up being a villain. There are some violent and disgusting scenes, but I loved that the superpowers were simle and straightforward. The author did a great job telling a tale that doesn't rely on mega-powers, fight scenes, and elaborate gadgets.

I admit that I kept envisioning this book as a graphic novel or comic as I read along. I think it would have a wide age appeal: middle grade to adult.

I received a copy of this audiobook at no cost from the author via Audiobook Blast Facebook in exchange for an honest review. Thank you!

Now I want a Dogboy mask!

Note: Even though this is Book 4 in the series, it works mostly fine as a stand alone.

In small town, USA, Colta City is in need of a hero or two. The police are corrupt and the politicians even more so. Bronson Black, aka Dogboy, has been putting on the mask and cape for a few years now to protect his home town. However, the Colta City Shadows (a collection of kids with super powers) find themselves in some twisted version of a cage fight for a mad scientist and the corrupt Mayor Lane. Dogboy may or may not be able to save them, just like he may or may not be able to save his relationship with his girlfriend Cindy McNeil.

This is another fun addition to the growing Superhero Genre. What I liked most about it is that Dogboy strives to hold on to these high ideals (like trial by jury) while other superpowers have a bit more wiggle room in their moral compass. At the beginning of the story, there are only tiny hints that this will become a big issue by the end. I really like how the author built it up over the story arc.

The various superheroes have interesting, and sometimes very simple, powers. They put them to amusing uses in their quest to do good. One character can walk through walls, another can erase specific memories, etc. Dogboy can fly.

Meanwhile, there are plenty of evil-doers. The police are corrupt and the average citizen is starting to feel the pinch of them and are pushing back. Then we have an arch-nemesis, Mayor Lane, and his immediate followers. They know about the kids and their powers, and they want to make more of them to create a personal army.

In this particular adventure, Bronson and Cindy, and their friend Mr. Harum (spelling?), go through some of Bronson’s dad’s old stuff. Apparently Bronson’s parents are no longer in the picture. His dad use to be a magician or such and they find this metal flying scarab which has a tiny camera. This leads to hard feelings later when Bronson checks on Cindy, and Cindy sees it as spying. Of course, Cindy has her own secrets and these two have some heartache to live through in this book.

Over all, it was a fun ride. The author relied more on plot and character development than on fancy powers, super-gadgets, and big fight scenes than many other superhero novels. I really enjoyed this take.

I received a copy of this audiobook at no cost from the author via Audiobook Blast Facebook in exchange for an honest review (thanks!).

Narration: Nathan Beatty was a good fit for this book. He had great voices for all these teens that aren’t quite adults yet but have to run around making adult decisions. He also had a variety of accents (some regional, some foreign) for the characters.

Dogboy and his mentor, Haram. start and end this tale. His special friend, Cindy and her other cohorts are the main protagonists in the middle. I don't like spoilers in reviews, so I won't do that to you, either. Just know that the story, writing, suspense and fantastic ideas just get better with each book! If you haven't read the others, do yourself a favor and read them. Even if you have to smuggle them away from your family member.
Once again, NB gives a terrific performance voicing the narrative and all the characters.
I received this book as a gift.

DOGBOY RETURNS in Eye of the Scarab

I'm really excited about Dogboy's return. EYE OF THE SCARAB begins another exciting twist in Dogboy's Adventures, THE PHOENIX QUEST ADVENTURES. The stories still keep getting better each time. I've enjoyed listening to this entire collection. This story begins with Dogboy rescuing children from a burning orphanage. Afterwards, Bronson and Cindy go to a storage room that had belonged to his dad and had been given to him by his dad's former partner Wiley Morgan, who was in the last story. While there, he and Cindy find a silver case with a pair of sunglasses and a magical scarab amulet along with some neat old comic books.

In this episode Bronson encounters new characters while still investigating and fighting the familiar ones such as the Mayor of Colta City. Someone has recognized Bronson as Dogboy and holds this over his head. He still lives at the Magic Emporium as Mr. Horum is like a father to him. The three of them, Mr. Horum, Bronson, and Cindy were playing with the scarab and found out it could fly like a drone with eyes. Suddenly Cindy begs off saying she has to go and Bronson decides to follow her because she's been acting suspicious lately. He uses the scarab and watches her slip into Curleyworld. Curleyworld was the closed down amusement park that first appeared in DEMON'S DARE where the Guild of Thieves hang out.

One of the new characters is an invisible black-eyed girl named Destiny. I thought she was an interesting character. He also encounters Willowood again who's still a villain. This is such a fun series with a lot of adventure packed into it and it leaves off with another cliff hanger....Dogboy is an ongoing audio Superhero that's not to be missed. I definitely recommend this audiobook and I can't wait to hear what happens next. BILL MEEKS is an excellent author and continues to bring this series to the forefront.

NATHAN BEATTY is an incredibly good voice actor. All his characters are amazing. Mr. Horum is still great and I really liked the voice of Willowood. Beatty does an outstanding job every time and has a great pace that keeps you on the edge of your seat.