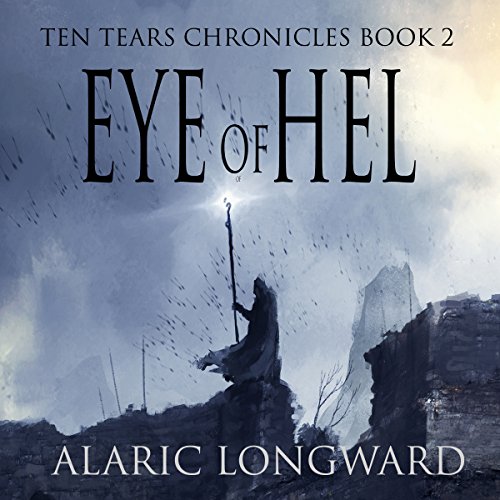 By: Alaric Longward
Narrated by: Kristin James
Try for $0.00

In this epic dark fantasy action story, we again follow the two sisters of Earth, Shannon and Dana, and their magical friends the Ten Tears, as they struggle to find safety in the world of Aldheim, the home of elves.

After grueling two years of slavery under the dread Gorgon Euryale, Shannon has led her friends on a magical escape from Gray Downs, the haunt of the Devourer. Suffering losses during the escape, they hope for better times. However, the Ten Tears find the future bleak, as the portal Dark Prayer drops the young mages into the middle of the Dancing Bay. There begins a leg in their journey to find the Eye of Hel, a long-lost artefact of the Goddess of Rot before Euryale does. Whoever recovers the Eye might bargain with the Goddess Hel for the stolen Horn Gjallarhorn that should restore the gods of the Aesir and the Vanir to the Nine Worlds.

For Shannon, this is a desperate goal, as she is dying of Euryale's Rot and threatened by a Dragon Pact she made with Euryale's slave to gain them all their access to magic. Also, the world of Aldheim is not the peaceful haven of elven kind, but rife with treachery, war, and games of power and Shannon finds herself discovering secrets about the high houses, her companions, her sister's greed and fears, and even the gods.

Will Shannon recover the Eye of Hel?

Eye of Hel is a dark action fantasy novel and the second book in an epic, magical fantasy series called the Ten Tears Chronicles.

What listeners say about Eye of Hel

The story in this book is as captivating and enthralling as in the previous part!

Right back into it!

Everything I love about Book #1 is back MINUS the bipolar henchman! SO YEAH! Even better!

There is some classic redundancy in the first chapter where the author gives us a replay of Book #1 even though I just read Book #1. I can't fault the author on that though. I was annoyed at JK Rowling's paragraph recap in every Potter book, so of course I'm annoyed by nearly a full scene of it. Don't mind me.

What I love about this book, I can't say because they are spoilers. Suffice it to say I am running into Book #3!
LOVED! THIS! BOOK!

will the Gods ever be free

Which character – as performed by Kristin James – was your favorite?

Shannon and Alric and Dana and ,, she made the characters flow

How many times and forms can you use the word incredulous? The majority of BOTH books. Darkly, darkly, darkly. The over use of so many of same words made it difficult to enjoy the story. Hopefully the next book will be well edited.