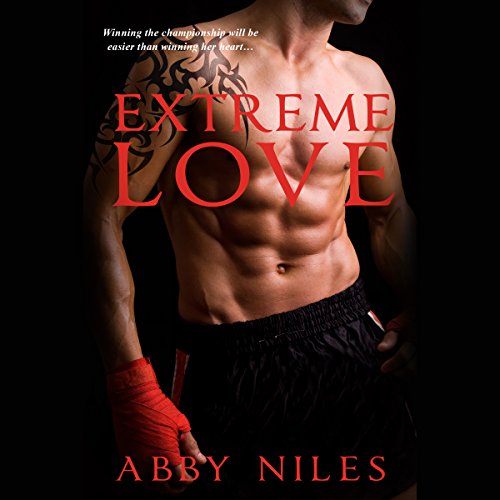 By: Abby Niles
Narrated by: Nicol Zanzarella
Try for $0.00

Dante "Inferno" Jones is used to winning in the ring. But when the MMA fighter meets pretty Caitlyn Moore, he seems to be striking out left and right. The more Cait denies his advances, the more intrigued he becomes by the sharp-tongued beauty. She's a challenge he can't resist.

Comfortable with the average Joe, Cait doesn't get it when the ultramasculine Dante walks into her life and expresses an interest in her. Sure, she's shed 80 pounds, and her confidence is building, but there's nothing spectacular about her. Certainly not enough to hang on to a ripped babe magnet like Dante, whose violent profession, catty groupies, and cruel competitors are already making her life a living hell.

Dante's lighthearted pursuit quickly becomes a battle to win her heart as they find themselves thrown together again and again--and it's affecting his training. Cait won't let him lose the biggest fight of his career because of her, but when her plan to keep him focused lands her in the dangerous clutches of Dante's vicious opponent, there is more at stake than just the championship belt.

What listeners say about Extreme Love

Audible says this book is 18hrs 50 minutes but it is only 9 hours and 24 minutes. But I do have to say it is a good listen.

This Book was an OK listen

Pros:
Liked the hero, exciting fight at the climax of the story between the hero and his opponent who was a very bad guy, good HEA and ending

Cons:
Heroine has a real chip on her shoulders throughout most of the story. The fat comments by adults were juvenile at best and offensive at worst. The heroine has lost 80 pounds, works out every day and is in fantastic shape, so because she is size 12, she is considered a pity date by one and a piggy by others? Give me a break. Really? Is this the world we live in today? Beauty comes in all shapes and sizes. Healthy is beautiful. Also, the bad guy kidnaps the heroine not once, but twice, and no one ever presses charges against him? Maybe the author should consider writing fantasy where the reality check can be left at the door. Narrator was only OK, not able to differentiate between characters much. Except the bad guy, he spoke with a southern accent. Finally, the story was done before. The opponent uses the hero’s girlfriend against him in an effort to win the upcoming fight. Nothing new here, but it makes the meat of the story more important which fell short for me.

In spite of all my cons, the author knows how to use a pen. Will I continue with this series? Not sure, but I will not be opposed to trying this author in the future if the story description captures my attention.

A GOOD START TO A HOT NEW GROUP OF MMA FIGHTERS

An entertaining MMA love story which has Dante, a drool-worthy sexy tattooed fighter, training to take on the fight that could make his career and a heroine that distracts and frustrates him so much that she could end up breaking his career. Because, unlike all the other groupies and easy lays that surround him, Dante finds that he actually has to chase Caitlan which first peaks his interest but it's her personality, looks and their obvious chemistry that keeps him hot on her trail. I liked the fact he had to up his game and work harder for her and he did it in such a caring and thoughtful way.

There's plenty of drama and angst supplied by his immoral sneaky opponent and Caitlan's constant insecurities and image worries which caused further issues between them. However, I did find that there was a bit too much inner torment with her size.

Dual POV's good narration, a few sex scenes and, when the uninhibited carefree Caitlan finally emerges to let Dante catch her, there are some really nice romance scenes.

Worth a credit? An enjoyable easy-going listen and YES creditworthy.

loved the story so much. couldn't put it down for a minute. i am going to listen or read the entire series.

Two things killed this story - 1) The narrator, not the worst ever, but just not a good performance. She sounded like she had a sinus cold. 2) Too many unbelievable circumstances. There are just some things that leave me thinking - where are the cops? do people really say stuff like that? I spend a good amount of time in a gym and can say - no, it is not realistic at all. Book 2 is much better.

As a long time listener this is my first review and I make it because this book really frustrated me. As a women who has had weight problems my whole life I figured this book would be very relatable, well I was wrong. This woman constantly talks about changing perceptions and loving the person you are regardless of your size. But she is horrible to herself. She has no self confidence even though she recently lost 80 lbs. She can't accept that this impossibly perfect man could even be interested in her. Her horrible self opinion and degrading self esteem frustrated me to no end. She needs to take her own advice but refuses to. Dante is the saving grace to this book because he is so sweet, I can't figure out why he even likes Caitlyn, she really isn't that nice of a person because she is so down on herself. Enough with the rant, I did like the book but really couldn't truly enjoy in and this definitely will not be a repeat listen.

I really enjoyed the story. Kate was strong, but also sensational not a normal love story. Danti was a also awsome. If you like rocky you'll totally love this read. I jumped up and down so engulfed in this great story. The narrator rocked!

A lovely, love story and although Dante a fighter with alpha male tendencies I'd have said he was smitten, his journey falling in love and showing her was easy/gentle.
Narrator was a bit breathy/whiney and put a feeble spin into the story from a female perspective -insecurity does not equal feeble, therefore I struggled with listening.
Some contradictions in the story. Initially, it was about being healthy and fit, not about weight loss; The story pushed this mind set and right at the end the author said about her very successful weight loss programs (I didn't think it was about weight loss I thought it was about accepting yourself and living a healthy life.) so that one sentence made me sigh, a small oversight in the grand scheme of things.