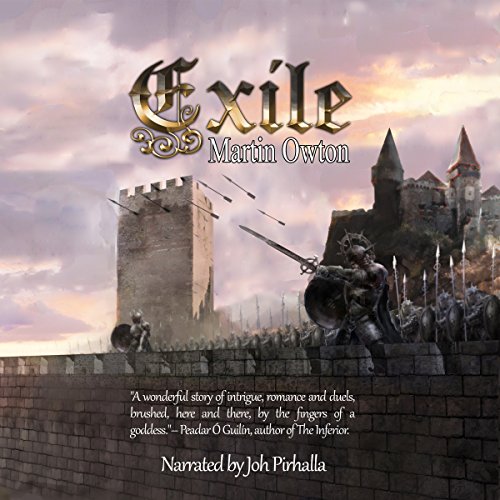 Aron of Darien, raised in exile after his homeland is conquered by a treacherous warlord, makes his way in the world on the strength of his wits and skill with a sword. Both are sorely tested when he is impressed into the service of the Earl of Nandor to rescue his heir from captivity in the fortress of Sarazan. The rescue goes awry. Aron and his companions are betrayed and must flee for their lives. Pursued by steel and magic, they find new friends and old enemies on the road that leads, after many turns, to the city of the High King. There Aron must face his father's murderer before risking everything in a fight to the death with the deadliest swordsman in the kingdom.

What listeners say about Exile

Would you listen to Exile again? Why?

Plotting royal families, much sword-play, a dash of bawdiness, and enjoyable characters. Shades of Game of Thrones. Owton creates a rich world. Great fight scenes. The women of the court are particularly fun. Especially the Queen who of course is the wisest of them all. The narration performance was exceptional. So many rich characters made richer by John Pirhalla. There are over 40 voices in the novel. I look forward to Book 2.

There is no doubt that “Exile” is a well thought-out, intricate, character-driven story of high calibre. I wanted – really wanted – to give it 5 stars, but a couple of things stopped me from being able to do so. Martin Owton has carved an intriguing fantasy filled with a plethora of characters; his story-telling skills, author voice and command of prose are unquestionably high. And yet… somehow I found it difficult to feel fully immersed as the conversations flowed and the plot developed. I WANTED to the whole way through – I was even rooting for it to happen. I think the problem may lie in a certain lack of compatibility between me and Martin’s style; Exile has a feel of being peppered with ‘court intrigue’ (not really an element I enjoy much of) and most of the lady characters seem to fawn over the main character, adding a heavier dose of ‘romance’ to the story than I want/need when reading a fantasy novel. Another problem may have been that the audio version, while superbly narrated by John Pirhalla, didn’t really ‘individualise’ various major players of the story; there are a fair few lady characters, as I mentioned, and they all seemed to have the same soft, well-spoken vocal delivery, plus more than several of the male characters similarly suffer from having a shrewd, untrustworthy, commoner style – not subtle, but quite distinct – that made it feel like I was listening to the same character but with different names. This, I suspect, is what led to the detachment, but I do have to stress that the narration was otherwise expertly done. I would imagine that anyone reading the book rather than listening to it will not have this problem. I further suspect that had I read the book rather than listened to the audio, I may have been fully immersed and could have given it 5 stars, despite it containing elements that aren’t to my tastes. While I wish that I’d felt more investment in the characters and the plot progression while listening to the audio version, I’m not beyond recognising a praise-worthy novel when I read (or listen to) one. I refer you back to my opening statement that Exile is a well thought-out, intricate, character-driven story of high calibre, and, as such, I can certainly recommend it to anyone who enjoys their fantasies laced with romance and court intrigue.