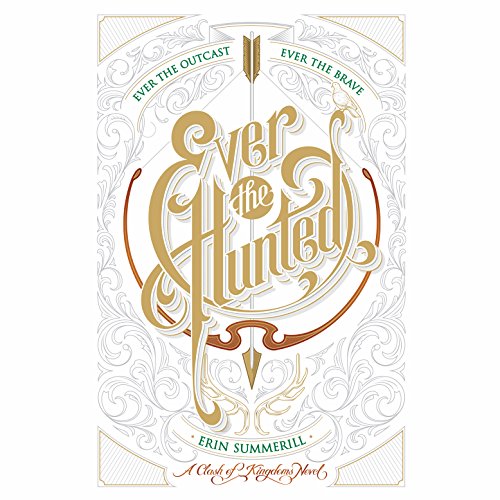 By: Erin Summerill
Narrated by: Helen Johns
Try for $0.00

Seventeen-year-old Britta Flannery is at ease only in the woods with her dagger and bow. She spends her days tracking criminals alongside her father, a legendary bounty hunter - that is, until her father is murdered. The alleged killer is none other than Cohen McKay, her father's former apprentice. The only friend she's ever known. The boy she once loved and who broke her heart. She must go on a dangerous quest in a world of warring kingdoms, mad kings, and dark magic to find the real killer. But Britta wields more power than she knows. And soon she will learn what has always made her different will make her a force to be reckoned with.

What listeners say about Ever the Hunted

Compelling story with vivid, relatable, loveable characters and a creative magic system. My interest in this world and it's inhabitants is definitely piqued. Was just released, but I'm already looking forward to more from Britta.

Kept me thinking about the story

WHAT IT'S ABOUT
Seventeen year-old Britta Flannery is at ease only in the woods with her dagger and bow. She spends her days tracking criminals alongside her father, the legendary bounty hunter for the King of Malam—that is, until her father is murdered. Now outcast and alone and having no rights to her father’s land or inheritance, she seeks refuge where she feels most safe: the Ever Woods. When Britta is caught poaching by the royal guard, instead of facing the noose she is offered a deal: her freedom in exchange for her father’s killer.

However, it’s not so simple.

The alleged killer is none other than Cohen McKay, her father’s former apprentice. The only friend she’s ever known. The boy she once loved who broke her heart. She must go on a dangerous quest in a world of warring kingdoms, mad kings, and dark magic to find the real killer. But Britta wields more power than she knows. And soon she will learn what has always made her different will make her a daunting and dangerous force.

MY TAKE
Ever the Hunted did something I always want a book to do--make me think about the characters and the story even when I'm not able to read it. In this case, I listened to the audiobook, and the narrator did a terrific job.

Britta's stronger than she knows, having grown up with a father who had prestige (the king's bounty hunter) yet she was spurned because of her mother--a native of an adjacent country where they allowed magic casters. As a result, Britta's a jumble of loneliness and desperation and determination.

After he father is murdered, she's set on a path she doesn't want to go on--find the man accused of his murder, Cohen Mckay. He just happens to be her only friend and the boy she had once declared feelings for.

Summerhill does a fabulous job setting up the emotions, and the sexual tension between Britta (Dove) and Cohen once they meet again is well played. It's a journey of discovery for Britta and it's full of tension and danger and discovery. Because even as she and Cohen are hunting the real murderer, they are also being hunted.

The story is kind of cliffhangerish. There's a satisfying dose of resolution at the end even as it sets up the next book so you know the story's not complete yet.

I'll be looking forward to the next book.

Ever the Hunted was a great adventure/romance with a perfect narrator. Very rarely does a narrator enhance my enjoyment of a story so much. The only reason I gave it 4 stars instead of 5 was that the ending was weak. I found myself not caring who the real murderer was or why he did what he did. Their final mission in the castle was hard to believe and also boring. The romance angle with Leaf felt shoe- horned in. Otherwise it was good.

I began by reading the physical book and found it a little difficult to get into. So I decided to give the audio book a try. I really liked the narrator, I had not imagined her actsent when reading it myself but it really helped with the feel of the character. I did have to speed it up to 1.25 speed which is not something I normally do but it made the story flow better at that setting I think. The story was enjoyable overall and will be continuing the series. Probably will just stick to audio book though.

Not that it actually is a retelling of Robin Hood but it gives you the feel of a wrongly accused criminal who is in hiding feel. The magic element in this isn't like your normal every day magic, the author draws you in and makes you want to learn more about this world! There is a romance through the book that will melt your heart in the not-too-overdone sort of way. Can't wait to read more!!!

I really did enjoy the journey of this book. Nice walk threw the forest & met some nice people but overall it’s very predictable and unoriginal. I still very much recommend this book if your in the mood for young people love and a cottage that needs saving. *warning* the main character is a girl that thinks poorly of herself but everyone around her just thinks she is the best thing ever. ( getting really tired of that) 🏹

The narrator reads like every single line is part of a romance scene. Super breathy and has little to no fun with it. I'd rather get a physical copy.

This story is well written and thrilling. Couldnt "put it down" !! I felt every emotion the characters felt.

Everything a YA Fantasy Should Be

Well written with just the right amount of action to keep me hooked on listening, string female character, great romance. I can’t wait for the second one!

This is my kind of book. Action, Adventure, Fantasy, twists and turns, always thinking. I enjoy the ride. Can't wait to read the next book in the series.