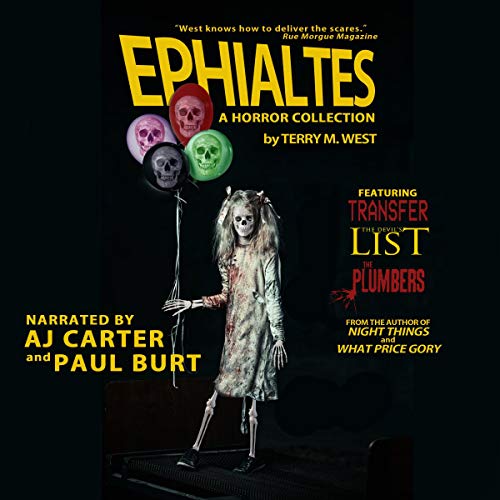 "Transfer" - Prepare to scream forever! Howie Payne and Nick Enlow work the midnight shift at Big Carl’s Video Transfer and Media Services. An odd AVI clip begins to appear in their public drive on a nightly basis. At first Howie and Nick think it’s a serialized art house horror film someone on the day shift is sending them in secret. As the clips progress, however, the now obsessed duo discover something deeper and darker in the videos. Horror author Terry M. West would like to introduce you to the Green Room and its primary occupant, The Screamer.

"The Devil’s List" - This story was inspired by shocking true events. The Devil's List is a dark tale of insanity and horror from Terry M. West. In the small Texas town of Pleasant Storm during the summer of 1985, Chuck Beall embarks on a journey of brutality and madness. Convinced he's possessed by a demon that compels him to kill, Chuck's murderous attention shifts from random transients to those he blames the most for his abusive past.

"The Plumbers" - Liam and Pierce live in a country ravaged by a strange sickness. It’s called the CRUD and it turns its victims into rabid killing machines known as the Plaguers. The authorities wage constant war to keep the Plaguers from overrunning the towns, boroughs, and cities. Liam and Pierce are plumbers sent to the infected zones to keep the taps and sewers flowing. They preserve the dwindling resources of their homeland. Come along in the van and spend a typical day with Liam and Pierce. A day of digging holes, twisting pipe, soldering joints, measuring twice, cutting once, plunging the bog, battling the Plaguers in gruesome fashion, and telling crude jokes. No matter how dangerous or dirty the task, it’s just another day on the job for the Plumbers!

"What impresses me most about Terry's work is the vast scope. This man loves his horror in every shade and flavor." (Hunter Shea, The Jersey Devil)

"Terry M. West may not be a household name, but he should be." (Frank Michaels Errington's Horrible Book Reviews, Cemetery Dance)

What listeners say about Ephialtes

I totally enjoyed these 3 short horror stories. They were diverse something for every horror fan as gross, gory and sexual as West writes. Recommend to anyone who enjoys horror shorts with decent narration. I was given this free review copy audiobook at my request and have voluntarily left this review. THANK YOU

Transfer:
Great short story about an entity one would expect to find on Creepypasta. Completely unique and well worth a longer story to completely delve into the entity. For now we have something mysterious that doesn't give us all the answers. Have to say, I really enjoyed the chemistry between Howie and Nick and felt like I could moonlight with them as a video transfer tech. I really cared about them and despite how short the story is, I really connected with them and was hoping for the best. I really enjoyed the backdrop for the story. It has a bit of The Ring feel to it, but only in that it revolves around watching a mysterious video. While I'm sure it isn't a super fun job, something about working at Big Carl’s Video Transfer and Media Services, with Nick and Howie really appealed to me and made the story that much better to listen to.

AJ Carter did a great job with the narration. He put a lot of energy and emotion into the characters and really helped bring the story to life. Haven't come across his narration before, but look forward to hearing more.

The Devil's List:
Terry M West has a huge spectrum of writing and this story just shows how versatile he can be. Like most of his horror stories, this one is dark, gruesome, and very twisted. Out of all of West’s stories I have had the pleasure of listening to, this one was the hardest one to listen to. Definitely a book for hardcore horror fans.

Paul Bert did a great job with the narration. I liked his character voices and thought he really told the story as it was meant to be told. His cadence and energy he puts into his narration did a great job getting me creeped out.

The Plumbers:
This was quite a funny story for being a zombie story. I really liked the two main characters banter back and forth. I am going to have to remember the cat tail joke. But seriously, this was a great story that, and I'm tired of saying this, was a great unique perspective on zombies. For those fans of Terry M. West, you will know what to expect based on some of his other horror/comedy stories. My only real complaint is that I need more tales of Liam and Peirce now.

Paul Bert did a great job with the narration. He really pulled out all the stops with his character voices. The accents were awesome and he really made me enjoy the story that much more.