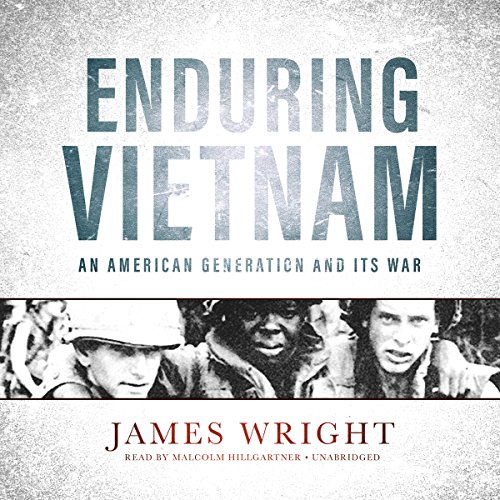 By: James Wright
Narrated by: Malcolm Hillgartner
Try for $0.00

The Vietnam War is largely recalled as a mistake, either in the decision to engage there or in the nature of the engagement. Or both. Veterans of the war remain largely anonymous figures, accomplices in the mistake. Critically recounting the steps that led to the war, this book does not excuse the mistakes, but it brings those who served out of the shadows.

Enduring Vietnam recounts the experiences of the young Americans who fought in Vietnam and of families who grieved those who did not return. By 1969 nearly half of the junior enlisted men who died in Vietnam were draftees. Their median age was 21 - among the non-draftees it was only 20. The book describes the "baby boomers" growing up in the 1950s, why they went into the military, what they thought of the war, and what it was like to serve in "Nam" - and to come home. With a rich narrative of the Battle for "Hamburger Hill", and through substantial interviews with those who served, the book depicts the cruelty of this war and its quiet acts of courage.

What listeners say about Enduring Vietnam

Superb, heartfelt reading. First half of book too repetitive. Second half smoother, easier to follow attentitively.

Lots of statistics and analysis. Incite full on how veterans were treated and how they felt about their experiences both during their tour and after they returned stateside. I definitely respect the men who served many of whom are my friends and I also feel lucky I did not have to endure this awful experience.