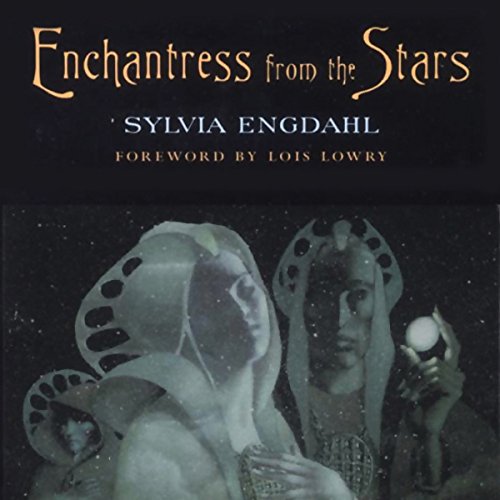 Enchantress from the Stars

By: Sylvia Engdahl
Narrated by: Jennifer Ikeda
Try for $0.00

A Newbery Honor Book and a Book Sense 76 Selection, Enchantress from the Stars is a science-fiction classic. Three alien races meet on the small green world of Andrecia. The Imperial Exploration Corps wants to claim the planet for its own, but the Anthropological Service stands in the way. And when young Elana makes contact with native Georyn, a love story exploring the very depths of human emotion unfolds.
©1999 Jennifer Ikeda (P)2006 Recorded Books

What listeners say about Enchantress from the Stars

Modern Despite it's Age

Although originally published in 1970, Enchantress from the Stars has a surprisingly modern feel to it. Aside for the book cover, it would fit right in with today’s books. Enchantress from the Stars is a unique mix of science fiction meets fantasy. Engdahl seamlessly combines a technologically advanced alien race with a world set in a medieval era while creating a story that is timeless and appealing to all ages.

A destructive alien race called the Imperials have settled on the planet of Andrecia to exploit it’s resources and displace it’s less advanced people. This isn’t the first time this race has invaded other planets and their actions have attracted the attention of another alien race even more advanced than they are. To stop the Imperials, a team of agents from this advanced race is sent to Andrecia to reverse the Imperials’ invasion without harm to all sides. Only the team cannot stop the Imperials themselves, they have to work with the natives to stop save Andrecia. The book alternates perspectives giving you an understanding of all sides; Andrecian, Imperial, and the team of Agents.

The main character and primary narrator is Elana, a current student at the Academy learning about Youngling planets. She naively stows away on a spaceship to be apart of her father’s mission to save the planet of Andrecia. Her lack of training is a problem and against the rules but the team has to make the mission work with Elana. Along with her father and her boyfriend, Evrick, the team works together to find a native or natives suited for the job of stopping the Imperials.

Georwyn, Terwyn, and their brothers are young native men walking through the enchanted forest on a mission to slay the dragon (which is actually an Imperial machine that mines the planet’s resources). They seek the reward that the King offers in return for slaying the dragon. While hunting the dragon, they encounter an old man with magical abilities and an enchantress who offers advice in slaying the dragon. Of all the brothers, Georwyn proves himself to be wise beyond his years and well suited for the challenge of slaying the dragon.

Jeral is a medic for the Imperials and after his coworkers kill and imprison natives, he starts to second guess his mission. He’s been told that the natives of Andrecia are not really human and therefore their actions to take over the planet are justified. As the mission goes on, he sees more in more that the people of this planet are human and he no longer wants anything to do with the mission.

Enchantress from the Stars is a well written, original, and heartwarming story. In addition, the audiobook narrator told this story beautifully. It’s even a won a few awards. With that said, I have to say that I didn’t love it but also I didn’t hate it. It isn’t a book that pulls you in and never lets you go but more so an enjoyable read that you can easily put down and pick up again later. Overall, I really to do recommend others give Enchantress from the Stars a try.

A wonderful book for young readers

I enjoyed this book. I feel that it was for young readers. It had a simple story line. A good book to listen to as a family.

half a century later...

This book was published in 1970. As I write this review, the current year of our Lord is 2020. Happy Birthday. I first read this book in Jr. high. It was on the William Allen White book list for the year 1973. I even voted for this book at the time, and yes I did grow up in Kansas, the land of Oz. I absolutely loved the book as a young teenager, and enjoyed it just as much as a 60 year old man. It is a marvelous tale of sci-fi and adventure. The love story developing as the adventure progresses, adds another layer of investment for the reader. Even though I vaguely remembered the story line, it was still as captivating, and enjoyable the second time around... even if it did tug at the old heart stings now and then. Looking back on all of the books that I have read in my life, this book is easily one of the best, one of the more touching books of my life. In fact, of all of the books that I read in my first 20 years of life, I can now, 40 years later, name only 2. The Enchantress From The Stars is one of those books. That is why I did a search for it after getting the Audible app, and I am glad that I did. I have a feeling that I will listen to this again... more than once. What was the second book from my youth? Island of the Blue Dolphins. Another good book, but as they say... That is another story.

The story is about a girl from an advanced civilization (the Federation) who helps a young man from a iron age civilization turn back alien invaders. The girl cannot tell the boy who she really is by the laws of her people so she pretends to be an enchantress and the alien invaders are an evil dragon and his minions. As they spend time together training to fight the dragon, she finds herself falling in love with the boy who is willing to risk his life for the sake of his people.

This story works on all levels, as science fiction, as a fantasy, a heroes' journey, a romance and as a YA novel. I loved it.

The narrator is good. She sounds like a teenager and she emoted beautifully.

So, this book had a really great story line and reminded me a lot of Star Trek, especially in relation to the prime directive. But the character development was done poorly, the character relationships (protagonist & father, protagonist and betrothed, protagonist and love interest) were such junk! Protagonist chooses duty over alleged love (unconvincing because we do not see the main characters really fall in love until the last few pages of the book). She claims to take splice in knowing he will choose another of his kind and live happily....which is not what happened according to the epilogue. The civilization on the verge of invasion is saved but the author makes it so that we don’t care if they are saved or not, most are not good people. The only invading individual worthy of being saved ends up arrested..... nothing in this book warrants the award it received.... I’m so mad I wasted 10 hours of my life.

If you could sum up Enchantress from the Stars in three words, what would they be?

I like how the main character is trying to tell the story from her perspective and the perspectives of other characters in the story.

What does Jennifer Ikeda bring to the story that you wouldn’t experience if you just read the book?

Her voice is perfect for the young adult female who is the narrator of the story.

Elana is part of a special team that travels the universe to guide lesser developed civilizations to the correct path for peak technological advancement. They find a civilization in the midst of what would be similar to Medieval Europe where there’s still the hope of magic and fear of curses. Elana must help her team remove the threat to the planet’s development all while keeping her identity secret from Georyn, a medieval man she finds herself drawn to. Jennifer Ikeda is a well practiced narrator that is able to deliver a solid performance. I enjoyed the different points of view—Elana who is playing the role of an enchantress while pretending her everyday technological devices are magical, and Georyn who seriously believes that Elana is an enchantress and that he is a chosen one meant to perform the will of magic. The setting of the novel is so unique and obscure that I did not know the novel was originally published in 1970, not 2003. All a reader needs is an open mind and an imagination. I am glad that this novel has been reissued many times to be reintroduced to different generations of teens. In fact, there has been a reissue as recently as 2018 with a brand new, and engaging cover that I believe will draw teens in. I would say teens the ages from 12 to 18 would all enjoy the interesting concepts Engdahl brings up.

On the surface, this novel fits my stereotype of YA fiction: a simple plot that moves along quickly, while being light on world-building and character development. Georyn was just a bit too perfect, always doing and saying exactly the right thing. Further, the auxiliary characters tended to be very predictable. However, all that being said, I really loved the story. It combined the moral pondering of Star Trek with a touch of Star Wars mysticism. This is especially notable considering it was mostly written before either of those two. Some of the dialogue from Elana's father was truly profound and thought-provoking, vaguely reminding me of the weightiness that Captain Picard brought to STTNG. At a high level, I would call it a cautionary tale of prejudging other cultures from within your own moral framework. For this audio version, the narrator actually sounds like a teenage girl, and so does a very good job of bringing Elana to life.

Had to read this for school.

A more interesting and exciting story. And a better narrator voice.

What was most disappointing about Sylvia Engdahl’s story?

The long dragging conversations that seem to last chapters...

Would you be willing to try another one of Jennifer Ikeda’s performances?

overall this book was extremely boring and hard to comprehend. I would not recommend this book to anyone.

I was really interested in hearing this book, but the narration is slow and dry and bored me to the point of giving up.