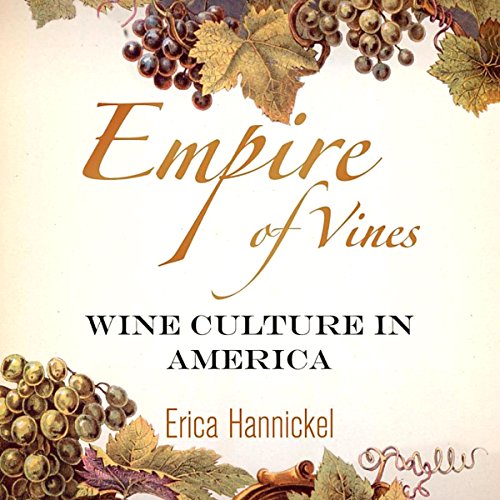 By: Erica Hannickel
Narrated by: Scott Carrico
Try for $0.00

Empire of Vines traces the development of wine culture as grape growing expanded from New York to the Midwest before gaining ascendancy in California - a progression that illustrates viticulture's centrality to the 19th-century American projects of national expansion and the formation of a national culture.

Empire of Vines details the ways would-be gentlemen farmers, ambitious speculators, horticulturalists, and writers of all kinds deployed the animating myths of American wine culture, including the classical myth of Bacchus, the cult of terroir, and the fantasy of pastoral republicanism. Promoted by figures as varied as horticulturalist Andrew Jackson Downing, novelist Charles Chesnutt, railroad baron Leland Stanford, and Cincinnati land speculator Nicholas Longworth (known as the father of American wine), these myths naturalized claims to land for grape cultivation and legitimated national expansion. Vineyards were simultaneously lush and controlled, bearing fruit at once culturally refined and naturally robust, laying claim to both earthy authenticity and social pedigree. The history of wine culture thus reveals 19th-century Americans' fascination with the relationship between nature and culture.

"An original, broadly researched, and engaging work." (Marina Moskowitz, University of Glasgow)
"In this wonderfully researched and highly listenable book, historian Erica Hannickel offers a compelling look at the intertwined story of wine, vineyards, and American identity." (Paul Bogard, author of The End of Night)

What listeners say about Empire of Vines

Review of Empire of Vines

Well done and very interesting. I learned much from this book. Scott’s diction and clarity is so well done. I recommend highly.