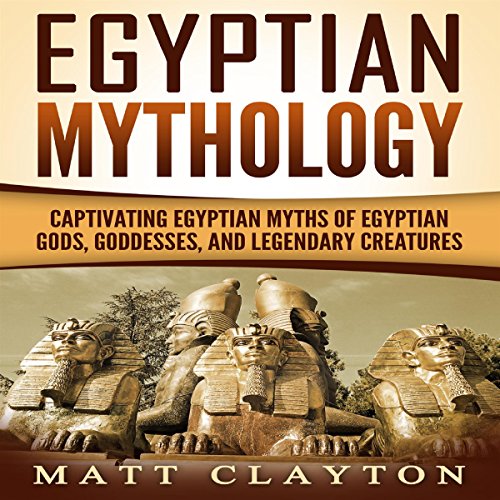 A captivating collection of the most popular Egyptian myths.

It can be challenging to find a comprehensive and engaging collection of Egyptian myths considering the number of versions and translations available. However, look no further, as you have found a captivating audiobook that includes many of the most popular Egyptian myths in an easy-to-listen-to format.

This audiobook is divided into four parts. The first, titled “Cosmological Narratives,” contains myths concerning the creation of the world and how the ancient Egyptians understood the structure of the underworld and the passage to the afterlife.

“Myths of the Gods” contains the great myths of the gods Ra, Isis, Osiris, Horus, and Set.

The third section contains two political myths, the tale of the birth of Hatshepsut and “The Tale of the Famine”, both of which are stories created by rulers to consolidate their power by claiming divine intervention and favor.

Other stories, similar to what we today would call fairy tales, make up the last section of the audiobook, and they are full of magical wonders, animals that speak, and gods who reveal themselves to human beings and take an active role in their affairs.

In this audiobook, you'll find the following Egyptian myths and topics covered:

Get this audiobook now to learn more about Egyptian mythology.

What listeners say about Egyptian Mythology

This is written in plain language and can be easily used for personal as well as reference in the field of religion and religious iconography. Beautifully photographed and helpful in understanding the incredible complexity of ancient Egyptian religious development.

A great but misplaced hillbilly voice butchers what could have been a sublime performance of an eternally divine story. He repeatedly mispronounced names like the name of the goddess Nut (Nooht) by talking about her like she's a nut in a Planter's mix.

Terrible pronunciation of the names

Makes one cringe when you hear the butchering of the names...Nwt pronounced like nut in walNUT, and that’s just one example.

I enjoyed this approach to mythology. Folklore from another culture can be tricky without a base of information to work from. This book gives you a nice foundation.

I actually have learned the type of stuff I wished to learn. I guess this book has stirred up my appetite for more.. when it comes to the mysteries of ancient civilizations.

This is a terrific analysis and discussion of the varied and complex religious development and influence of the ancient Egyptians. I have been fascinated with the connections among the religious traditions of mankind and have found many seminal concepts and ideas in this book.

This book has every single God and Goddess of Ancient Egypt listed in it and their history. I do not know of a more complete book than this. If you're into the history of the Gods/Goddesses of Ancient Egypt, then I would highly recommend this book to you.

Very thorough. Very detailed. And full of information. Great break down of the Egyptian Pantheon and religious figures. I purchased as a gift. I may purchase for myself.

A good reference for anyone interested in ancient Egypt, where the Gods and Goddesses were part of everyday life.

The book is excellent, the information is great, but I absolutely hate the way this book is organized.

The Egyptian Gods and Goddesses seem to have really lived on Earth. The more I study ancient Egypt, the more I wonder if there had been a more intelligent being coexisted with humans.

Having listened to Stephen Fry and Neil Gaiman give enthralling retelling of Greek and Norse Mythology, I was hoping to find something similar on Egyptian myths.

Unfortunately the delivery here is matter of fact. It feels like simply a list of facts given in a near emotionless way.

It is a good researched Book on Egyptian Mythology and its religious beliefs. I loved the way this author has done amazing work.

I think this book is an excellent introduction to the roles and mythology of the Egyptian deities. Despite how my review sounds, I enjoy it.

I love Egyptian mythology, but I really just use it for reference when I need it. Some of the other sections on the origins of the deities and such are great information as well.

The book is complete, thorough and easy to understand and reference. I loved it and recommend it.

This is a wonderful presentation of ancient Egyptian religion. The author opens with a detailed account of religious practice and the ritual of death, tracing its regional variants and historical development. Next, he presents a complete, detailed encyclopedia of the pantheon.

This is a very well organized book, presenting accurate information on Gods big and small, and their importance in the religion and history of Egypt. Very informative, making this book a superior reference book for students of Egyptology.

I think that this is an amazing book! If you are interested in ancient Egypt this is a book for you! The book is very informative and full of useful stuff.