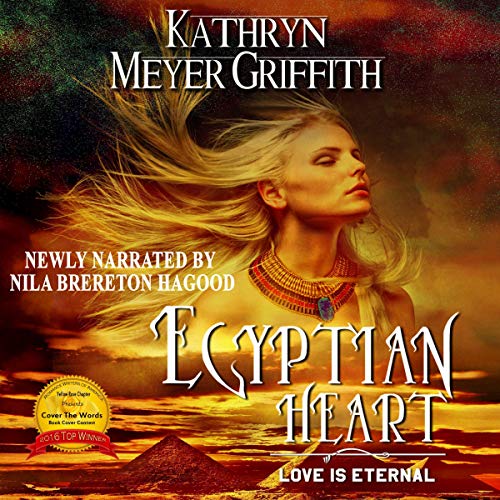 Maggie Owen is a beautiful, spirited Egyptologist...but lonely. While staying in Egypt on a grant from the college, she searches for an undiscovered necropolis she’s certain lies below the sands beyond the pyramids of Giza. Even this discovery doesn’t give her the happiness she had hoped it would. There has always been and is something missing. Love.

Then, her workmen uncover Ramose Nakh-Min’s ancient tomb, and an amulet from his sarcophagus hurls her back to BC 1340 where she falls hopelessly in love with the man she was destined to be with, noble Ramose, who faithfully serves the heretic Pharaoh Akhenaton and his beautiful queen Nefertiti.

She’s fallen into perilous times with civil war threatening Egypt. She’s been mistaken for one of Ramose’s runaway slaves and with her blond hair, jinn-green eyes, and fair skin, she doesn’t fit in. Some say she’s magical and evil. Ramose’s favorite, devious Makere, attempts to have her killed.

The people, angry at the pharaoh Akhenaton for setting his queen Nefertiti aside and forcing them to worship his god, Aton (instead of their many Egyptian gods), are rising up against him.

Maggie’s caught in the middle of it in a dangerous land and time she doesn’t belong in. In the end, desperately in love with Ramose, will she find a way to stay alive and with him in ancient Egypt - and make a difference in his world and history? Because, Maggie has finally found love.

What listeners say about Egyptian Heart

listened straight thru(on a hike). liked the lead in the book, wanted to meet her. another good book.
i got a free copy of this book

This book is a historical ancient Egyptian romance with a time travel twist. I loved the storyline. Maggie is a college student on a grant in Egypt. She goes back in time and finds the man of her dreams, Ramose. I was mesmerized by this book and stayed up way too late listening...I just had to know what happened. I would recommend this book for anyone who likes time travel novels or is into Egyptian history.
"I was given this free review copy audiobook at my request and have voluntarily left this review."

Finding more than wished for in an Egyptian Tomb!

This is another Time Travel Story about an Egyptologist that finds an unopened Tomb in Egypt. Somehow, someway an Amulet sends her back in time to Ancient Egypt. When she gets there she finds her Soul Mate and falls deeply in love with him.
The story gets interesting when her new loves ex-lover trys to kill her and she finds that Egypt is not what she expected at all. I received this Audio Book for free in exchange for an unbiased review. Real Good Story!

I have to admit I am always a little leary with romances because they can quickly turn into a bodice-ripping story. This one although there were a few times it looked like it might go that way, it did stay a clean romance. I loved the setting and the research the author put into the history. The descriptions brought it to life, and the characters were entertaining and relatable. I found my self drawn into the story and had a hard time putting it down. I would place this as a young adult read. This book would be great for those who like the historical fiction and romance genres, especially if they have any interest in ancient Egypt.

This is not my usual listen, I'm not big into romance stories but this one intrigued me with it's Egyptian theme, I'm also pretty interested in all things Egyptian so add in Nila Brereton Hagood as the narrator and I thought I couldn't go wrong.

I was right. It's a fantastic story about Maggie Owen who's been saving herself for her one true love, whom she can't seem to find. So travelling to Egypt to work on a dig was, for her, a chance not to be missed, with no husband and children to keep her at home, she was off. And headed a lot further away than she could ever have imagined.

I did find Maggie's internal monologues rather annoying at times but with Nila narrating it just didn't matter. This book is well researched, well written and thoroughly enjoyable.

I was lucky enough to receive a free copy, at my own request, and leave this honest review entirely volutarily.

My advice is, to buy this book.

Maggie Owen is a beautiful, spirited Egyptologist...but lonely. While staying in Egypt on a grant from the college,
great story line