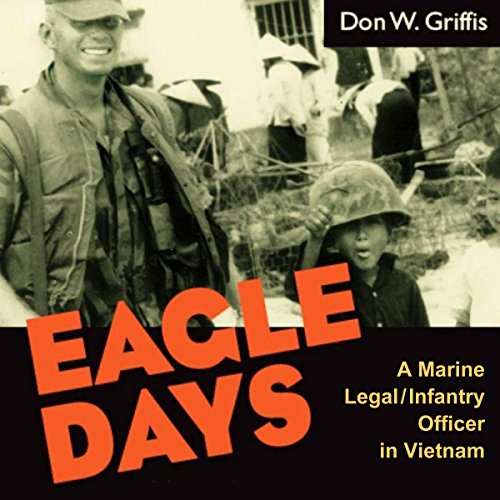 Much has been written about America's war in Vietnam, and an enduring and troubling subtext is the composition of the body of soldiers that made up the US troop deployment: from the initially well-trained and disciplined group of largely elite units that served in the mid-sixties to what has been termed an "armed mob" by the end of that decade and into the early 1970s. Drug use, insubordination, racial antagonism that often became violent, theft and black market dealing, and even "fragging" (murder of officers and senior noncoms by disgruntled troops) marred the record of the US military presence.

Don Griffis served in twin roles. He was a legal officer, charged at various times with the task of both defending and prosecuting servicemen. At the same time he led combat patrols in "search and destroy" missions against the Viet Cong and North Vietnamese enemy. Eagle Days is a remarkable account of Griffis' personal record of experiencing what the military should do best-meet, engage, and defeat the enemy-and what it becomes when esprit de corps, discipline, and a sense of purpose decay.

"I found it hard to put down. The author is an excellent writer and storyteller. His writing style is crystal clear, interspersed with subtle witticisms that had me chuckling out loud. I got a good feel for the kind of Marine officer that he was-a wise decent sort with lots of common sense." (James P. Coan, author of Con Thien: Hill of Angels)
"The book is written with verve, humor, and poignancy and provides wonderful insight into a number of significant aspects of the Vietnam War." (Peter Maslowski, coauthor of For the Common Defense: A Military History of the United States of America)