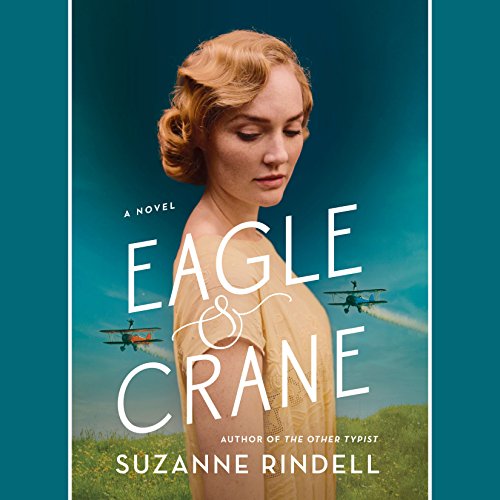 By: Suzanne Rindell
Narrated by: Elizabeth Romanski
Try for $0.00

Two young daredevil flyers confront ugly truths and family secrets during the US internment of Japanese citizens during World War II, from the author of The Other Typist and Three-Martini Lunch.

Louis Thorn and Haruto "Harry" Yamada - Eagle and Crane - are the star attractions of Earl Shaw's Flying Circus, a daredevil (and not exactly legal) flying act that traverses Depression-era California. The young men have a complicated relationship, thanks to the Thorn family's belief that the Yamadas - Japanese immigrants - stole land that should have stayed in the Thorn family.

When Louis and Harry become aerial stuntmen, performing death-defying tricks high above audiences, they're both drawn to Shaw's smart and appealing stepdaughter, Ava Brooks. After the Japanese bomb Pearl Harbor and one of Shaw's planes mysteriously crashes and two charred bodies are discovered in it, authorities conclude that the victims were Harry and his father, Kenichi, who had escaped from a Japanese internment camp they had been sent to by the federal government. To the local sheriff, the situation is open and shut. But to the lone FBI agent assigned to the case, the details don't add up.

Thus begins an investigation into what really happened to cause the plane crash, who was in the plane when it fell from the sky, and why no one involved seems willing to tell the truth. By turns an absorbing mystery and a fascinating exploration of race, family, and loyalty, Eagle and Crane is that rare novel that tells a gripping story as it explores a terrible era of American history.

What listeners say about Eagle & Crane

This book captured me from the beginning, and even at 13+ hours it was never slow. The characters were interesting, their interaction, emotional connections, backstories, all worked together for a great story. I could be a bit critical of the final denouncement, it was a little melodramatic, but the rest of the book was so enjoyable that I'm not going to quibble. One of the best books I've listened to this year. And an excellent narrator ! I hope she does more readings for Audible.

I have been eagerly awaiting this book since finishing Suzanne Rindell's last novel, Three-Martini Lunch. Three-Martini Lunch, and her debut, The Other Typist, probably set up higher than reasonable expectations for this novel. It was good... but not quite as good as what I'm used to.
She is a terrific author for period and place, and her main characters are interesting and complicated. However - and this book shows this more than her others - her secondary characters seem to just appear and disappear, or live and die, without us getting to know them. In some cases, I had to think back on previous chapters to remember how certain people were related to the main characters.
Overall, however, I did enjoy this book, and this performance, and will definitely check out another book from both author and narrator when they become available.

An unusual plot with such diverse happenings as Japanese-American friendships, barnstorming for a living, Japanese internment camps, a possible murder and a love triangle. There was enough action to keep me riveted. The characters were well developed and revealed gradually to increase suspense and mystery. Earl, the hustler of the group, was very unpredictable due to his drinking. It was a very dysfunctional group of individuals who somehow managed to be somewhat successful during a time when sentiment against the Japanese was running high. Barnstorming was illegal as they were doing it and the group always seemed to be one step ahead of the law. I recommend this book.